The Exile and Resurrection of Marc Chagall 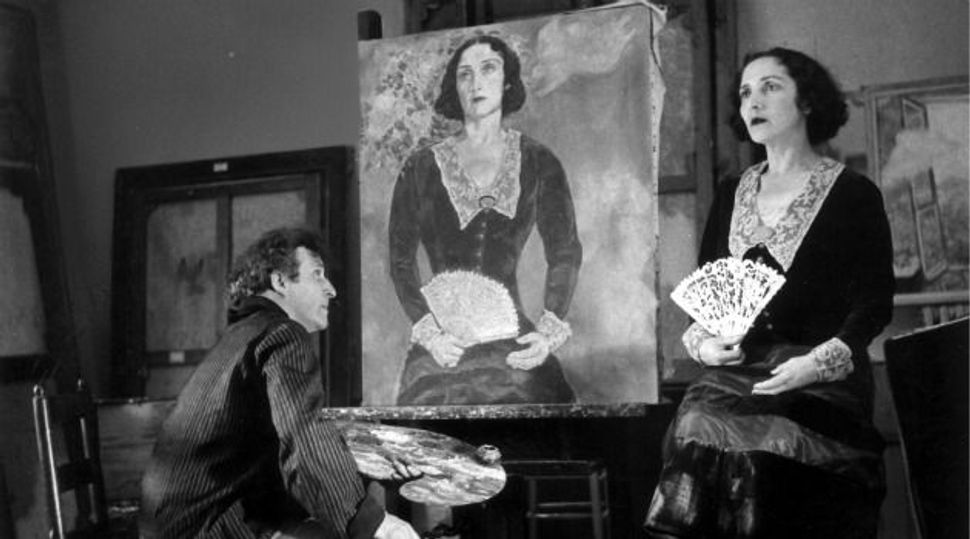 Green in Black and White: Marc Chagall is seen here in his studio working on his painting ?Bella in Green,? which was completed in 1935. Image by Courtesy of Jewish Museum New York

Marc Chagall. The name alone conjures a world — a simple, superstitious village, smelling strongly of hay and manure. The single story houses all have thatched roofs. The people are poor, uneducated, but their lives are filled with magic. Angels and ghosts wander among them. Sometimes devils, too. And that fiddler you hear on the roof might just be a cow. What does it all mean? Go ask the rabbi. He’s floating over there under the full moon.

Chagall looked at Judaism, that most textually entrenched of religions, and imagined a visual symbolism for it capable of expressing both its cultural history and the mystical reach of its spirituality. He created an iconography — culled from his own memories of growing up in Russia — around the religion and succeeded so splendidly at thrusting this iconography into the public imagination that his work now seems almost a caricature of itself and, by extension, a caricature of the Jewish people.

“Chagall: Love, War, and Exile,” the new show of his work at the Jewish Museum New York, curated by Susan Goodman, does not try to challenge the popularly held image we have of Chagall, but it does complicate it. To a large degree, it succeeds at reminding the viewer that the artist was a more serious thinker, and his work more nuanced, darker, angrier and full of despair than the Jewish minstrelsy he’s come to represent.

The show focuses on three particularly difficult periods in Chagall’s life: his exile from Russia after the revolution, and from France during World War II and the melancholy years following the death of his wife, Bella, in 1944. It proposes that art is a form of autobiography and asks the viewer to read Chagall’s life — and the historical changes he lived through — into the paintings.

His use of color, his compositional debt to the icon paintings of his Russian homeland, and the various other formal and conceptual inquiries contained in Chagall’s work are, when noted at all, mentioned glancingly and presented as incidental to the journey of his life. This is a populist approach to art history: accessible, driven by character and story and nary a theory in sight. But then, Chagall has always been a populist artist and his work encourages this sort of approach.

What we learn about Chagall is that he lived a primarily secular life and was first drawn to the Jewish themes in his work not by an overwhelming religious urge but by his fear that the culture in which he’d been raised was in danger of extinction during the upheavals of the Russian Revolution (a cause he’d at first supported, but later denounced).

Wrapping himself up in memory and nostalgia, he painted rabbis and synagogues and villages crawling with bearded figures not to glory in the religion, but to sentimentally linger in its trappings to cushion the pain of what he feared might be its disappearance. This sentimentality and nostalgia became a way for him to create a cultural and historical identity distinct from any yearning to practice the religion.

The images collected in the exhibit highlight Chagall’s unorthodox approach to religion and his appropriation of Christian imagery for use as metaphors for the plight of the 20th century Jew.

There’s a preponderance of mothers clutching babies to their breasts — Madonnas and children — usually fleeing the scene of an atrocity, the village on fire, the men hanging from trees. This is Mary, not the mother of God but the mother of a small Jewish boy who is not old enough to realize his world has just been destroyed.

In what is surely the most provocative gesture in the exhibit, one entire room is filled with paintings Chagall made of the crucified Christ. Though they were created mostly in the years leading up to and during World War II, they date back at least as far as his 1912 painting “Calvary,” and at first, they seem to be metaphors for the artist himself.

In “Calvary,” that same Jewish baby, saved by his mother from the burning village, is now martyred — his parents stand below him reaching out as though in hopes of catching him if he falls —but martyred to what cause? Chagall doesn’t say. The claustrophobic strictures of Jewish culture perhaps.

In the 1930s and ’40s, the image takes on a less personal, more political meaning. The crucified Christ becomes the Jewish people. In painting after painting, he depicts bearded men, sometimes wearing tallits or the familiar brimmed caps he so often places on his peasants who are tortured and dying with no hope of resurrection. The image loses all Christian context. Its power resides in its depiction of a murdered Jew, dead at the hands of a European empire (which isn’t so far from the historical truth).

At this point in the exhibit, we’re a long way from dancing roosters and whimsical lovers floating in the trees. The story “Love, War, and Exile” tells is one of a gradual descent into nightmare, of a people’s sentimental celebration giving way to a testament to their extinction.

And after all of this death and destruction, it’s jarring to return to Chagall’s softer, more sentimental side at the end of the exhibit. The final room is dedicated to Bella, and though it contains numerous paintings exploring his grief at her early death from a viral infection, its focus is on the way he worked through his grief, allowing Virginia Haggard McNeil, the woman Chagall’s daughter hired to look after him, to reopen his heart to the possibility of love. It points toward what feels like a happy ending tacked onto a grim, haunting tale in order to make it more palatable to the public — a resurrection of sorts, the very element of the Jesus story that the artist stripped from his crucifixions.

Joshua Furst is the author of “The Sabotage Café” (Knopf 2007). He writes frequently about the arts for the Forward.

“Chagall: Love, War, and Exile” will run through February 2, 2014 at the Jewish Museum New York.

The Exile and Resurrection of Marc Chagall