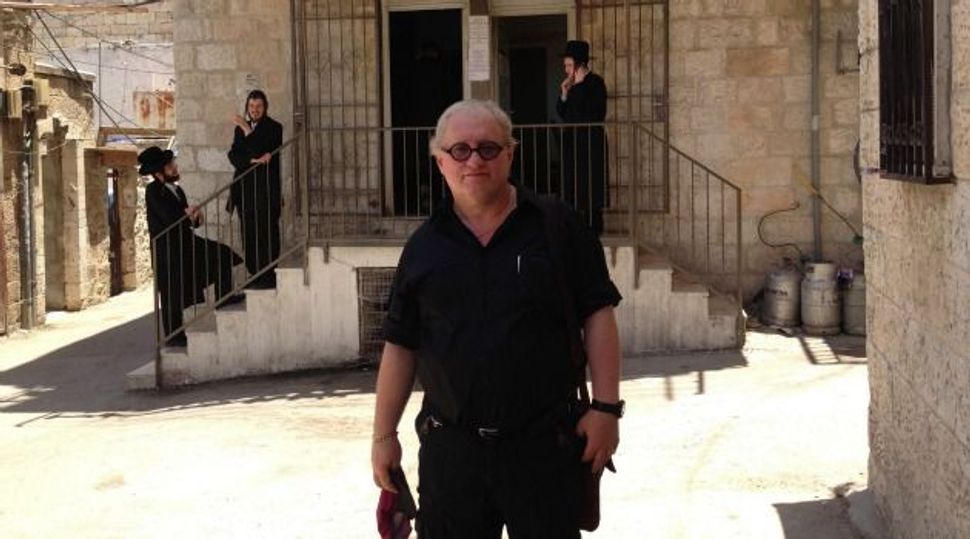 Casting the First Stone: Author Tuvia Tenenbom on assignment for his next book, tentatively titled ?Alone Among Jews.? Image by Isi Tenenbom

As the world busies itself with the dead people of Syria, I walk the streets of holy Jerusalem in search of truth and wisdom, hoping to find a solution to this horrible situation that I could share with the leaders of the goyishe velt, and maybe prevent the unnecessary death and destruction that is taking place a scant few kilometers away.

As I walk humbly about the ancient streets, surrounded by the most righteous living and dead rabbis, I notice many advertisements on the walls announcing that a famous mystic, Rabbi David Batzri, will be “repairing sins” this very day.

Maybe, I say to myself, I could save the world of its sorrows by learning how to repair sins from the righteous Rabbi Batzri, the head of Yeshivat Shalom, the yeshiva for mystics in Jerusalem.

And so, I walk to the Yeshiva.

Rabbi Batzri is not in attendance when I enter, but other rabbis are, including his son.

Aside from rabbis, people are sitting at tables, reading aloud mystical texts, which include a brochure prepared by Rabbi Batzri. The sacred texts, as I should have expected, contain highly classified mystical information. For example: If you spilled your seed, even once in your life, you will be sent to burn in hell for the rest of eternity.

This is awful news, I feel, but soon enough Rabbi Batzri enters and makes us feel better. God is merciful, he and other rabbis sitting next to him tell us, and He doesn’t really want His Chosen People to suffer eternal hell after all. Instead, as a result of His merciful nature, the various rabbis let us know, God is offering a solution to the seed spiller: a 420-day fast that will cause the sin of spillage to be erased and forgiven.

Rabbi Batzri is distributing to all attending sinners a printed sheet of the exact number of fast days that are required to erase various sins.

Sleeping with a married woman: 325 days.

Nope, this is not a typo. Playing with your penis is not only worse than accidental spillage of seed, but it is also much worse than murder.

In other words: America should leave Assad alone and declare atomic war on you and me.

But then, at the exact same moment, I suddenly realize that I’m in bigger trouble than I ever bargained for. Fasting for 4,000 days means 11 years of no food. How in hell am I going to survive?

Rabbi Batzri, however, doesn’t see it my way. Each one of us, he says, should be fasting for 26,249 days (or about 72 years) if he or she wants to be purified of all sins.

Twenty-six thousand two hundred forty-nine days? That’s eternity! How could I, or any of the rest of us here, survive so many days of no eating?

Could I still convert to Islam?

Rabbi Batzri is apparently not impressed by these concerns of mine. In the accompanying pages given to us, he lists the following:

And then he clarifies: We don’t have to do any of the above acts to be reincarnated as a she-ass or a Jewish whore. Nope. God, he says, will bring us back to life as a donkey if we simply imagine sleeping with a married woman, or in a camel if we just dreamt about a little romantic affair with our father’s woman.

This all is terrible news for me. Not only am I not going to save the world, but also I now cannot even save myself.

Fortunately, we soon learn, Rabbi Batzri had an audience with God and the angels Gabriel and Rafael just before the event, and the three of them came up with a brilliant plan: fasting pay. He explains to us how this all works: We pay instead of fasting — 101 shekels a month for 26 months, and we will be cleansed of all our sins.

The people around me listen and immediately take out their credit cards.

But just before they are charged, a new ceremony starts. Those about to be cleansed of their bank and Visa accounts are told to tie their feet with special cords. This is to purify the soul, because God won’t take money from those who are not humble.

Being the weak man that I am, I leave Jerusalem and go to Safed. I calculate that I could purify my soul more cheaply by immersing my sinful body in the famed ritual bath of the Holy Ari, a place known among the mystics of many generations as being capable of purifying all sins.

At least it’s worth a try.

At the entrance to the ritual bath, I read that women are not allowed to bathe here and that anyone who breaks this rule will be “bitten by a snake.”

I conclude that if there are snakes around, no matter what the reason, I better run away fast.

What should I do next?

I ask some Haredi leaders who Rabbi Batzri really is but they seem offended by my question. “He is a righteous mekubal (kabbalist),” they tell me. How about the snake instructions at the ritual bath? This is a known fact, I’m told.

Now I’m not sure what’s worse: Assad’s chemical weapons or the mystic’s snake attacks? Fighting forever in Syria or fasting for 26,249 days in Israel? Eventually finding yourself dead in Saudi Arabia or being reincarnated as a Jewish whore in Israel?

Between you and me, if I’m ever given a choice I think I’d like to turn into a goyishe she-ass.

Tuvia Tenenbom is the author of the German bestseller “I Sleep in Hitler’s Room.”