Why Being Barbra Streisand Can Be a Drag 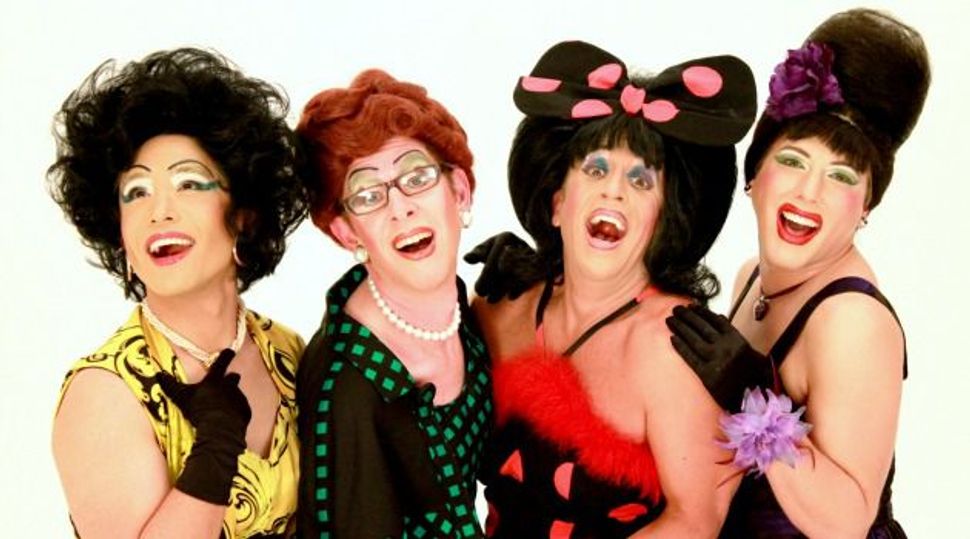 Steven Brinberg does not want to be called Ms. Streisand, Barbra or Babs before he steps onto the stage fully transformed into the singing icon. Until that moment, address him as Steven, please.

Indeed, it takes 90 minutes for the metamorphosis to be completed, starting with layers of makeup, followed by dress and wig. The last bit of costuming is the long nails. “The nails really make me feel very Barbra!” he said.

Brinberg is undoubtedly the premier Streisand impersonator. “It’s Barbra at prices you can afford,” he quipped during an interview with the Forward. “I always had an affinity for Barbra. She’s our leader. Now she’s played Israel.”

Along with performing on the cabaret circuit and trendy hot spots across the country, Brinberg frequently does his shtick at temple and Jewish Community Center events. Being Jewish shapes his humor while at the same time forces him to avoid Jewish caricatures that might be construed as anti-Semitic. And as a gay man, he is able to view Streisand from the outside, but identify with her in a way that a straight man could not. “I’m once removed,” he said.

Female impersonators — though some prefer to think of themselves as actors — may be playing real life divas, while others inhabit fictional creations. They may not reference their ethnicity at all, or they may lightly incorporate it into their stage personas or make it their act’s centerpiece. The most notable example is Amichai Lau-Lavie’s Rebbetzin Hadassah Gross, who was a motivational speaker and life coach and used biblical stories as object lessons. The act has now been retired.

In the 1950s, Milton Berle was legendary for his drag performances. “Though I can’t help thinking of it as burlesque, more than drag,” said Shneer, suggesting that cross-dressing straight men emerge from a somewhat different sensibility than their gay counterparts.

Drag, as we know it today, was defined by such vaudevillians as Julian Eltinge and Bert Savoy, who made their mark in the early 20th century. Lesser known names of the era created a more sexualized genre that continues to influence contemporary performers.

According to Shneer, Jewish drag entered the public imagination with Harvey Fierstein’s 1982-83 Tony Award-winning “Torch Song Trilogy,” whose gay protagonist Alan Beckoff made his living as a female impersonator.

Fierstein’s newest play, “Casa Valentina,” slated to be produced by the Manhattan Theatre Club this spring, is inspired by the real-life but little known community of cross-dressing Jewish heterosexuals who gathered each weekend to don women’s clothes at a 60s-era Catskills resort.

Like good burlesque, successful drag is comic, flamboyant and subversive. It’s arguably an expression of rebellion, but the artists we interviewed say their Jewish heritage is not a target. Keith Levy, aka Sherry Vine is pure Borscht Belt with a campy overlay. “I’m a little sassy, a little trashy, but not cheap. I’m Barbie on crack,” she says in her act.

“It’s heightened theater and the humor is self-deprecating,” she told the Forward. “I’ve never been told I’m offensive.”

All the artists come from homes that are accepting of their homosexuality and careers. Alexander Heimberg, who was formerly a drag performer by the name of Miss Understood and runs the 20-year-old booking agency, Screaming Queens, says that gentile drag queens tend to have a harder time because Jews aren’t subject to Christian dogma and its concept of hell. “No one ever told me I was going to burn in hell,” he said.

Brinberg says he understands that a man in drag could make some people uncomfortable without knowing exactly why. “It forces them to think about sexuality,” he said.

Discomfort can exist on several levels, not least watching a performer who is twice marginalized (as a Jew and as a gay man) and often over-the-top in his presentation of self, especially on stage.

“Jewishness is visible in gestures, in the voice, in the body’s compartment, and it’s often seen as excessive — too much, too big, too loud,” said Stacy Wolf, professor of theater at the Lewis Center for the Arts and director of Princeton Atelier at Princeton University. “Similar descriptions can be made about drag performance.”

“Drag brings together Jewish irony and homosexual camp,” added Shneer. “Satire and irony are a deep part of drag and one could say that comes from Jewish humor. The seams are supposed to be visible.”

Gay men and Jews also have similar relationships with their audiences, Shneer said. They both seek community with theatergoers who share with them common experiences, values, references and language.

“It’s a chance for all of us to drop the mask,” said writer, actor and drag artist Charles Busch who, early on in his career, was known for playing wild Hollywood divas and even one raging Upper West Side Jewish matron, Miriam Passman, who had her sights set on a cabaret career. “You loosen up when you’re with your own,” he said.

But Busch, who is now playing a character in drag in “The Tribute Artist” at Primary Stages in New York, also suggests that as a Jew he brings an inherent “gravity” to the proceedings despite the hilarity.

Ira Siff, founder of the now defunct legendary drag opera company, La Gran Scena, says that through parody he and his colleagues were protesting what they saw as the homogeneity of art at the time. “We were poking fun in an affectionate way, but it came out of deep caring,” he stressed. “That’s Jewish.”

Even his comically grotesque diva persona, Vera Galupe-Borszkh, hinted at a certain dark side. Though the comedy emerged from a Catskills universe, her one-liners were invested with an unspoken backstory, according to Siff. Vera never stated that she was Jewish, he says, but she was conceived as such, starting with her generic Eastern European accent. “The audience understood she wasn’t a sunny gen tile,” recalled Siff, who now serves as a commentator on Metropolitan Opera radio broadcast. “There was that element of loss.”

Similarly, the Kinsey Sicks, a Beauty Shop Quartet,” are constantly driving home political or cultural commentary with such songs as “Christmas Carols and Other Jewish Music.” Diversity and tolerance are built into the material, says Irwin Keller, who is one of the founders of the 20-year-old troupe and plays a controlling, prim lesbian.

But Jewish mothers, “Jewish American Princesses,” the Holocaust and Israel are off-limits. “Israel is just too painful to Jews, whatever side they’re on,” noted Keller, who also serves as a Reconstructionist rabbi. Most of the quartet’s audiences are Jews of all stripes, he says.

Indeed, the drag artists interviewed all have large Jewish followings, even among the Orthodox. Brinberg recalls performing at a birthday party for an Orthodox Jewish woman whose husband hired him because even in drag, Brinberg was still a man and therefore the husband could watch him perform.

The fact that Brinberg is a gay man prancing about as a female was either not acknowledged, or simply considered low on the blasphemy scale compared with a biological woman strutting her stuff on stage.

So what are female impersonators saying about gay men in general and Jewish gay men in particular? The effeminate Jewish man is not a new stereotype. Now add the homosexual/drag element.

The performers insist stereotypes are not necessarily negative and that if anything, their schtick is an expression of homage to effeminate men. They own, embrace and celebrate the stereotypic image. They also vehemently deny the existence of any misogyny in their performance, asserting that drag gives them permission to have fun with their own femininity by, at least in some instances, playing women sporting overstated makeup and cartoonishly large boobs that resemble bookshelves.

Shneer does not entirely agree. “Misogyny is built into the performance,” he admitted. “But because it is embedded in a gay context the misogyny has gone away. It is misogyny without the teeth.”

He says it’s no fluke that the gay man’s icon is Judy Garland — not simply because she was a larger-than-life fabulous singer, but because of the underlying pathos of her story.

Brinberg sees no underlying pathos in either Streisand or himself, just a strong New York Jewish connection. They could be pals, he says, and only half-kiddingly speculates that should he ever meet her, he’d ask her where in New York he could get good old-fashioned chow mein, suspecting she would have the answer and might even join him on a trip to some obscure outer borough Chinese restaurant that still serves grandma’s fare.

Streisand has not yet come to see him perform, but Brinberg is sure she knows who he is. He says he’d like to believe he has become a role model for her.

A former writer for Backstage, Simi Horwitz writes frequently about show business for the Forward.

Why Being Barbra Streisand Can Be a Drag