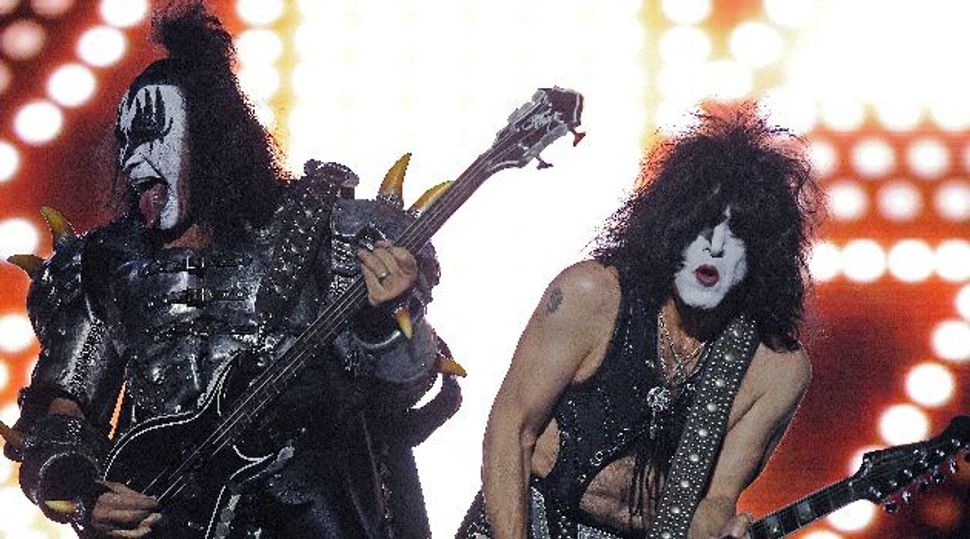 I’ll admit that I was a little late to the KISS party. In the mid-1970s, while most of my elementary school friends were cranking “Destroyer” and ooh-ing and ah-ing over the photo booklets from “Alive!” and “Alive II,” I was gravitating towards the more pop-oriented likes of ABBA and the Electric Light Orchestra. While I could see the attraction of the makeup, stage blood and pyrotechnics, the idea of joining the KISS Army seemed about as appealing as enlisting in the real thing.

It wasn’t until nearly a decade later that I developed a real appreciation for the self-proclaimed “Hottest Band in the Land.” My curiosity piqued by the Replacements’ viciously rocking cover of “Black Diamond,” I borrowed “Alive!” from a college friend, and was immediately won over by the brash guitar riffs and catchy choruses of “Strutter,” “Got to Choose” and “Firehouse,” as well as the hilariously over-the-top stage banter of frontman Paul Stanley, who came off like a cross between a tent revival preacher and an amped-up drag queen.

Stanley quickly became my favorite member of KISS. Gene Simmons spit blood and breathed fire, Ace Frehley had the rock ’n’ roll swagger (and stagger) down, and Peter Criss was, uh, there; but I loved the way Stanley gleefully zigzagged across the lines between soulfulness and crassness, fabulousness and ridiculousness, all while playing a mean rhythm guitar and belting out lyrics about sex and partying with a set of pipes that put most metal vocalists of the era to shame. The man clearly knew how to work a stage and an audience, and he made no apologies for it.

Unfortunately, the public persona that he put forward in interviews — especially after 1983, when the band made the controversial but career-saving decision to ditch the makeup — seemed to be largely devoid of the flamboyance and roof-raising bonhomie that his “Starchild” character exhibited onstage. Like his KISS colleague and co-founder Simmons (who was at least usually good for a couple of borscht belt-style wisecracks), Stanley tended to adopt a humorless, defensive posture when speaking to journalists, as if being able to rub the band’s multi-platinum success in the face of critics both real and imagined was his main motivation as a musician. And as Stanley’s frank and occasionally heartbreaking memoir “Face The Music: A Life Exposed” reveals, that wasn’t far from the truth — though few at the time could have guessed the true cause of his defensiveness.

The man who would be the Starchild was born Stanley Bert Eisen in 1952. The son of Jews from Poland and Germany who were too distracted by their own marital strife (and their struggles with Stanley’s mentally ill older sister) to offer him much in the way of love or encouragement, Stanley was born with a congenital deformity called microtia, which left him with only a deaf stump where his right ear should have been. The deformity made him a target for bullies, and caused him to be painfully self-conscious in social situations; meanwhile, his partial deafness made it difficult for him to follow lessons in the classroom, yet neither his parents nor his teachers seem to have drawn any correlation between his hearing problems and his poor grades.

As with so many musicians and artists of his generation, Stanley’s life was changed forever by the Beatles’ Ed Sullivan appearance. But “Face The Music” is far less prosaic than the usual boy-meets-guitar rock star narrative; for while music gives Stanley a career path, therapy is what ultimately proves to be his salvation. Overwhelmed by anxiety and desperate for help, a 15-year-old Stanley makes an appointment for himself at Mount Sinai’s outpatient psychiatric clinic. (His father’s helpful response: “You think you’re the only one with problems?”) From this point on, therapy and self-analysis become as crucial to Stanley’s story as his desire for stardom and need for external validation.

“Face The Music” follows the trajectory of KISS’s career, and contains numerous entertaining stories of the band’s triumphs, frustrations and excesses. But it’s all essentially the backdrop for Stanley’s journey of self-discovery. He looks to KISS to give him a sense of belonging, only to be continually frustrated by the selfishness of Simmons and the self-destructiveness of Frehley and Criss. (Stanley’s continually evolving, 40-plus-year partnership with Simmons, a man who seems to revel in having no inner life whatsoever, is one of the most fascinating aspects of this book.)

Stanley lives for his time onstage, during which he can hide his anxieties and neuroses behind his exaggerated front-man persona. But offstage, he finds that his success fails to alleviate the crushing loneliness he feels in his soul. “Fortunately,” he writes, in a line that could have been cribbed straight from the Starchild’s book of stage banter, “just because something turns out ultimately not to be the right road doesn’t mean it ain’t fun driving on it.”

Ultimately, a lead role in a Los Angeles production of “Phantom of the Opera” provides him with a personal catharsis, and leads to his involvement with AboutFace, a charity devoted to helping children with facial differences. Stanley finds true fulfillment there, as well as in his cozy home life with his second wife and their children. KISS continues to rock, but it’s no longer the focal point of his life; in fact, much to Simmons’ horror, he’s not at all averse to turning down lucrative tours in order to spend more time with his family — and given the sheer joy that radiates from the page when he talks about gardening with his children, one can certainly understand why.

“Face The Music” is an engaging and inspiring tale, told with far more honesty than you’d expect from a man who was once afraid to open up to even his own bandmates. At 62, Stanley has finally found the key to happiness — and if he wants to “shout it out loud,” he’s more than earned the right to do so.

Dan Epstein writes frequently about the arts for the Forward. His latest book is ‘Stars and Strikes: Baseball and America in the Bicentennial Summer of ’76.’