Why Jews Suffer From a Quilt Complex 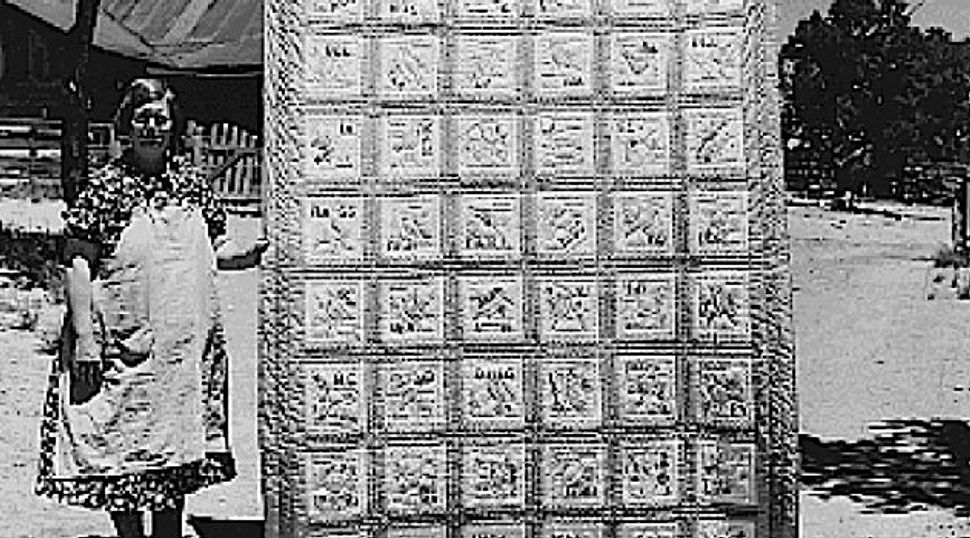 American Gothic: During the Great Depression a woman poses with her quilt of 48 states. Image by Wikimedia Commons

The much-vaunted distinctiveness of the Jews resides in what they eat, how they attend to their prayers, and the means by which they earn their keep. Their distinctiveness, as it turns out, is a matter of textiles, too. No, I don’t have in mind Torah mantles or challah covers, but something far more quotidian: bedding. East European Jews and their descendants, as I’ve just discovered, had little truck with quilting. Feather bedding was one thing; patchwork quilts quite another.

I never paid much mind to the relationship between quilting and the Jews. A champion sleeper, I have for years nestled contentedly under my fluffy, lightweight down comforter without giving any thought as to why my home and my parents’ home and my grandparents’ homes were entirely quilt-free. But recently, thanks to one of those round-robins made possible by the Internet in which a question from one colleague prompts a query to another and then another, I found myself thinking of little else.

What set things in motion was an innocent enough series of questions posed by a renowned collector of textiles: How was it, he wanted to know, that hardly any quilts from the Old World or, for that matter, from the New, bore the imprint of a Jewish hand? How was one to account for the paucity of Jewish quilts? Was it possible that there was no tradition of quilting among the Jews?

I didn’t have an answer, not at first. But I was sufficiently intrigued to try to rustle up one, and so I turned to colleagues-in-the-know who, hailing from places as diverse as South Carolina, New England, Washington, D.C. and Poland, weighed in with ideas and theories of their own. Each of the participants in this far-reaching conversation contributed a scrap or two of information, and before you could spell “n-e-e-d-l-e,” we had ourselves the virtual equivalent of a quilting bee, if not a clear-cut explanation.

Some historians, deploying a comparative perspective, accounted for the absence of a Jewish quilting tradition by pointing to the ways in which Jewish women differed from other women when it came to socializing. The conditions that made quilting a popular pastime in the United States — conditions that were rooted in the “spinning frolics” of the late 18th and early 19th centuries and in the particularities of the American domestic economy — simply didn’t obtain among Jewish women in East Europe. Besides, they had no time for it.

Others more attuned to the specific rhythms of East European Jewish history introduced geese — yes, geese — into the proceedings. In many of the East European towns and villages our ancestors called home, the raising of geese was a veritable cottage industry, a popular economic pursuit. What’s more, in an adumbration of the “nose to tail” movement that characterizes contemporary American cuisine, East European Jewish households made as much use of the goose as possible: rendering it into fat, say, or foie gras, and using its feathers to keep warm. Under these domestic circumstances, downy comforters trumped patchwork quilts as the preferred form of bedding among the Jews.

Meanwhile, scholars of textile history brought to bear another product — cotton. Its widespread availability in the United States, they claimed, gave rise not only to a quilting tradition that made use of inexpensive, mass-produced cloth fashioned out of cotton, but, more strikingly still, to its revival. During the early 20th century, agents of the United States Agricultural Extension Service promoted the use of cotton products by giving workshops in quilt and mattress making. East Europe, in contrast, had little access to cotton, let alone agricultural extension programs to endow the product with a new lease on life.

Other factors summoned into being in the course of our wide-ranging discussion included comparative rates of industrialization and the development of fashion consciousness. Both modern phenomena, whose histories are intertwined, gave rise to the manufacture of scraps on the one hand and, on the other, to the discarding of the old in favor of the new. Fabric that had either ended up on the factory floor or been cast away by women cleaning out their closets lent itself to being refashioned — repurposed, in today’s parlance — into quilts. It seems likely, then, that those places where industrialization was slow to take root and where the allure of the new was barely within reach — places like East Europe and the Pale of Settlement, for instance — were simply not conducive to quilting.

Piling up, one atop the other, these explanations seemed to me to be nothing short of dazzling. Whether or not they held water was almost beside the point. From where I sat, what mattered most (and, I have every reason to believe, mattered equally as much to those engaged in this conversation as well) was the accumulated weight of evidence, the process by which it was assembled, piece by piece, much like a patchwork quilt. Look at what we took in — geese, cotton, infrastructure, structures of feeling — as we sought, each in our own voice and from our own scholarly perches, to make sense of the woven, the patched-together, the befeathered. If ever there was a test case for the value of studying material culture, this was it: The humble quilt, the stuff of domesticity, encompassed a much larger world beyond the confines of the bedroom.

The donor who initiated this inquiry into the quilt and the Jewish question is now the recipient of more information than he probably ever anticipated or even wanted. As for me, I’m grateful to him and to my generous colleagues for having the opportunity to participate in this latter-day version of a wild goose chase.

Why Jews Suffer From a Quilt Complex