Hadar Offers Orthodox Women a Glossy Magazine of Their Own 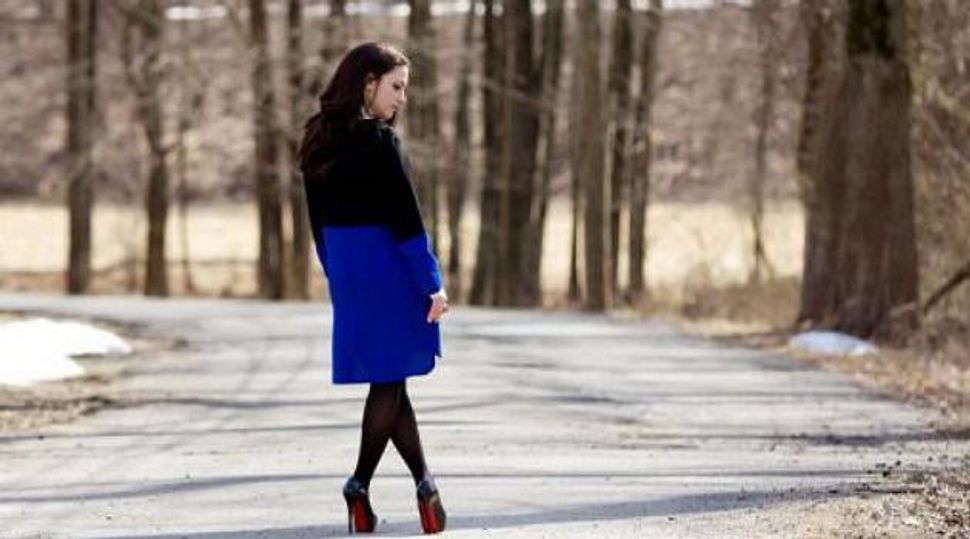 (Haaretz) — Think Vogue, circa 1929 – a drawn silhouette of a fashionably, but conservatively, dressed woman, holding a weekend bag.

A women’s fashion magazine without a celebrity on the cover is a real rarity today, what with Kanye and Kim peering from newsstands this month – but Hadar Magazine, a new publication for Orthodox Jewish women, finds it necessary in order to appeal to its wide target audience.

“We decided we won’t have a photograph on the cover,” editor Bari Weizman says. “For the sake of sensitivity. It was a heated debate, but that’s the compromise we agreed on.”

It’s a cold night on Manhattan’s Upper West Side, where Weizman and coeditor Shevi Genuth meet me at kosher Italian restaurant Noi Due for dinner and sangria. A few blocks away, at Lincoln Center, the evening runway show of New York Fashion Week is wrapping up (with Vivienne Tam’s earthy collection, apparently; Diane Von Furstenberg showed hers earlier in the day, but photojournalists are still grumbling that she didn’t disclose her location in advance).

“We realized that our community needed this kind of a magazine,” Genuth adds, fixing her head scarf. “There’s nothing like it: We offer fashion and lifestyle for modern-thinking Orthodox women. Until now, we have had two choices: either a secular women’s magazine, glorifying values we may not subscribe to, or Haredi women’s magazines which don’t publish pictures of women on principle, even if the target audience is entirely female,” Genuth says.

“I saw it as a business opportunity, I’ve always wanted to be an entrepreneur,” says Weizman, a graduate of Yeshiva University’s Sy Syms School of Business, with a smile.

Many a religious girl has lingered in a department-store dressing room, growing despondent over a too-short hemline or sighing over how nice a certain dress looks — before the requisite sleeves are added and the neckline is filled in. A magazine like this offers options that don’t require trips to fabric stores and seamstresses, or wearing tight, long-sleeved shells under short-sleeved tops. “You can take our styles right off the pages,” the editors tell me with an excitement that I wonder if my secular friends would understand.

Hadar Magazine has the “working religious woman” in mind. It tackles not only the endless problem of finding modest wear, but also the kind of issues addressed in mainstream magazines and the kind they don’t. Mainstream U.S. women’s magazines, for example, may spend pages and pages on a Thanksgiving dinner that is little different from the weekly Friday night dinner prepared by their readers’ Jewishly observant counterparts. Hadar addresses this and other realities of being an Orthodox woman: budgeting for holiday planning, managing household expenses and yeshiva tuition, interacting in a secular workplace that isn’t friendly to Sabbath observance, traveling with kosher restrictions, facing physical and mental health challenges, and even, perhaps shockingly, the emotional difficulties of complying with women’s commandments of ritual purity. “There are many things that we Orthodox women don’t know how to discuss openly,” Genuth says. “It could be a remnant of old-school European mentality, of ‘we don’t discuss this.’”

Hadar is a glossy magazine with a small and independent editorial team of volunteers, limited writers and photography, a layout and writing quality that’s evolving. But here one also sees a religious American Jewish community that is aspiring to a certain level of self-sufficiency, with rapidly climbing living standards: one sees it in the upsurge of gourmet kosher dining, high-end fashion boutiques and blogs, luxury kosher travel options. Living standards keep rising, and people are searching for a way to enjoy them while remaining within the observant community. That includes quality women’s magazines, as religious women increasingly show an interest in fashion as an art, a form of expression. The demand alone is the sign of a healthy market.

Hadar’s spring issue features seasonal trends, home décor ideas, a whimsical fashion spread, a feature on religious women entrepreneurs, a story on the Jerusalem film-making industry and a piece on Dapple Baby, an award-winning line of all-natural, eco-friendly cleaning products created by Orthodox women. “Here, you won’t see a story about a celebrity. We feature the hard-working, accomplished woman, we want to celebrate her achievements,” Genuth says.

Produced by a team of Orthodox women of various ages and levels of observance, Hadar constantly faces delicate, if not awkward, censorship issues. Advertisements are screened for modesty, but unlike other Orthodox women’s publications does have photographs of female models. “We have our limits with these things,” Weizman says firmly. “A store that agrees to sell our magazine, but tells us to cover the cover for the newsstand because there is a drawing of a woman on it and it wouldn’t be modest if a man sees it – we won’t sell there. That’s our limit. But we get subscriptions from all over regardless, from Lakewood, New Jersey to California, Brooklyn to Texas to Israel.”

Just as our Purim baskets have long ago disappeared, just as our kitchens turn to a frenetic Passover juggling of sponges and aluminum foil and bunches of parsley, as housewives and career women alike begin to wring their hands and count down the days until the Seder – on their smartphone calendars, no less – be on the lookout for these magazines gracing coffee tables and late Friday night sofa-lounging.

Hadar Offers Orthodox Women a Glossy Magazine of Their Own