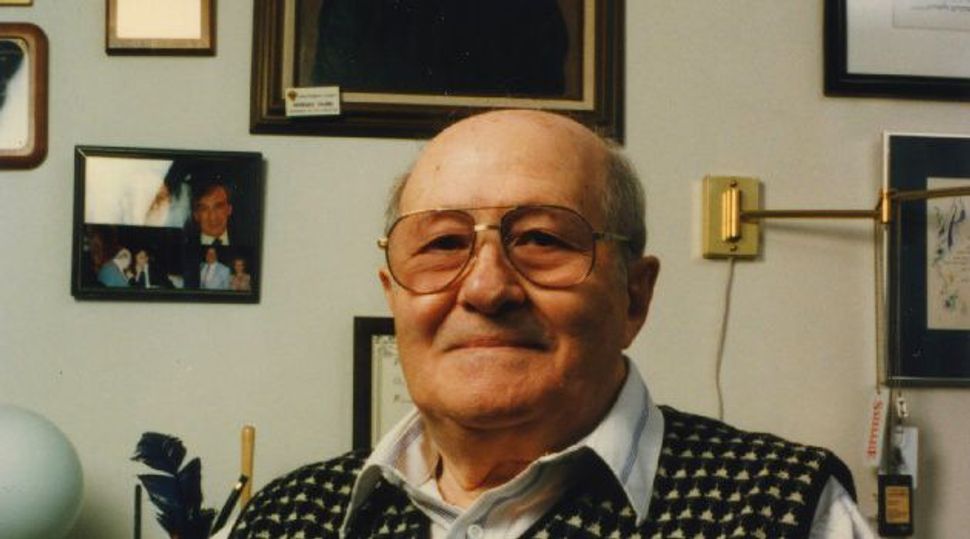 Veteran Journalist: Herman Taube served as the Washington and Baltimore correspondent for the Forverts for more than 60 years. Image by Courtesy of Lloyd Wolf

Herman Taube, a novelist, poet and longtime Washington correspondent for the Forverts, died March 25 in Rockville, Maryland. He was 96.

Born on February 2, 1918, in Lodz, Poland, Taube was orphaned at a young age and was raised by his grandparents, Mirle and Gershon Mandel. In an interview with the United States Holocaust Memorial Museum he described how he began writing poetry for his school newsletter, and at age 15 his work was published by the Yiddish poet Moshe Broderzon, who lived on the same street as his grandfather.

Taube studied nursing and became a medic in the Polish Army shortly before the outbreak of the Second World War. After retreating from invading German forces, he was captured by the Soviet Army and sent to Sibera. He was released in June, 1941, following the German invation of the Soviet Union, and worked as medic with the Second Polish Army in Uzbekistan. In 1944 he was wounded when his ambulence drove over a land mine during the Kursk offensive, and following his recovery he worked at the Majdanek hospital, treating former prisoners of the recently liberated Majdanek concentration camp.

After the war Taube married Susan Struass, a Holocaust survivor from Vacha, Germany, who had survived the Riga ghetto and Kaiserwald concentration camp. The couple emigrated to the United States in 1947, settling first in Baltimore and eventually in Washington, D.C.

Taube began writing for the Forverts almost as soon as he arrived, after being interviewed for the paper by another writer, Isaac Metzker. He continued to serve as the newspaper’s Washington and Baltimore correspondent for nearly 60 years, covering everything from the White House to the founding of the United States Holocaust Memorial Museum.

In addition to journalism, Taube earned a master’s degree in literature and creative writing from American University, and wrote more than 20 books of fiction and poetry, including the forthcoming “Uzbekistan Stories: A Jewish Medic During World War II.” His work often depicted his wartime experiences and life as an immigrant to the United States.

In an introduction to Taube’s 1986 collection, “Between the Shadows,” Eli Wiesel wrote: “From Shabbat songs of decades past, he takes us to the lamentations of the present day anguish of a generation wanting to forget. Taube narrates his impressions vividly, his encounters with friends, children, unknown passersby. And does it with both sensitivity and great perception.”

In addition to his literary activity Taub also worked for the UJA-Federation of Greater Washington, whom he represented on missions to Israel and Romania. He also served on the Holocaust Survivors Advisory Committee for the Jewish Social Services Agency of Maryland, Washington, D.C. and Northern Virginia, which established a $10,000 fund in honor of his 95th birthday to help support Holocaust surivors.

In his eulogy for Taube, Rabbi Stuart Weinblatt of Congregation B’nei Tzedek in Potomac, MD., said: “Herman was a witness to a vanished world; a window to a world that was vanquished and is no more. With anger, but not malice, his writings took us back and recreated and brought to life those whose lives were taken so cruelly, and the way of life that was destroyed.”