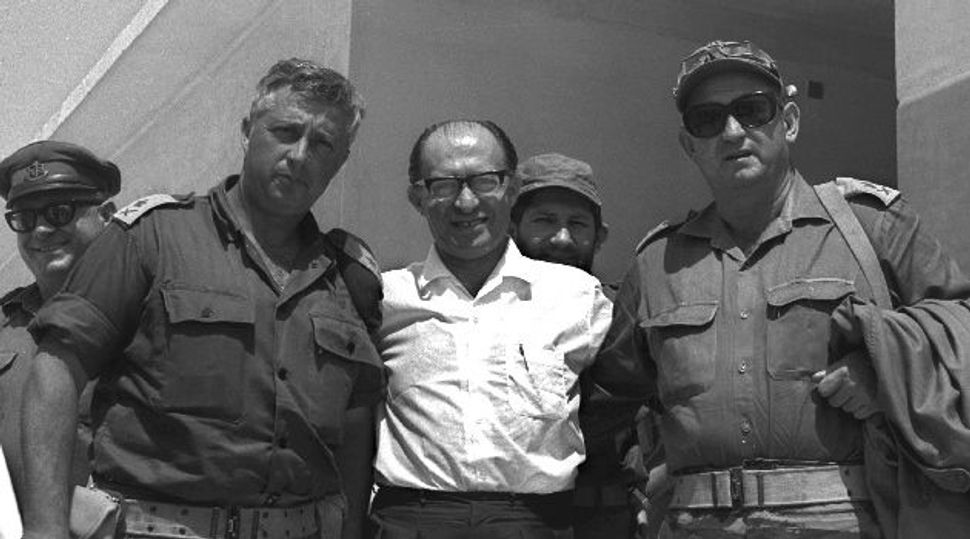 When Shall We Three Meet Again? Menachem Begin is flanked by future Prime Minister Ariel Sharon and General Avraham Yoffe in 1969. Image by Getty Images

Menachem Begin was one of the more complex personalities in Zionist history. Certainly, he was among the most controversial, and his story has been oft-told. Amos Perlmutter’s 1987 “The Life and Times of Menachem Begin” was conceived as a political biography, and offers a highly critical assessment of Begin as political leader. Ned Temko’s 1987 “To Win or To Die: A Personal Portrait of Menachem Begin” was intended to be a personal biography of the man rather than a critique of his ideas, and and depicts Begin in a more positive light than does Perlmutter. Relatively unbiased but woefully lacking in detail was Eric Silver’s 1984 “Begin: The Haunted Prophet.” Journalist Avi Shilon’s recent “Menachem Begin: A Life,” unveils Begin the man as much as Begin the warrior and politician, but does little in the way of elucidating Begin’s influence on contemporary Israel.

And lest we forget, Menachem Begin himself wrote two memoirs: “Ha-Mered,” “The Revolt,” a chronicle of his years leading Etzel, the Irgun Tzva’i Le’umi (the military arm of the Zionists-Revisionists in Palestine), and one of the few “insider” books on the Jewish revolt against the British in Palestine; and “White Nights,” the narrative of his experiences as a Zionist in the Russian prison system.

Israel’s sixth prime minister, Begin, came to power in 1977 in nothing less than a political revolution that unseated the socialist labor party Mapai, regnant in Palestine and Israel for decades. Begin, who died in 1992, is well-positioned in the pantheon of legendary Zionists who shaped Israel’s destiny and, by extension, Jewish history.

But he was a Revisionist Zionist ideologue who fought British rule with what we would call today the tools of terror, who fought Arabs with the determination of someone who came out of the Holocaust, and who fought Labor Zionist rule with defiance and rhetorical resistance. He was the quintessential outsider who became the insider.

Gordis’s book is clearly slanted toward Begin without being an insipid hagiography. He deftly recounts Begin’s youth in Poland; his rise to the top of Betar, the youth movement affiliated with the right-wing Zionist-Revisionist movement founded by the great Zionist leader Vladimir (Ze’ev) Jabotinsky as a counter to Labor Zionism; his arrival in Palestine in 1942 following imprisonment in a Soviet camp and the death of his family in the Holocaust; his years in the Yishuv (the Jewish community of pre-State Palestine) as commander of Etzel; his two decades of vocal opposition to Labor Zionist leader David Ben-Gurion (Begin was among the very few who had the courage to take on Ben-Gurion in parliamentary debate); his 1977 electoral triumph; and the Lebanon War and its aftermath, during which Begin left office in deep depression.

But what is the embattled “soul of Israel” in this book’s title? This “soul,” Gordis tells the reader, is reflected in a number of ways in Begin’s persona. For one thing, Begin’s love and respect for Jewish tradition were paramount. The fact that the Holocaust never ended for Begin, who had profound roots in destroyed Europe, informed much of what he said and did, as well as his relationships with Arab countries and leaders. Said Begin, “If they are enemies, they are Nazis, out to kill us.” Additionally, it ought be immediately apparent that Begin, in his struggles with Ben-Gurion over Wiedergutmachung, or “making good again,” the reparations agreements with Germany, would take the hardest of hard lines. Begin’s approach did not come out of nowhere; it was born of his deep concern for the “soul of Israel.”

Thus the embattled “soul” of Israel — the Zionist-Revisionist principle of Hadar or “dignity” — takes front and center in Gordis’s skillful retelling of Begin’s life. A most compelling chapter discusses the Altalena affair, a violent confrontation in June 1948 between the newly-created Israel Defense Forces and remnants of Etzel, over an Irgun cargo ship loaded with weapons. The new government of Israel, led by Ben-Gurion, attacked and sunk the Altalena, and thereby asserted Ben-Gurion’s hegemony over any breakaway or dissident military force. In Gordis’s comprehensive retelling of the story, the issue went beyond the political. Begin, at odds with Ben-Gurion, understood that not only was the viability of Israel at stake but also that civil war would destroy Israel’s soul. He backed down, and Israel was the better for it.

While “Menachem Begin: The Battle for Israel’s Soul” is thoughtful, it does not break new historical ground. And Gordis might have been a tad more careful with his facts and analysis. Begin’s book “The Revolt” was published in 1950, not in 1953 as Gordis has it. But errors of fact, and there are several, are minor points. Important, however, is the question of ideology, which is curiously absent in a book focused on the ideological struggles between Zionist left and right. Gordis does discuss the varied defense forces in the Yishuv, but his narrative is not well served by his historical analysis. The Palmach, the military striking-force of the Yishuv, was not a function of the Haganah, as conventional wisdom has it. Rather, it was the product of deep ideological struggles within the Yishuv between the socialist Mapai party, which generated the Haganah, and the more radical leftist Achdut Ha’avodah and Hashomer Hatzair kibbutzim, from which emerged the Plugot Machatz, the “Striking Forces” of the Yishuv — the Palmach. A sentence or two on the dynamics of the Palmach’s emergence would have been useful.

More important is the question, a core issue in any biography of Menachem Begin, of the more activist resistance groups in the Yishuv. One gets the sense from Gordis that Etzel and Lehi (Lohamei Herut Yisrael, also known as the “Stern Gang”) were identical in their Zionist-Revisionist ideologies, but that Lehi was the more radical. This idea obscures the deep ideological differences between the two groups. Lehi was more radical, but included fighters from all over the political and ideological map: groups of right-wing sectarian-religious Agudath Yisrael side by side with, counter-intuitively, a group from the far-left secular Marxist Hashomer Hatzair. These Lehi fighters were united by the common goal to get the British out of Palestine.

The goal of Begin’s Etzel was identical, but every Etzel member was a follower of Jabotinsky and Begin’s Revisionism, which Gordis fails to acknowledge.

This point is more than mere nuance; it tells us that the Jewish community in Palestine, derived from the Eastern European Jewish world, was all about ideology and “movement,” and that the institutions of the Yishuv — including the fighting forces — were informed by ideological struggle. It was not only right against left, Ben-Gurion’s Mapai versus Jabotinsky and Begin’s Zionist-Revisionist party.

How might we characterize Menachem Begin’s contribution to Israel? What was his legacy? It’s mixed. Begin did put his very Jewish stamp on the Jewish character of Israel. But many historians maintain that in the aftermath of his peace-making with Egypt, the settlement initiative was strengthened, and internal conflict in Israel increased dramatically. Begin’s legacy was not that of a leader who transformed from stiff-necked Revisionist warrior to Nobel Peace Prize recipient. With settlements, with the Lebanon War, with tepid responses to the economic crisis of the early 1980s — was the Revisionist Hadar-Zionist dignity compromised? Did Begin himself unwittingly trump Hadar?

Jerome Chanes, a Forward contributing editor, is the author of four books and numerous articles on Jewish public affairs, history, and sociology. He is a senior fellow at the Center for Jewish Studies of the CUNY Graduate Center.