What Does This Photo of Tashlikh Say About the Evolution of Jewish Life? 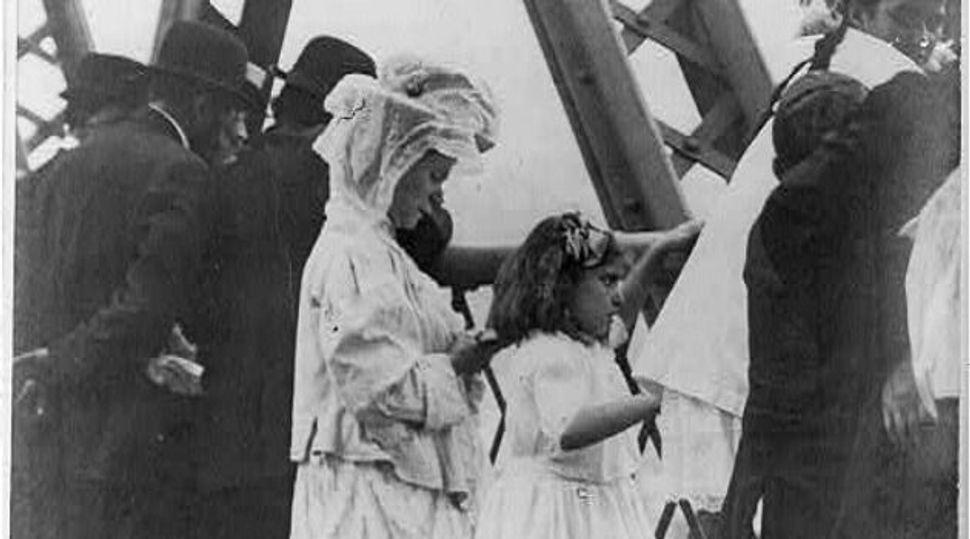 Who Is That Veiled Woman? This 1909 photo was taken by the Bain News Service, whose photographers had an eye for the curious and serendipitous. Image by Library of Congress

You have seen her before. She stands, swathed in white from tip to toe, on the walkway of a bridge, peering intently at the book she holds in her hands. She exudes a sense of solitariness, but she is not alone. A phalanx of men clad in black gather to her left. She is flanked on her right by two considerably younger women (her daughters, perhaps?), who are also dressed in white; one of them is perched precariously, tauntingly, on the railing.

At first blush, the composition, a photograph from 1909, puts me in mind of a spirited urban outing à la “Sunday in the Park with George.” But this is no frolic, not entirely. What the camera has caught is a group of New York Jews engaged in the ritual of tashlikh, the symbolic casting away of one’s sins, which, then as now, takes place on the first day of Rosh Hashanah.

The photograph currently resides at the Library of Congress. At the time it was first taken, the image belonged to the Bain News Service, whose cadre of roving photographers in the years prior to World War I had an eye for the curious and the serendipitous, as well as a nose for those moments when the disparate residents of the Empire City came together as a community. Its hefty portfolio of glass plate negatives abounded in scenes of parades and processions, Italian street festivals, Chinese New Year celebrations, and Jewish immigrants en route to synagogue for Rosh Hashanah services, or, in this case, casting away their sins from atop the Williamsburg Bridge.

What’s most striking about the latter image (one of a series, by the way) is its juxtaposition of the old and the new, situating an age-old minhag, or custom, against the marvels of engineering (the bridge) and the wonders of modern-day technology (the camera). The photograph speaks to the ways in which modernity did not sound the death knell of religious ritual so much as reposition it, a process that was at once a matter of geography and attitude. In its migration from shtetl to metropolis and its transformation from a practice derided by some as silly, superstitious and outmoded into a popular contemporary pursuit, tashlikh reflects the modern Jewish experience and the ongoing need for the gestures of community.

In my Manhattan neighborhood, which is flanked on one side by the Hudson River, tashlikh is a very big deal. As much a social occasion as a religious one, it draws large numbers of people of all ages and from across the religious spectrum. The ritual’s latter day appeal is not hard to understand: Its mayles, or attributes, are many. Accessible and participatory, tashlikh does not demand much of its practitioners. It emphasizes good intentions rather than liturgical proficiency. Volitional, occasional and, in its relationship to water, environmentally conscious, too, tashlikh’s attention to the self and its improvement is also very much in keeping with our current concerns. Above all, the public ritual of casting bread upon the waters contains just the right amount of whimsy and quirkiness to render it fun.

This year, the inclement weather seemed to have deterred many from going down to the river with the requisite baggie of bread bits in tow. Here and there, I espied small knots of people huddled together under an umbrella or congregating in one of the tunnels that spills out onto the waterfront promenade, but nothing came close to the legions of people that have, in years past, turned out for tashlikh. Keenly disappointed, I returned home, wondering along the way whether, as if a character out of an O. Henry story, I might have been a shade too early or a shade too late.

Still, I am comforted by the knowledge that even in 5775, I will always have the woman in white from 5670 to keep me company and remind me of the value of tradition.

Editor’s note: Due to an editing error, an incorrect photo accompanied an earlier version of this story.

What Does This Photo of Tashlikh Say About the Evolution of Jewish Life?