Jo Milgrom’s Torah Mantles Are Definitely Art. But Are They Kosher? 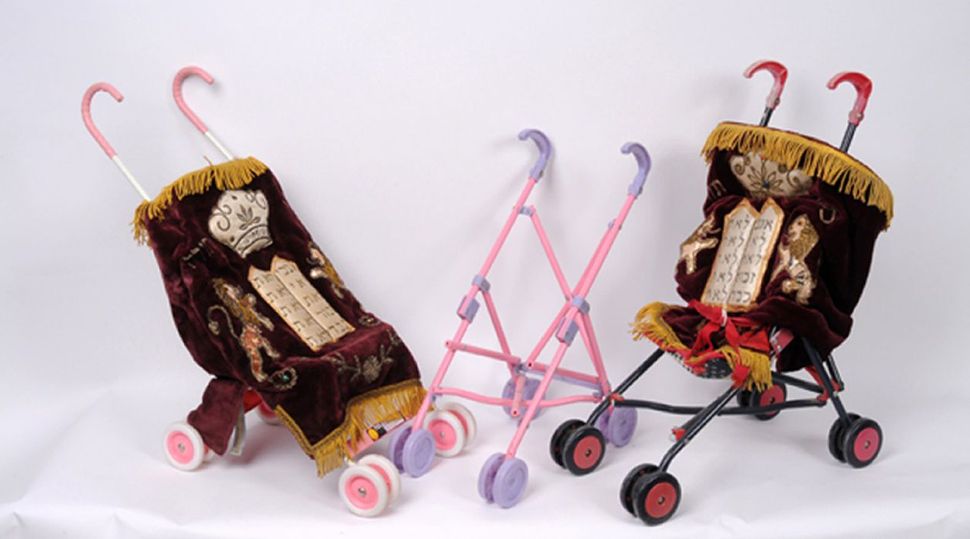 Turn of Events: Jo Milgrom’s ‘One Has Not Yet Asked’ is on display as part of her latest exhibit, ‘Turn it Over, Overturn It.’ Image by Jo Milgrom

Among some of her fans, Jo Milgrom is known as “the archeologist.” She rescues precious artifacts from the obscurity of Jerusalem’s dumpsters and secondhand shops, while also providing them a home and new levels of meaning, they say.

“When I see things on the street, they have their own realities,” the 86-year-old artist tells me in her home, over tea. “I take them home, I give them new life.”

Rebirth is a running motif in both Milgrom’s work and personal life. Milgrom, who resided for years in Berkeley, California, and now lives in Jerusalem, speaks with a youthful ardor about the endless possibilities for self-realization that Jewish life, and the study of Midrash particularly, are meant to provide. Like her late husband Rabbi Jacob Milgrom, whose groundbreaking work on the book of Leviticus established him as one of Israel’s leading Bible authorities, Jo Milgrom has garnered attention for her explorative interpretations of religious texts.

Milgrom’s home, which also functions as gallery and classroom, is packed with pieces forged from assorted “found objects” such as old bras, antique typewriters, military uniforms, and telephone wires, juxtaposed with Judaica The doors are adorned with mezuzot, many of which contain a personal passage instead of the customary parchment, which she notes is “considered rebellious.”

The mezuzah, she argues, is one of the most common yet least understood of Jewish symbols.

“If there was a consciousness of that sacred moment of passage, the vertical connection to God which is the axis mundi, people wouldn’t go through and not think about it,” she says.

Milgrom employs an experiential methodology in both her teaching and her art, which “connect[s] the head, heart and hand” and seeks “the deeper symbolism of rituals, so you don’t get stuck in the thing itself.”

The “thing itself” has become a source of contention in Milgrom’s latest exhibit, “Turn it Over, Overturn It,” which features recycled and re-contextualized Torah mantles — the velvet, Judaica-embroidered covers for the Torah.

The mantles arrived by way of Grand Rapids, Michigan, where Congregation Ahavas Israel announced that they were up for grabs to anyone willing to pay the price of postage.

“I was eager, but hesitant, and really a little scared to do face-lifting on those things, to put scissors to the mantles,” Milgrom told me. “But I was eager and felt a great responsibility to do something.”

If the “orphan” mantles had not been appropriated, they would have been buried, as is the tradition with ritual articles that serve the Torah or other Jewish ritual objects. Milgrom says that idea disturbed her even more than the idea of cutting them.

“The mantles were dead to their old life, but I could resurrect them and open their mouths, have them speak Midrash, which is eternally contemporary,” she said, describing how her creations intend to honor the mantles’ place in both the past and the present.

The show featuring the mantles was originally slated to open as a permanent exhibit and teaching gallery at the Schechter Institute of Jewish Studies, the prominent Conservative school in Israel, where Milgrom teaches a course on “visual midrash.”

But several months ago, after the invitations were printed and the show was set to open, the Institute’s president, Rabbi David Golinkin, vetoed the event, asserting that the pieces contradicted Jewish law. In a speech at the exhibit’s opening, he discussed the process of determining the legality of recycling ritual objects, concluding that the practice is only permitted when it elevates, rather than degrades, the objects’ original sanctity.

He joined two scholars from the Reform and Orthodox movements to debate the exhibit and its implications, at its temporary venue at the Hebrew Union College, Jerusalem’s leading Reform institution.

Ultimately, the mantles exhibit at the Schechter Institute was cancelled because “ritual objects must be buried or hidden away,” said Golinkin in a speech. “I decided that this exhibit was not elevating their holiness, but degrading it.”

While the show would have easily found a home in a liberal synagogue in her former city of Berkeley, Milgrom is still looking for a long-term arrangement in Israel. She tries to be optimistic, but is also aware that a significant number of viewers are uncomfortable with the work, or even equate it with sacrilege.

One mantle is wrapped in lace and yarn, symbolizing the maternally nourishing function of Torah. Another, “Troubled Icon,” features a mangled Star of David, and serves as a commentary on the “tortured” image of Judaism that Israel presents to the world — one of Milgrom’s most “difficult” but also central pieces, she says.

Netanel Bollag, a 26-year-old art student who attended the exhibit’s opening, found the latter piece jarring. “But, still,” he said, “the desire is that there will be a connection. That Judaism will be something that we can discuss, especially in Israel, where a very clear line between the religious and the non-religious worlds creates a kind of cultural repression.”

Non-Orthodox movements are still a minority in Israel and remain unrecognized by the Orthodox-dominated religious establishment. Many audience members at the opening, however, contended that even the more controversial pieces are in line with classic Jewish principles of critical reflection, and therein “elevate” the objects’ sanctity.

“These mantles serve educational purposes, provide a deeper understanding and new dimensions to issues related to sanctity, and that’s a wonderful thing,” said Orthodox Rabbi Daniel Sperber, who received the Israel Prize for his work in Jewish studies.

Engendering dialogue was, in many ways, the goal, says Milgrom. The role of both art and Midrash, she says, “is not supposed to be a comfort, necessarily, but to stimulate and challenge the identity of Jews in the 21st century.”

Shira Rubin is a journalist based in Jerusalem.

Jo Milgrom’s Torah Mantles Are Definitely Art. But Are They Kosher?