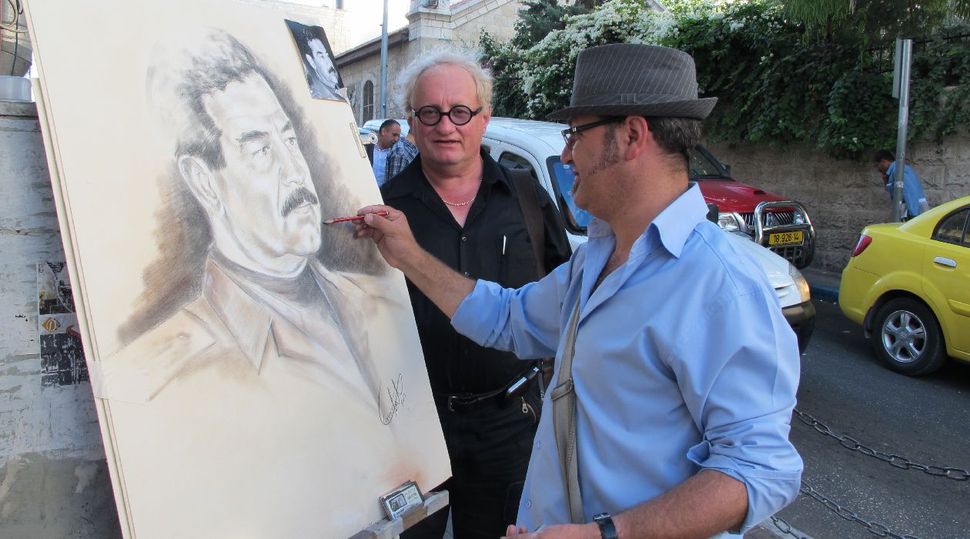 I’m in Tel Aviv. I love Tel Aviv. Who doesn’t? I’m in a boutique hotel on Gordon Street, facing the Gordon Beach, and I’m ready for breakfast.

“What would you like to order?” asks the waiter.

I like the waiters at this hotel. They are young and handsome, they look intellectual, and all of them seem to be post-Zionists. In short, they are very cool.

What do you recommend? I ask the waiter.

“What is Israeli breakfast?” I ask, as if I have never been to this part of the world before.

I never knew that bacon is an Israeli staple, but I guess I don’t know everything.

Like many of Tel Aviv’s youth, this waiter seems to think that Israel is an occupying power and that the Palestinians are great, warm and kind. He opposed Israel holding onto any piece of land it captured in 1967, and to him Jerusalem is somewhere near Mecca — two places very far away that he would rather not visit. For the life of him, he can’t grasp the logic of any Israeli who would want to live in Jerusalem when he or she could have good bacon by the sea. To him, Israel starts somewhere near Gordon Beach and ends somewhere after Jaffa.

Just a few kilometers away from us lies the ultra-Orthodox city of Bnei Brak, the city I was born in, and a place many a Tel Avivian would love to be annexed by Poland, Lithuania, Egypt or Libya. The people of Bnei Brak don’t see eye to eye with anyone from Tel Aviv. For them, not only is Jerusalem quite close, but heaven is also just steps away.

“How can I help you?” a man at the entrance asks me.

“Aryeh Deri,” I say, referring to the leader of Shas

“You are a friend of Rabbi Aryeh?”

“Best friend! I was at the wedding of his daughter. Were you there?”

I have no clue what I’m talking about, but it’s worth a try.

“What an honor to have you with us!” the man says. “Did you vote for him already?”

“Here, take this.” He gives me a card. On one side of the card there is a quote by the deceased rabbi of Shas, Ovadia Yosef: “He who votes Shas will go straight to Paradise.” On the other side of it is a big golden key, the key to paradise.

Although the key might make some people vote for Shas, I think that they are total fools. What the card actually says, quite clearly, is that I’ll drop dead the moment I vote for Shas, but I don’t want to die so fast. Yes, paradise must be great, but I prefer my Israeli breakfast and I’m almost sure they don’t serve bacon in heaven.

Another city close to heaven, as religious people say, is Jerusalem. Jerusalem, I find out while I’m there, is Bibi’s city.

There I met many people, such as a man named Rami.

Rami supports the Likud, Bibi’s party, he told me.

“If the Likud puts a dog as a PM, I would vote for it. I can’t vote anything but Likud. If I even try to vote for any other party, my hands will tremble and shake. Likud! Until the day I die!”

“History! Menachem Begin put us, Sephardic Jews, on the map. He treated us like humans. The Labor Party, and all the Socialists and liberals, say big words about caring for the poor and the disadvantaged, but what they really think is that we are animals!”

Big words. But the mood in Jerusalem seemed bleak, and every poll predicted a huge loss for Bibi. Tel Aviv, on the other hand, seems very cheerful.

The weather is excellent and I go for a walk, to meet and chat with people. Ben and Julia, two Jews who work hard to get other Jews to vote for the Joint Arab List, are my favorite today. “When I was a child,” Ben tells me, “I rooted for [the Israeli left party] Meretz, but now that I’m a grown-up I know better.”

You wouldn’t know that Ben and Julia are Joint Arab List activists. On a fence behind them there are big posters for the Likud, and I guess this was the best way for them to confuse their enemies. But if this was indeed their intention, they turned out to be the smallest confusion makers in the land. The biggest confusers, and confused, are the election survey takers. They have published survey after survey, and they got them all wrong. The country, against their best predictions, votes Bibi.

I have never seen Tel Aviv so sad.

But life moves on and soon enough, Election Day is but a memory.

After some days pass, I meet Shimon, a peace-loving man, and I ask him to clear up for me some of the confusion.

“I wanted to vote for Buji [Herzog],” he says. “Buji is for peace and I said to myself that with him the chances for peace would be higher. But then I heard Bibi talking about Arabs who were bussed in droves to vote for the Arab List and I woke up.”

“You fell for his racist fear-mongering?”

He cuts me off. “Can I tell you something?” he asks. “I have a neighbor, an Arab neighbor, and I like him very much. I like him and I like his wife. Really nice couple. They were married for quite a few years, but they did not have children. I felt very bad for them. One day I said to the husband, ‘Listen: I’m going to drive north and pray at the grave of a very holy rabbi. Tradition says that if a man prays there, he will have children. I will go there for you and I’ll pray that you have children.’ I drove north, for hours I drove, and I prayed at the rabbi’s grave for him. One year later — do you hear me? — exactly one year later the couple had a child! That child, who was born by my prayer, won’t be fighting Jews and won’t hate Jews. That’s one Arab, I’m sure, almost sure, who will not point a gun at Jews. You understand me?

“When Bibi talked about Arabs going to vote in droves, it made me think. The Arab MKs of the Joint Arab List want the Jews out of this country. I heard them say it and I know their way of thinking. I’m an Arab like them, an Arab Jew, and I understand what they say. Why would the Arab citizens of Israel vote for them? I didn’t think of it before. I want peace. I hope, I hope, I hope that the child I helped to be born will not kill me when he’s a grown up. I don’t like Bibi but I voted for him.

“I like the Arabs, I love them, only that peace is a dream. My dream, my foolish dream. You are not from here, are you? Your Hebrew is good, where did you learn it? If you lived here, if this was about your life, you would understand me. I want peace more than any Buji and any Obama. The Arab world lays in ruin, Muslim killing Muslim. And it didn’t start today; it’s going on for centuries. This place is the Middle East, this place is not America. By the way: How are the blacks and whites doing in America?”

I go back to Gordon Street. I stare at the void, drink some Chivas Regal, and try to forget everything.

They don’t have these here.

Wake up from your dreams, handsome waiters: This is not Copenhagen, here it’s Tel Aviv. Right next to Bnei Brak. Right below paradise.

Wait! Look out, there on the road, if you dare take a look: Shimon is driving, on his way to make peace at a grave.

I wonder if I should give him my paradise key.