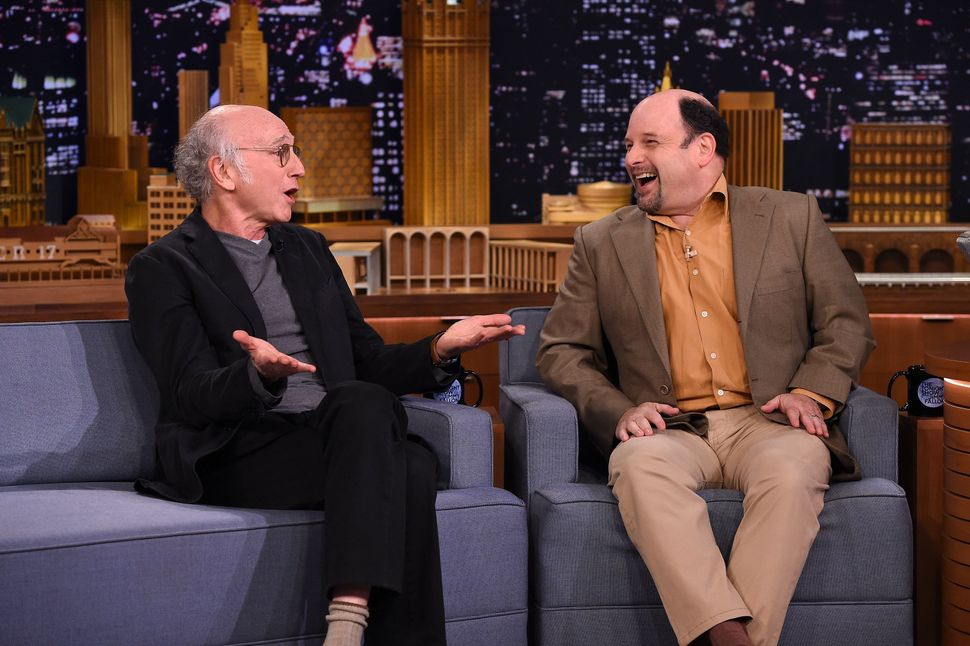 Jason Alexander is the star of stage, screen and Festivus. Of late, too, he has been a major trending topic on the Internet, all because of some poisoned envelopes.

Alexander played George Costanza for nine seasons on Seinfeld. In season seven, he was engaged to Susan (Heidi Swedberg), who sadly met the grim reaper while licking toxic wedding envelopes. Since then there have been persistent rumors that Susan kicked the proverbial bucket because no one liked working with the actress who portrayed her.

Recently, while out promoting his new gig, replacing Larry David in David’s “A Fish in the Dark” on Broadway, Alexander was asked about the Susan. Despite the fact that he made it clear that there was no personal animus, the Internet lit up with just the opposite story.

Just clear matters up (and also to get in on the action), The Forward asked Alexander about his comments, about being George Costanza for life, and about his many trips to Israel.

Curt Schleier: I assume you are aware that you’re a hot trend.

Jason Alexander: Apparently things that shouldn’t be controversial are controversial. What I was trying to talk about was a subtle actor thing, and it was interpreted as my dishing on the actress. I couldn’t figure out how to play George opposite the way Heidi was playing Susan. Until this day I can’t answer how I was supposed to play him. Clearly that [tension] was what Jerry and Larry wanted, but I was lost. That was character to character, but as a result [of what I tried to explain] the actress got hit in the head. I went on Twitter and tried to explain that, but beyond that I don’t know what to say.

My wife and I saw your appearance last summer with the Boston Pops and enjoyed it very much.

And that wasn’t a press deal either. We paid cash money for the tickets.

[Laughs] Thank you very much.

So I feel you owe me. Can you tell me something that will trend? Maybe Larry and Jerry were impossible to work with?

Great. Thank you. But let’s move on to your new job. Did you ever think that replacing Larry in “A Fish in the Dark,” a Larry David play, could be disappointing to his rabid fan base?

That’s interesting. With a nod for what you’re saying, I saw it the other way around. Larry has created something that’s relatively bullet proof. It has a brilliant cast in a solid, solid play that audiences seem to love. This is not a new opening night. It’s the same run, except Larry is leaving. I saw this as a great opportunity to come back to New York to do theater, which is something I was actively looking to do. I have a lot of experience singing Larry’s music [i.e. performing his “Seinfeld” scripts], so these are comfortable shoes for me. It’s been a happy experience. The cast has been great. Larry was crazy to leave. I think he’s having the time of his life. But I’m happy to step in for the rest of the run.

You mention returning to New York theater. Many people don’t know you’ve made many appearances on Broadway, including Neil Simon’s “Broadway Bound” and Jerome Robbins’s “Broadway,” for which you won a Tony. Does it bother you that you are George Costanza for life?

Nothing about any of that frustrates me. Careers are what they are. Who are we kidding? I had a long career before “Seinfeld” and I’ve had a long career after, but the day I die the obituary will say, “George Costanza died today.” I played him for nine years. The show became special around the world and hasn’t lost popularity. So I know that’s going to happen [identity tied to that character] but it doesn’t frustrate me.

A good thing, it seems, is that you do a lot of different things. Do you have a favorite?

There is a joy in being able to mix it up. They all have pros and they all have cons. The pros of live theater are plentiful and profound for me. I love the challenge of walking the tightrope, the curtain going up and creating the illusion for the audience. Everyone has to be on top of their game, because if anyone drops the ball it doesn’t work. The down side is you have to do eight shows a week. Your whole life gets altered, as does the way you have to treat your body and your voice. It’s a grueling schedule, and once you open a play you’re committed to playing the same part eight times a week for a long time. On TV, the material is different but, if the show’s a hit, you’re committed to playing the same character year after year after year. I don’t have a clear preference, but I would certainly be unhappy if I couldn’t keep live performances in the mix. Also, I’ve been moving more and more into directing. I find that more fulfilling than just performing.

Can you talk a little about your Jewish life growing up?

I would say my family was Reform. We kept kosher for many years, but a lot of that was out of respect for my grandparents. My parents were brought up more orthodox than we were, but were not as observant as their parents were. I am a very proud Jewish guy. My sense of humor, my personality when I’m just being me, everything says here is a Jewish guy. I am not religiously motivated, but I don’t gravitate towards religion in general. I’ve been largely unobservant for most of my life, basically from my bar mitzvah on. Having said that, I have two sons and both of them have been bar mitzvahed, and happily so. They found it to be a very positive experience. Although they are also non-observant they are good Jewish folks.

Broadway producer Manny Azenberg told me you were on one of the show business trips to Israel he organized under the auspices of the Anti-Defamation League.

My first engagement in Israel was on one of those trips where we were exposed to all levels of Israeli society. I found that trip to be life changing for me. I loved that trip and I fell in love with Israel and Israelis. As a result, I got involved in the organization One Voice, with both Palestinians and Israelis working for a two-state solution. I’ve gone to Israel several times. Not to pontificate, but to attract media attention.