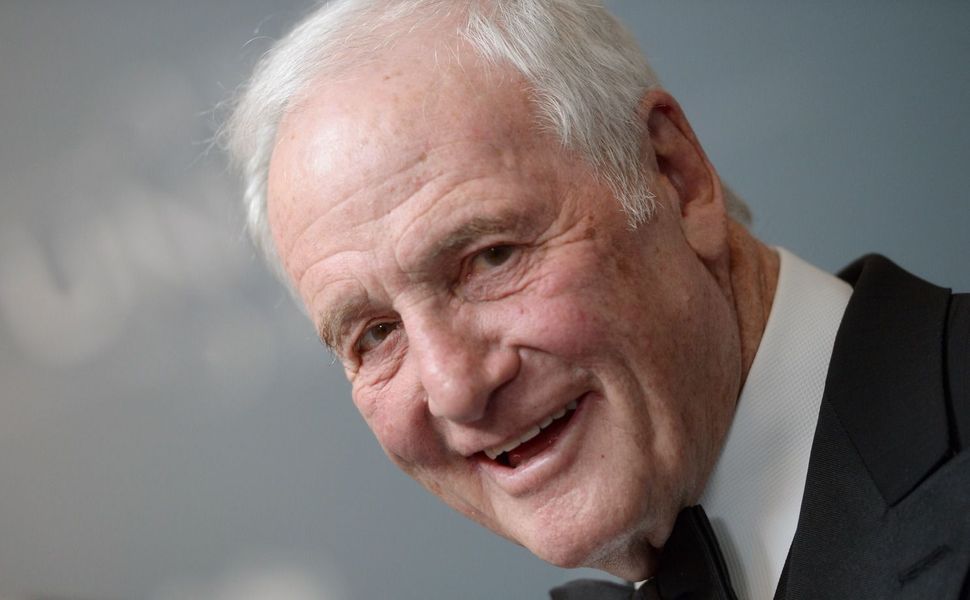 Jerry Weintraub, the colorful and controversial producer whose films included “Nashville,” “Diner,” “The Karate Kid” and the trio of “Ocean’s Eleven” films, died Monday of cardiac arrest in Santa Barbara, Calif. He was 77. He had been in poor health recently.

When he received Variety’s Creative Leadership Award in 2013, Weintraub told Variety that he had a yacht and a Rolls-Royce, but was “not a big Hollywood guy.” Some would disagree. He was actually an old-school Hollywood showman, who understood the relationship between production and marketing. He was also a snappy dresser — his shoes were colorful and fun — who knew how to work the room and how to work the press: He was always available to the media and when he had a film in release, he knew how to maximize public awareness.

But the showiness was backed by hard work. His savvy came after decades of performing in many different jobs in the industry.

Jerome Charles Weintraub was born in Brooklyn and raised in the Bronx. As a teenager he enlisted in the Air Force, where he served as a radio operator. He worked in the mailroom of MCA, he quickly was promoted to assistant agent and then agent in the 1950s and ’60s. By the early ’70s he had built a large business, Concerts West, co-owned with Tom Hulett and which booked talent as diverse as Frank Sinatra, Bob Dylan, Elvis Presley and the Beach Boys. His Management III handled John Denver, Neil Diamond and Dolly Parton among others. Weintraub was an innovative music-business showman — he was among the first to book top talent into concert tours held in sports stadiums — and he became rich for his efforts. He also packaged television specials featuring Denver (whose 1974 “Rocky Mountain Christmas” special won an Emmy), Diamond, Sinatra, the Carpenters and Pat Boone.

He expanded into films, as exec producer on the Robert Altman-directed “Nashville” in 1975. In 1977, he enjoyed one of his biggest commercial hits, “Oh, God!,” starring Denver and George Burns. Other films included “All Night Long,” “9/30/55” and “Happy New Year.” He was producer of the 1980 William Friedkin-directed “Cruising” (which gained a lot of publicity from the protests of gay activists) and the 1982 Barry Levinson film “Diner.”

But it was the sleeper 1984 hit “The Karate Kid” that helped convince Kirk Kerkorian, then owner of MGM/UA, to hire Weintraub to revive the moribund United Artists unit. Weintraub also bought a minority stake of UA in 1986, but found himself on a collision course with the equally strong-willed Kerkorian. Several months later he was out of a job and vowed not to work as an employee ever again.

In 1987, with $461 million in backing raised through various public and private sources, he launched Weintraub Entertainment Group in an attempt to create a rival to the major Hollywood studios. This venture, in which Weintraub controlled 76% of the stock, produced such unmemorable films as “My Stepmother Is an Alien,” “The Big Blue,” “Troop Beverly Hills” and “She’s Out of Control.” The company was out of control too, quickly losing top executives and the confidence of financial institutions. Weintraub tried to safeguard the company by purchasing the foundering Cannon Group’s 2,000-title movie and TV library for $89 million and some stock in WEG (the library had once been the Thorn-EMI library). It proved to be a wise investment, but not enough to save the company from bankruptcy three years later — and shareholder antipathy soon thereafter.

He produced more “Karate Kid” titles with decreasing degrees of popularity, offering a variation with the 1994 “The Next Karate Kid” starring a girl (a then-unknown Hilary Swank). Meanwhile, Weintraub jumped over to Warner Bros. He returned to his interest in the music industry with the 1992 “Pure Country,” a failed attempt to put country star George Strait on the movie map; the Sylvester Stallone action vehicle “The Specialist”; and “Vegas Vacation,” in which he also appeared.

After a very bad year in 1998, which saw the disastrous film adaptation of the 1960s TV series “The Avengers” and the little-noticed Kurt Russell sci-fi vehicle “Soldier,” Weintraub exec produced the 2000 comedy “The Independent,” an amusing indie film starring Jerry Stiller as a documentary filmmaker that also featured cameos by a variety of Hollywood directors as themselves.

Weintraub surged back into successful, high-profile filmmaking with the 2001 remake of “Ocean’s Eleven” (the original had been a vehicle for Sinatra and his fellow Rat Packers). Weintraub professed to not having been impressed with the 1961 film, but he held onto the rights for years — and assembled a package that personified Hollywood glamour and escapism, thanks to director Steven Soderbergh and an extraordinary cast topped by George Clooney, Brad Pitt, Matt Damon and Julia Roberts. The witty, stylish film grossed $451 million worldwide.

The notably sloppy 2004 sequel “Ocean’s Twelve” — everyone appeared to be having so much fun onscreen that they didn’t really bother with a script — made $362 million worldwide, and third entry “Ocean’s Thirteen” (2007), which returned to the tighter approach of the first film, took $311 million. Weintraub made appearances in all three films (as well as in Clooney’s “Confession of a Dangerous Mind” and Soderbergh’s “Full Frontal”).

“Nancy Drew,” an adaptation of the beloved children’s mystery series that was directed by Andrew Fleming and starred Emma Roberts, did not, however, find much success in 2007.

He had another significant hit with a reinvention of “The Karate Kid,” in a 2010 version starring Jaden Smith.

Weintraub produced Steven Soderbergh’s acclaimed Liberace biodrama “Behind the Candelabra,” starring Michael Douglas and Matt Damon. It aired on HBO in 2013 and was an enormous success come Emmy time.

However, a few years later, he admitted that there was one step in the process that he didn’t enjoy. “Being an agent is an impossible job. You spend your day with a phone list of people you don’t want to call back,” he told Variety in 2013.

He added that his brash style didn’t always sit well with contemporaries. “I enjoyed my mentors a lot more than my peers because my peers all thought I was crazy. I heard the same mantra from them over and over: ‘You can’t do that! It’s no good!’ But I knew I could do it, and I knew I was right. The truth is, they were afraid of me and afraid of the risks I was taking. But people who’d been through it and were successful were not afraid of me.”

Weintraub also exec produced a documentary, “41,” on his friend George H.W. Bush that aired on HBO in June 2012. He also was producer, with James Cameron and Arnold Schwarzenegger, of Showtime docu series “Years of Living Dangerously,” which aired in April 2014 and featured a host of celebrities, including Schwarzenegger and Harrison Ford, warning about the dangers of climate change.

The producer shepherded the current HBO limited series “The Brink,” starring Jack Black and Tim Robbins, which takes a darkly comic approach to a geopolitical crisis, and premiered in June, as well as a limited series adaptation of the 1970s hit fantasy adventure film “Westworld” starring Ed Harris and Anthony Hopkins. He also has a “Tarzan” feature, starring Alexander Skarsgard, Samuel L. Jackson and Christoph Waltz, set for release in 2016 and a variety of other projects in development.

Douglas McGrath’s 2011 HBO documentary “His Way,” produced by Soderbergh and Graydon Carter, among others, took a look at Weintraub’s professional and personal life; interviewees included George H.W. and Barbara Bush, Clooney, Pitt, Roberts and Bruce Willis. In March 1991, President Bush appointed Weintraub to the board of the John F. Kennedy Center for the Performing Arts.

He received the Kodak Award at 2001’s ShowEast confab for a lifetime in film, and in 2002 he was honored in France with the Deauville Festival of American Film’s Coup de Chapeau trophy for lifetime achievement in film. The festival unspooled a retrospective of his work. He also received Hollywood publicists’ Motion Picture Showmanship Award in 2002. The Zurich Film Festival paid tribute to Weintraub with its Golden Eye career achievement award in 2012.-Reuters

He was a substantial contributor to arts organizations including the Los Angeles County Museum of Art, the Museum of Contemporary Art and the Music Center, as well as to charities including Chabad, whose “L’Chaim: To Life” telethon he exec produced in 2005. With his wife, Jane, he founded the Jane & Jerry Weintraub Center for Reconstructive Bio-Technology at UCLA.

Weintraub’s memoir, “When I Stop Talking, You’ll Know I’m Dead: Useful Stories from a Persuasive Man,” was published in 2010.

Weintraub married former singer Jane Morgan in 1964, but while they never divorced, he lived with girlfriend Susan Ekins for two decades. In addition to Ekins, he is survived by four children by Morgan: Michael, Julie and Jamie, all of whom assisted their father on films, Jody, a TV producer; his brother Melvyn and five grandchildren.