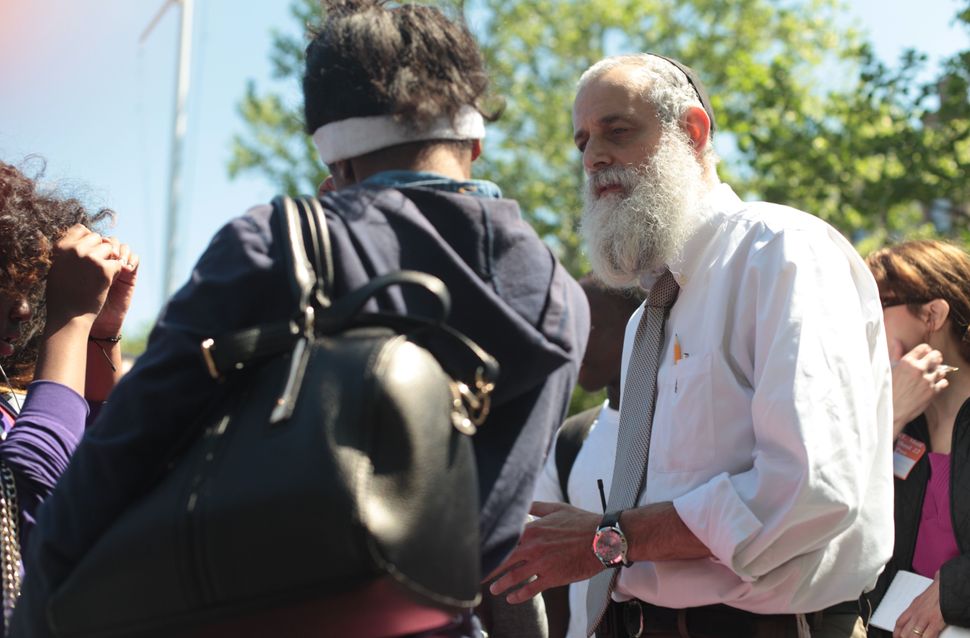 It’s noontime at Jordan L. Mott Middle School in the South Bronx, and in the playground the tempers are flaring. A seventh-grade girl has discovered that a classmate had posted something about her on Facebook. The expletives are flying, and friends are taking sides. As the crowd grows, the tension thickens.

Enter Tuvia Tatik, dean of the seventh grade. He is dressed in a crisp white shirt, along with khakis and with tzitzit that sway as he walks. He listens carefully to both girls before speaking. “Is it worth fighting over?” he asks softly of the tall 13-year-old girl, who sullenly folds her arms over her bright-pink shirt and holds her oversized purse in her hands. Then he turns his attention to the other girl, whose thick black hair is pulled back with a white hair band: “I know you’re mad. But is this worth fighting over?” He invites both girls to his office, where they can talk it out. “Is that good by you?” he asks each girl, who nods in turn. “If you beat her up, it’s not going to make it better,” he reminds each of them, as such an act could bring suspension and a phone call to parents.

His role as dean is to handle behavior and disciplinary issues in the seventh grade. “I’m not a policeman,” Tatik said, asserting that he doles out discipline rather than strict punishment. “I’m here to help them become good citizens and train them for a good life.”

Enforcing the rules does not dampen his popularity. As he monitors the hallways and lunchroom for trouble, teens shake his hand and high-five him, “Yo, Tatik.” He grins back, slapping their shoulders. “Hey, this is my favorite student,” he says of each and every one. Some kids want to gab with him about sports, others about their problems. “He can get on your nerves and stuff, but he’s trying to push us to do good,” said 13-year-old Raven, who sided with her friend in the brawl. “He breaks up fights all the time. And he explains math when we don’t understand what the teacher is saying.”

Tatik stands out in the three-story, red brick middle school in the South Bronx, which is dominated by students of color from the surrounding neighborhood. The bearded, yarmulke-clad psychologist is a father of six from Brooklyn’s Crown Heights.

For the past nine years that Tatik has worked at the school, his day has begun at 5 a.m. with a bicycle ride to the mikveh, followed by morning prayers at a synagogue and then a rumbling 80-minute subway ride in which he thumbs his way through the Book of Psalms. He shrugs his shoulders at the arduous grind. “You get used to it,” he said, explaining that he peruses the Torah, and occasionally naps on his way home.

For Chabad Hasidim like Tatik, there are no religious restrictions that prevent them from working in the public school system — even though they typically don’t send their own children there.

“They get degrees in education or psychology, and it turns into a good job for them,” said Alan Brill, a professor of Jewish-Christian studies at Seton Hall University. There are no statistics on how many Chabad Hasidim work in the public school system, but Brill estimated there are a few dozen.

Tatik never envisioned his current career. He grew up in a Conservative household in the Bronx, and attended public school. (His cousins even went to Jordan L. Mott.) His Jewish education consisted of once-a-week Hebrew school attendance in the afternoon. At age 27 he encountered several Chabad rabbis whose “message and vision,” he said, inspired him as he was “searching for the truth.” He became Orthodox.

Tatik worked as the warehouse manager of a furniture company for several years. After the business went bankrupt, he sought a new line of work. A close friend advised him that he’d make a great school psychologist. He liked the idea, since he had always been interested in psychology, so he completed two master’s degrees, one in school psychology and a second in mental health counseling from Touro College. “I was 36, with two young kids and terrified,” he recalled. “Working with kids was a different mindset than managing a business with grown men.” But he soon discovered that he connected easily with young people.

He was working as a school psychologist at a yeshiva in Brooklyn when someone introduced him to the former principal of Jordan L. Mott, Shimon Waronker, who was also a Chabad Hasid. When the school’s dean got sick, he was hired in his place.

“I used to come home with stories about kids with anger problems. Fights. Kids breaking windows. Punching fences. Pretty strong things,” he said. Those stories are gone. “Now it’s so much happier that we’ve moved it to a different level. Now we can talk about what their education is about.”

In 2004 Jordan L. Mott was among the most violent schools in New York City, according to a list compiled by the New York City Department of Education along with the police department and the teachers union. The school was removed from the list in 2006, but remains among the city’s so-called Renewal Schools, which are entitled to special funding because they are considered troubled.

“They are really great kids,” Tatik said with genuine warmth about the students. “They come from difficult circumstances, from the poorest neighborhoods per capita.”

Roughly 94% of the students are entitled to free lunches because of their poor economic background. As a group, they are underachievers: According to a recent quality assessment by the Department of Education, only 2% of the students met state standards in math, and 6% in English, as measured by test results. In 2011, a review by the Department of Education deemed the school at priority status because the students were not meeting the benchmarks for New York State testing, a status that remains in effect today.

What all the students have in common is the need for a relationship with an adult who understands and believes in them, he says. For many kids, Tatik is that adult. “Who’s to say one of them can’t cure cancer?” he said, noting that he often tells them, “You’re just as smart as the kids on the Upper East Side, Long Island and Manhattan.”

His faith has not gone unnoticed by colleagues and students. “They see he wears his little yarmulke and his little strings. He prays. He eats certain food. He’s strictly by his religion,” said Edith Holloway, an assistant teacher. At a teachers conference earlier this year, Tatik drew attention by ordering in from a kosher Chinese restaurant. “I didn’t even know they have a Chinese restaurant for kosher people,” Holloway said. “Now other staff members like it, too. He turned them on to something new.”

But far from serving as a barrier that makes him a cultural mismatch dividing him from his subjects, Tatik says his faith helps him connect: “There is a feeling that we are all together as one in the world.”

Deena Yellin is a newspaper reporter in New Jersey whose work has appeared in The New York Times, Newsday, The Jerusalem Post and other publications.