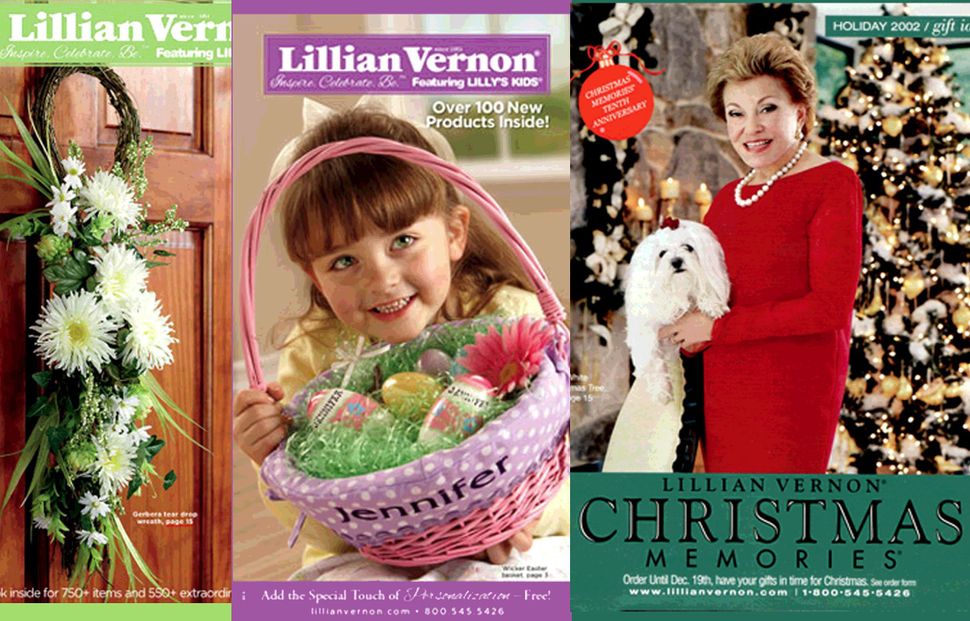 The song “Sugar Daddy” from John Cameron Mitchell’s musical “Hedwig & The Angry Inch” extols the thrills of sponsored shopping: “a Waterpik, a Cuisinart/ and a hypo-allergenic dog./ I want all the luxuries of the modern age,/ and every item on every page/ in the Lillian Vernon catalogue.”

Like Hedwig, much of America kvelled from the 1960s through the 1990s at the Lillian Vernon catalogue, which might be seen as the apotheosis of the tchotchke. It was the brainchild of Vernon, born Lilli Menasche in Leipzig, Germany in 1927, who died on December 14 at age 88. Long before the advent of the internet or telemarketing, Vernon’s catalogue was the place to go to find a magnetized bobby pin cup, a garden sculpture of a standing otter, a black powder compact shaped like a telephone dial, or a Leaning Tower of Pisa shaker for grated cheese. Like the post-war Miami Beach buildings designed by the American Jewish architect Morris Lapidus, Vernon’s catalogue was a horn of plenty, conveying an image of a country relishing excessive, trivial fun and jollity. As Vernon told “The New York Times” in 1997: “When I came to America, I loved Woolworth and the 5-and-10-cent stores. I felt comfortable there. The things they sold were pretty, usable and made you happy.”

The pursuit of more stuff to make you happy, an Epicurean ethos also known as retail therapy, was an overt attempt to reclaim business riches lost by her parents, prosperous Jewish merchants in Germany who were less assured as refugees in New York. Arriving on the Upper West Side in 1937, Vernon recalled in a 1996 memoir: “German discipline reigned in our household. We were expected to obey rules, no questions asked, no exceptions made…[Dinnertime meant] nonstop talk of shipments, orders, invoices. I sat, listened, and absorbed. Every meal was like a class.”

Her earliest memories from Leipzig included having anti-Semitic insults hurled at her on the way to school. The luxurious family home was confiscated by the Nazis in the 1930s and in 1935, her brother Fred was attacked by an anti-Jewish mob. Fleeing soon after to Amsterdam, the family reassembled in New York, although Fred would be killed in combat during the Normandy Invasion in 1944. Speaking of this loss to “Hadassah Magazine” in 2005,, Vernon stated with a degree of resignation: “I learned early in my life that you cannot get away from anything. There is nothing that can change destiny.” In reality anything but resigned, Vernon displayed galvanic resolve in founding her own mail order business at home in 1951, during the first of what would be three marriages. From these humble origins, her company grew until it became the first business founded by a woman listed on the New York Stock Exchange. Despite challenges and setbacks, she proceeded with panache and humor. In the foyer of her spacious Fifth Avenue apartment, a trompe-l’oeil bronze sculpture of a brown cardboard package would be displayed in subtle homage to the source of her wealth.

Her first-ever advertisement appeared in the back-to-school issue of Seventeen Magazine in 1951, offering a handbag for $2.99 and a matching belt in black, tan, or red for $1.99 plus free monogramming in gold: “Be FIRST to sport that Personalized Look on your BAG and BELT.” Before long, her catalogues would offer Americans not just a cheap way to feel original and trend-setting, but also witty, charming, and beloved, simply by purchasing items. In addition to reaffirming the customer’s sense of identity by monogrammed initials, Vernon also promised commercial fidelity through an endless money-back guarantee, so if after years had passed, shoppers suddenly felt disappointed with their monogrammed purchases, they could still return them.

As social historians know, mail order catalogues from Montgomery Ward; Sears, Roebuck; and other retailers contain rich lore for understanding societies that shopped from them. Vernon admitted to “The New York Times”: “In my business, it’s like being a social scientist, understanding what people like to buy.” The fact that such tchotchkes rarely produce the imagined joys is immaterial, since hope and pursuit are the essential elements. It is appropriate that as a long-time generous philanthropist, her name was given to The Lillian Vernon Creative Writers House at NYU, where quantities of trendy ersatz writing are trafficked, while aspiring to the rare unadulterated gem that brings fulfillment.

Appreciative of her Jewish heritage and making a point of selling Israeli linens, Vernon was honored as a Woman of Achievement by Jerusalem’s Shaare Zedek Medical Center. Even so, she informed Ute Mehnert, author of an online biographical essay that Jewish origins were not the key inspiration for her entrepreneurial achievements: “I think being an immigrant is what shaped me – striving to succeed and get ahead…My religion and [ethnic] roots were not the factor.”

A self-created aura nurtured her development as well. Claiming to be five foot three inches, when in reality she was noticeably shorter than that, she also claimed to be born in 1929, if and when she deigned to choose a precise year. Such coquetry is entirely understandable in this creative entrepreneur. Her toughness, temper, and impatience was sometimes made evident to subordinates, and she declared in 1992 to “Forbes Magazine” about feminism: “You’ve got Gloria Steinem and whatever her name is … Betty Friedan. They just talked about it. But you know what? I went out and did it.”

This justifiable pride also glowed in 1999, when Vernon offered advice to the readers of “Fortune Magazine” about starting a new business: “Live like a miser in the beginning. Reinvest all the money you earn. In Thornton Wilder’s play ‘The Matchmaker,’ there’s a line to the effect that money is like manure—it should be used to make things grow.” Paraphrased from Thornton Wilder’s 1954 play where it appears as the philosophy of Dolly Levi, the maxim echoes the 17th century author Francis Bacon who wrote in “Of Seditions and Troubles”: “And money is like muck, not good except it be spread.” Spreading hers and doing good, Lillian Vernon will long be remembered with admiration and esteem.