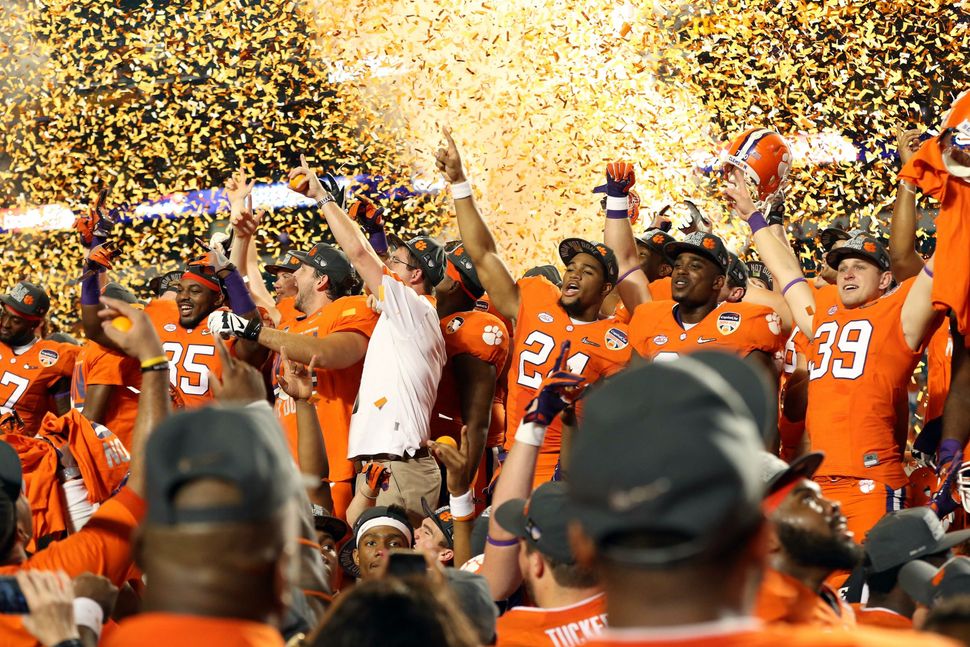 In the lead up to tonight’s National Championship football game, we have provided thorough coverage of the Alabama Crimson Tide’s exceptional season through our own Birmingham Jewish Federation lens. After finding out last week who Alabama’s final opponent would be, however, we decided to do a little “scouting” our competition. Therefore, we set out to learn more about Clemson University, particularly Jewish life there.

It did not take long for us to figure out that Clemson, sometimes called Auburn with a lake, has a lot in common with Alabama’s historic in-state rival. Football fans are likely already aware that the two share the Tiger as a mascot, but the similarities don’t stop there. The schools have similar sized enrollments, and both are named for the respective small towns they call home. In their earliest days, both were public land-grant schools with major agricultural programs.

As we kept digging, and interviewing Jewish students and faculty at the South Carolina school, we found that Auburn and Clemson shared another characteristic of particular importance to us at the BJF — both schools have small but vibrant Jewish communities.

While no one knew the exact numbers, those we spoke to estimate that Clemson has approximately 300 Jewish students. However, according to Caleb Cohen, a senior majoring in electrical engineering and Clemson Hillel’s President, the small size doesn’t restrict the community. “While smaller than those at other universities, Clemson’s Jewish community is alive and present,” he said.

Clemson’s Hillel, which has at least 90 members, provides support for any student showing an interest in Judaism, Caleb explained. “We hold both religious and social events, including discussions, bagel brunches, Passover Seders, Hanukah parties, and movie showings.” Caleb said that the organization is designed to allow all of its members to play leadership roles. “We emphasize student involvement and frequently invite members to help plan events that they are personally interested in,” he said.

According to Caleb, the school’s small Jewish community is able to flourish because of the school’s open environment. “I would say Clemson is a good place for any student — Jewish students included. Our university has a diverse student population and many subcultures, and I would say the vast majority of students feel connected as part of the Clemson family.”

Adam Lipsitz, a junior majoring in Computer Engineering, shared Caleb’s sentiments. “Clemson is a wonderful school that welcomes everyone into the ‘Solid Orange’ family,” said Adam, who is the webmaster for the Clemson Hillel’s website. Adam praised Hillel faculty advisor Dr. Peter Cohen for his role in maintaining the strong Jewish presence on campus. “Dr. Cohen has been indescribably supportive in helping our campus Hillel grow,” he said.

Dr. Cohen, a senior lecturer in Religion who has called Clemson home for more than 20 years, doesn’t take too much credit. “I just see my job as a facilitator,” he explained. “Hillel is here to facilitate anything the students need,” he said, noting that most Hillel events have roughly 20-25 students in attendance. In addition to its own programming, Hillel co-sponsors events with many of the other 40 religious organizations on campus.

As is the case on many campuses with smaller Jewish populations, Dr. Cohen works with the administration and other faculty members to ensure sensitivity to issues that affect the Jewish community. Among other things, he recently arranged for the daughter of a Holocaust survivor to speak at an event open to the entire Clemson community.

While Dr. Cohen can’t recall a single anti-Semitic incident in his two decades at the school, he does take it as his responsibility to educate other faculty to ensure class assignments don’t conflict with Jewish holidays. He applauded the school’s administration, noting that the Clemson community has become much more aware of these issues in recent years.

The school itself is located in the tiny town of Clemson, South Carolina with a population of less than 15,000, but it is adjacent to larger cities including Greenville and Anderson that make up what’s known as South Carolina’s “Upstate” area. There are two synagogues, a small federation, and a Chabad presence in Greenville and an additional synagogue in Anderson. The Greenville Federation’s website states that there has been a Jewish presence in the area since 1878.

According to Adam, Caleb and Dr. Cohen, the local Jewish communities are welcoming to Clemson’s Jewish students. “The Clemson-area Jewish community has consistently welcomed students into their synagogues, their homes, and even their families to help us remain close to our heritage while away from our homes,” Adam said.

Hillel works with the local synagogues and Chabad to ensure that every Jewish student has a place to worship, and Hillel students often attend Jewish community events in the area. This Friday, Hillel students will be attending the Greenville Chabad’s community-wide Shabbat dinner called Shabbat 180.

Fortunately, we all were able to put our football differences aside as we discussed the importance of Jewish life on campus. (As an Alabama graduate, this is a skill I’ve had to develop at the BJF, given the work that our Federation and Foundation do to support Jewish life at Auburn.)

But that all ended when my new Clemson friends started making game predictions. Dr. Cohen didn’t have a real opinion about tonight’s match up, but both Caleb and Adam were fully supportive of their team. “I think the Tigers will win,” Caleb told me. “I do not think it will be an easy victory, but I believe there is a reason why we have gone undefeated, and I know the team has a good attitude and excellent leadership.”

Because of the great work he seems to be doing as a leader at Hillel, I’m able to forgive Caleb’s analysis. However, as tonight’s game approaches, I can’t help but hope Clemson and Auburn end up with one more similarity before the night is over. After all, the Crimson Tide haven’t lost to a Tigers team this season, and hopefully they won’t tonight!

Daniel Odrezin is the assistant executive director of the Birmingham Jewish Federation. This essay first appeared in The Update, the group’s official publication