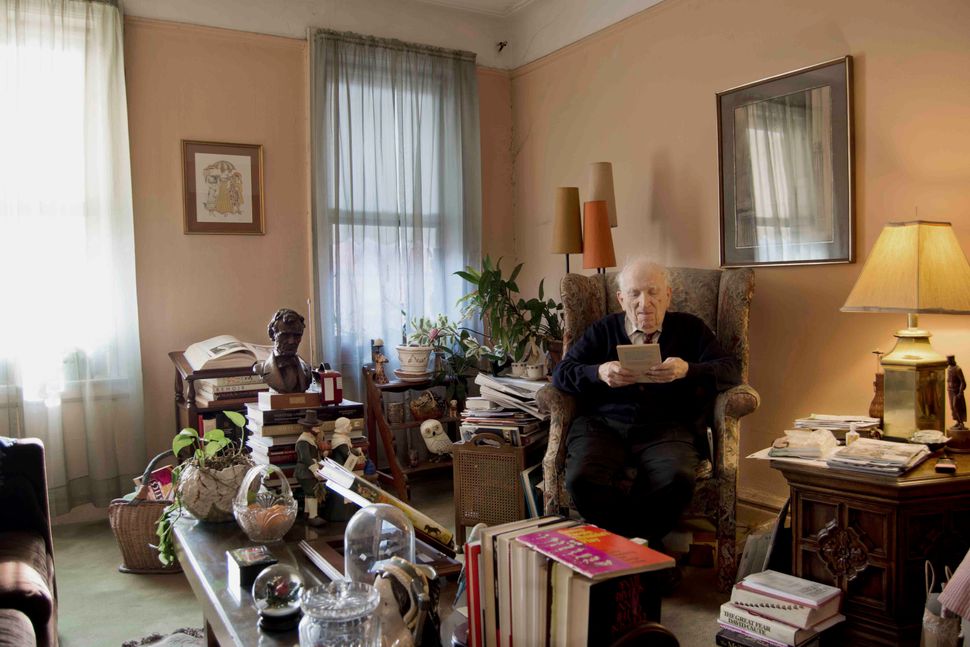 In a dim third-floor apartment on East 88th Street in Manhattan, strewn with potted plants, unopened mail and bronze statuettes, 96-year-old Larry Eisenberg writes limericks on the MacBook Air his children bought him and posts them in the comments sections on The New York Times’ website. Sometimes he can be politically pointed and sassy, showing off his historical knowledge while taking a liberal stance.

What’s a more mediocre pitch
Than giving tax cuts to the Rich?
That “trickle down” twaddle
Is hardly a model
It scratches the one percent’s itch!

He now boasts more than 10,000 poems and has garnered an extensive fan base since he began dropping rhymes in 2008. So much so that three years ago, the Times wrote a tribute for his 93rd birthday, and this past December the newspaper included him in a roundup of its most popular commentators — though Eisenberg later griped about the lengthy photo shoot for the piece, and how he ached after posing for so long.

Other readers respond lovingly and in fond envy of his talent (“Larry is a genius”; “OMG!! He is brilliant.”), often attempting their own verse. He has become a staple of the Times’ website, and yet many readers probably don’t know him at all. They probably don’t know that he trained in counterintelligence during the war, or that he designed the first transistorized pacemaker, or that he has written dozens of science fiction stories, which he keeps sealed in Ziploc bags.

Eisenberg and his wife, Frances Brenner, don’t leave their apartment much anymore. They’ve enlisted a couple high school students to bring up their groceries.

Eisenberg buzzed me up to his apartment, and before I rounded the last flight of stairs he had already opened the door. He beckoned me inside a narrow hallway that leads to a sitting area. The paint on the ceiling was peeling off in disks the size of pancakes, and the thin curtains remained closed.

He led me to the living room, where his wife was seated in a floral armchair. Eisenberg took a seat in the matching one next to Brenner’s. The lamp between them was the only one lit in the apartment, releasing a golden cone of light that barely illuminated their faces.

I sat on a brown velvet couch across from them. On the glass coffee table between us there was an array of knickknacks: a snow globe, a bobblehead of the Mets pitcher Jacob deGrom, and a bust of Abraham Lincoln. Parked in a corner was a teal Oreck vacuum cleaner that seemed to be collecting dust.

Eisenberg was born December 21, 1919. He grew up in Queens during the Great Depression, a time he described as “severe.” Money was tight. Brenner chimed in to talk of her father waterproofing his shoes with newspaper as he searched for work.

From a young age, Eisenberg wanted to teach. He couldn’t afford college, so he attended City College, which was free. But his family couldn’t even afford textbooks. Luckily, his wealthy uncle gave him a job for the minimum wage of 25 cents per hour for 32 hours a week. He gave his mother half his earnings.

He enrolled in school and earned a Bachelor of Arts in mathematics in 1940. In order to become a high school teacher he needed to pass a speech exam, but he failed when the examiner discovered an impediment, though Eisenberg couldn’t pinpoint one and neither could I.

He took a job as an electrical engineer for Western Electric, partially owned by Bell Laboratories, in Bayonne, New Jersey, in the radar department. Many of his friends had been drafted into the Army, but Eisenberg had poor eyesight and wasn’t accepted.

His time at Western Electric was short, as he tried again in 1945 to apply for the Army. This time, the eye examiner made a mistake and let him in. He became a radar operator and also studied wire-tapping and safecracking. He could forge even the most obscure signatures. Before he could put those skills to use, though, he was discharged in 1946, at age 26.

His dating life afterward proved unfulfilling, and by the time he turned 30 he wanted to settle down. A friend named George Gordon suggested he reach out to a Jewish girl who had just returned from Europe, someone Gordon knew through his spouse. Her name was Frances Brenner, and she wore her hair in milkmaid braids. So, Eisenberg called her up, but she responded, “I don’t go on blind dates.”

She invited him over to a gathering with her brother and some friends, and soon Eisenberg began a 10-week courtship, at the end of which, the couple married at city hall without telling his parents.

In 1958, Rockefeller University hired Eisenberg for $9,000 a year to work in the engineering lab.

“We did wonderful things at Rockefeller University,” he mused “I loved it. I loved going in every day.” He walked the 20 blocks to work and then returned home to tend to his shepherd, Scout, and his golden retriever, Beau, whom he and Brenner adopted from New Hampshire.

The same year Eisenberg started the job, a biophysicist named Alexander Mauro started work on inventing a pacemaker that eliminated the wires connecting the device implanted inside the body to its control box operated outside the body. The open wound was prone to infection. Plus, Eisenberg said, doctors disliked the idea that a patient was in arm’s reach of the controls.

Mauro and William Glenn, a heart surgeon, were working at Yale University School of Medicine and approached Eisenberg to engineer a radio transistor version. He set to work and came up with a design.

Afterward, they tested the device on dogs, which Eisenberg spoke about in a small, cracked voice of shame. Soon he went to Yale to test the device on two patients. He saw the men being transported into the room on stretchers, but had to wait outside during the operation. He walked into the room after the procedure and saw them sitting across from each other, playing cards. It had worked, and he cried.

Over the years, doctors often called in Eisenberg to fix glitches in the pacemaker or to evaluate a problem. In one instance, a pacemaker wasn’t working properly after it had been inserted into a patient. The woman was lying on the table, her chest spliced open and the pacemaker visible. Eisenberg became queasy, but he managed to locate a loose wire.

“That operation should have never taken place,” he said, shaking his head.

Eisenberg was promoted to assistant professor, senior research associate and co-head of the electronics laboratory. He left Rockefeller in 2000 and briefly consulted for a noise-cancellation company before retiring completely.

I asked Eisenberg about his notoriety in The Times, and he said, almost dismissively, “Oh, I’ve been writing limericks for years.” He segued into his other published works. For the first time in our conversation, he stood up to fetch a Ziploc bag containing his books of science fiction and published poems, including his paperback “Limericks for Lantzmen” from 1965, which he wrote with Gordon, the man who introduced him to Brenner. For years he also published poems in magazines, like Harper’s.

He brought the pile of paperbacks to the couch and leaned over me as we read the inscriptions dedicated to his parents.

One of his best-known short story series chronicles a character named Duckworth who is a mixture of personalities Eisenberg has met in his lifetime, including scientists he worked with at Rockefeller, and himself. When the story ends, Duckworth manages to secure several Nobel Prizes. Eisenberg always hoped he would win one for his work on the pacemaker, but he never did.

For now, though, he still has The Times.