In Italian Comedy, Life Is Beautiful But Prejudice Is Hilarious 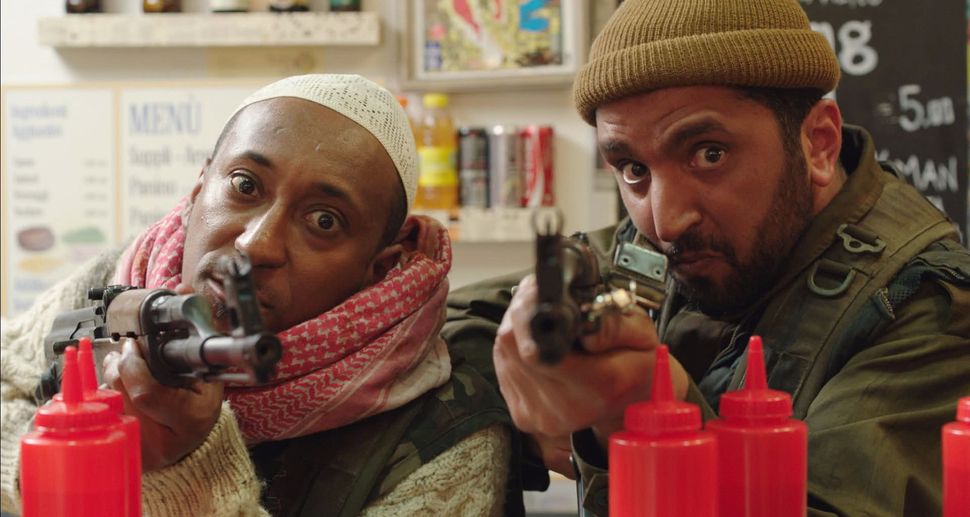 Image by Courtesy of Alberto Caviglia

If most people wouldn’t consider rampant anti-Semitism to be a fertile or likely source of genuine cinematic hilarity, consider this: A few months back, Alberto Caviglia, a 31-year-old Italian Jew, won first prize for an Italian movie in the young director category of the Venice Film Festival for a mockumentary with just that subject matter: Jews loathed, beaten and ridiculed — and anti-Semites perceived as unhappy, misunderstood victims brave enough to defy convention. “Burning Love,” a reference to the characters’ penchant for blithely torching Jewish artifacts, is Caviglia’s first film. It cost less than $700,000 to make, has received rave reviews (Variety called it a “deliriously funny… biting satire”) and is on its way to becoming a cult feature throughout a fair portion of Europe.

Initially, however, Caviglia, a slender, intense moviemaker who constantly questions himself, had serious doubts about whether he should make the film at all. In the first place, a number of his relatives were horrified by the idea of a broad comedy that posits a dystopia in which, as the director puts it, “people don’t consider anti-Semitism as a negative but more kind of like a great personal skill.” In the second, the film reveals, utterly deadpan, that its anti-hero possesses a kind of genetic abnormality — anti-Semitism, of course — that allows for all sorts of viciousness that flourish under the capacious umbrella of tolerance. Because his anti-hero (played by Davide Giordano) was actually “born an anti-Semite,” Caviglia explained to me, “the society he’s in thinks he should have the right to express himself, and those who don’t allow him to express his anti-Semitism are considered the oppressors!” Indeed, certain characters (played in the movie by real-life prominent Italian intellectuals) solemnly refer to any disgust with prejudice as antisemitismphobia — a word that is the director’s own gleeful invention.

But would audiences understand such bitter satire, Caviglia wondered. Or would they consider the plot itself forbidding and cruel? Or even worse: Would audiences interpret the movie as a cinematic rationale for oppression? At first, the director said, the whole thing “really scared me, actually. I thought doing such a film would be dangerous, disrespectful of Jews.”

Then he thought again.

“All the common ways of treating anti-Semitism were becoming weaker and weaker – weak in the sense that people’s minds weren’t being changed any more by treating it seriously,” Caviglia decided just weeks before starting to film. “So it’s getting ever more difficult to even talk about the subject in Europe.” In other words, as he pointed out: “It’s slowly becoming more okay to be anti-Semitic.”

As Caviglia also realized, although much of the prejudice arising these days is flimsily disguised, some of it is pretty blatant. France and Belgium are by no means the only countries giving rise to loathing and fear. In Italy, home to 30,000 Jews, Rome’s largest synagogue and the Israeli Embassy received severed pigs heads just two years ago, and posters called for a boycott of Jewish shops.

“I didn’t attend Jewish schools in Rome, and most of my friends aren’t Jewish,” Caviglia said. “But when I was in high school it was hard, because even if the anti-Semitism isn’t obvious and in-your-face, some of it is kind of unconscious.”

He thought back on those early years: “There were jokes about Jews in general, about all the money Jews supposedly had, all that stuff. You are used to all that prejudice. I think that the Catholic Church here is responsible for that in some ways – even though these days the church is trying hard to fight all that. Still, we are talking about centuries of anti-Semitism. You don’t erase all that in one day.”

In fact, in one of the mockumentary’s more memorable scenes, a priest dressed in black gravely asks a group of giggling schoolchildren to identify “the bad, ugly people who murdered Jesus.” They are delighted to respond.

There was another, final reason that this movie needed to be made, Caviglia believes. “Most of the movies about anti-Semitism are in truth about the Shoah, or the after-effects of the Shoah,” he said. “This may be the first movie about the causes: the human hypocrisy that generates prejudice. It is also about the necessity of human beings to have an enemy, because without an enemy you don’t exist.”

The young director thought about all this for a moment. Then, reflecting back on his youth, he said: “You know, at one point I just stopped answering anti-Semitic comments from anyone. Stopped flat.”

Caviglia gave a rare smile of satisfaction. “So what makes me happy about this movie is that it is sort of my answer to everything,” he said.

Judy Bachrach is a contributing editor at Vanity Fair.

In Italian Comedy, Life Is Beautiful But Prejudice Is Hilarious