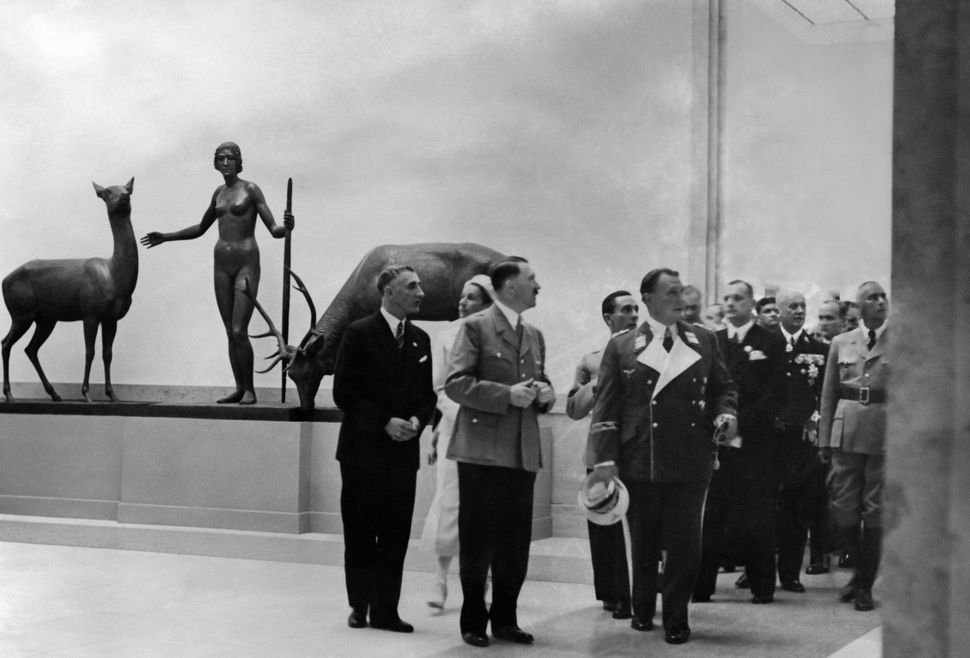 If you find yourself in Munich between now and March, then William Cook of The Spectator.” The exhibition, if you hadn’t guessed from the time frame, focuses on modernism, showing work by the likes of Gerhard Richter and Karel Appel. To hear Cook tell it, the exhibition is interesting, but relatively safe. Artist like Appel and Richter are modern art titans for a reason, but their ubiquity and widespread acclaim have turned their work, and work like theirs, into a new orthodoxy.

If the exhibition itself isn’t particularly remarkable, then perhaps the setting is more interesting. The Haus der Kunst was built by Adolph Hitler in the late 1930s to be the primary repository for the Nazi’s fine art. The museum, which used to be known as the Haus der Deutschen Kunst (House of German Art), was the location of the infamous “Great German Art” exhibition of 1937. The exhibition, which featured primarily landscapes, heroic nudes, and family scenes, was put on in conjunction with the better known “Degenerate Art” exhibition, which featured artists like Paul Klee and Max Beckmann and, as Cook writes, may have unwittingly been “the greatest modernist exhibition of all time.”

The contrast between the two exhibitions was stark. On the one hand, the “Great German Art” was remarkably unoriginal, staid, and boring. On the other, the “Degenerate Art” was “degenerate” precisely because of its exciting originality (or its Jewish roots). The common view of Nazi aesthetics reflects this dichotomy: if the Nazis liked it, it was bad. If they hated it, it was great.

The internal logic is hard to question, but Cook’s uncomfortable suggestion is that some Nazi art was actually pretty good. Housed in the Pinakothek der Moderne, just a kilometer away from the Haus der Kunst, is a room displaying 11 paintings that had received official approval from the Nazi regime. Cook writes that, “amid the usual trawl through 20th-century modernism,” these 11 paintings are the most interesting works on display. In particular, Cook praises “The Four Elements” by Adolf Ziegler, a notorious Nazi sycophant.

Cook’s uncomfortable suggestion is not just that we go see these works in Munich, but that we reconsider our Manichaean conception of Nazi aesthetics. “It would be so much easier if bad men and bad politics made bad art,” Cook writes, “But when you look at this picture with fresh eyes, you’re forced to acknowledge an awkward truth. Despite the repugnant morals of the man who made it, it’s actually not that bad.”