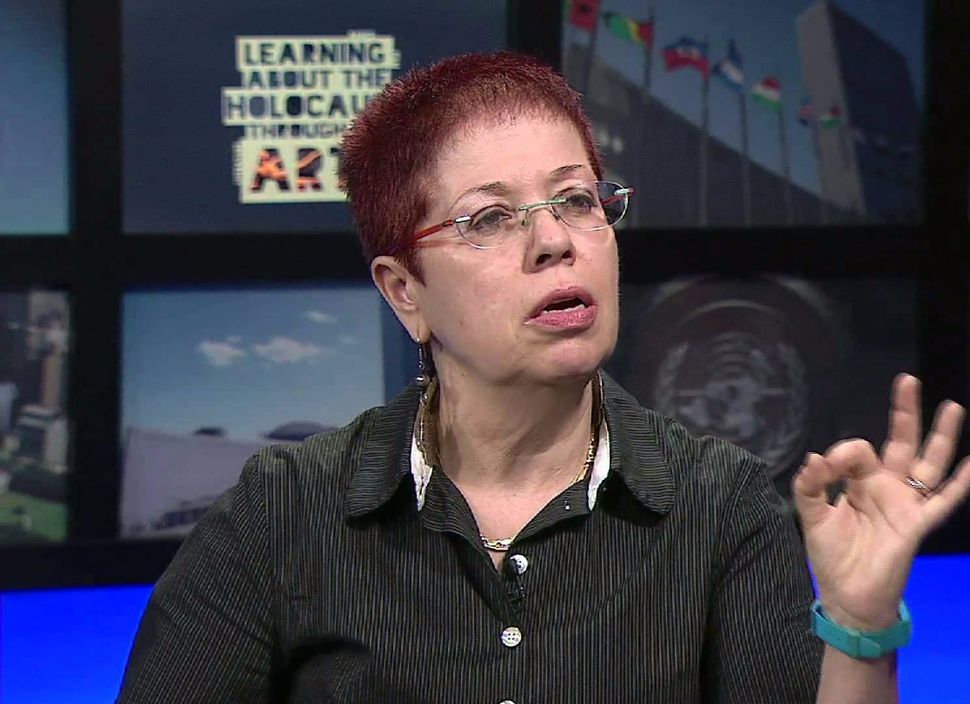 The boom in Jewish alternate history continues. Following on the heels of Lavie Tidhar’s novel, “A Man Lies Dreaming” (about Adolf Hitler failing to become the Führer of Nazi Germany), Emily Barton’s “The Book of Esther” (about the medieval Jewish Khazar kingdom persisting into the 20th century) and Simone Zelitch’s “Judenstaat” (about a post-Holocaust Jewish state being established in Saxony), Israeli writer Nava Semel’s new novel, “Isra Isle,” imagines a Jewish homeland being established on an island near Niagara Falls. Originally published in Hebrew in 2004, the English edition (beautifully translated by Jessica Cohen) offers an engrossing, if at times confounding, narrative about Jewish history as it might have been.

The novel is less an integrated narrative than it is a triad of short stories linked by a common theme. The three tales are set mostly in the same place — Grand Island, New York (a small island in the Niagara River, just northwest of Buffalo) — but they unfold in different eras. Part I takes place in the days leading up to the terrorist attacks of September 11, 2001; part II is set in the 1820s; part III is set in the third decade of the 21st century.

The plot of “Isra Isle” is based on the actual, if ill-fated, 1825 plan of the American Jewish journalist and diplomat Mordecai Manuel Noah to create a Jewish settlement known as “Ararat” on Grand Island. In exploring the plan’s fate in three different worlds — the present, where the plan is never realized; the 1820s, when it still has potential, and a future world, where it actually comes into existence — the novel offers a range of comments about the dilemmas of Jewish statehood. Indeed, by exploring how the development of a Jewish state in North America might have shaped Jewish (colonial) relations with Native Americans, the novel offers an allegory about the current state of Israel’s precarious relationship with its Arab neighbors.

Part I is a quasi-detective story: Manhattan-based Native American detective named Simon T. Lenox is trying to track down Liam Emanuel, a missing Israeli airline passenger who was last seen on a flight to JFK Airport from Tel Aviv. Lenox’s investigation eventually brings him to Grand Island, where he encounters the missing man. When they meet, Emanuel shows Lenox the original deed of ownership for Grand Island, which he has just inherited from his recently deceased father. The document’s symbolism, and that of the two men’s encounter, centers on Emanuel’s disclosure that the document has long been stored in a boydem (a Yiddish term literally meaning an attic, but also a place for hiding things and, thus, a symbol of a refuge). As the two men debate the merits of pursuing the document’s potential for world Jewry, it becomes clear that the original Ararat plan has the potential to become a geographical boydem — a hedge against the potential failure of the State of Israel in the rough-and-tumble Middle East. Part I ends with Lenox experiencing a tragic fate, but his final admonition to Emanuel is not to give up on his ancestor’s dream.

Part II, set in the 1820s, depicts how the local inhabitants of Grand Island view Noah’s utopian plan for a Jewish homeland. The most important local figure is a Native American woman who has been given the nickname “Teibele” (Little Dove) by Noah himself. She initially feels displaced by Noah’s purchase of her island and is urged by the spirit of her departed ancestors to kill Noah. But after overhearing her abusive employer — a member of the white landowning Lenox family — discussing how the Jews of Ararat will be confined to the island like Indians on a reservation, Teibele begins to empathize with the Jewish people’s yearning for a homeland. Especially as Noah begins to have frightening visions of the future 20th-century Holocaust, she urges him to pursue his utopian dream. She willingly enters into a sexual relationship with him, becomes pregnant and starts a line of descendants.

Part III imagines a world in which Ararat has evolved into Isra Isle — an autonomous religious polity within the United States of America. As narrated by Simon, the African-American lover of Jake (yet another descendant of Mordecai Noah), Isra Isle is home to 6 million Jews who live in a forest of Dubai-like supertall skyscrapers built partly upon artificial islands in the river. The state has fulfilled its purpose of being a refuge for the world’s Jews (Europe’s Jews have successfully fled from the Nazis, although “the Gypsies, the handicapped, the mentally ill, and the homosexuals” are murdered). Yet while Isra Isle struggles to be a normal state, its original purpose weighs on its citizens. Jake is estranged from his grandmother — a refugee from Nazi Germany whose enduring anxieties about persecution turn him away from his Jewish identity. Meanwhile, the state’s female governor, Emmanuelle Winona Noah, campaigns for the U.S. presidency (the outcome is left in doubt), citing the compatibility of her Jewish-Native American heritage with American values. Part III — and the novel overall — concludes on a bleak note, however, with Jake traveling to the coast of “Grand Palestine,” a Muslim state devoid of Jews, and scattering the ashes of his grandmother (and the ill-fated Lenox) to the wind.

“Isra Isle” presents in numerous small paragraphs that are spare in exposition but rich in literary symbolism. The novel features an extensive array of recurring images, including (beyond the ubiquitous boydems) references to biblical stories, Native American mythology, types of birds, and sundry objects, such as javelins and canoes. Semel also interweaves relationships across time and space between the novel’s Jewish, Native American, White Christian European, African American and gay and lesbian characters, showing how names and identities blend and intersect in different historical circumstances.

Readers can decide for themselves how actively they wish to decode the significance of what at times can seem to be a surfeit of interconnected symbols. But they will not be able to avoid wrestling with the many questions that Semel poses about modern Jewish history.

The questions include whether the Jewish yearning for national self-determination could have been achieved in more peaceful and harmonious fashion; whether the quest for a Jewish homeland was destined to displace another people (if not Palestinians, then Native Americans), and whether or not the Jewish quest for normalcy can ever triumph over the desire to preserve a secret boydem.

Still, the novel may leave some readers wanting more. Those who wish to discern Semel’s own authorial stance will struggle to find any clear message among the many competing voices. Aficionados of alternate history, meanwhile, may chafe at the novel’s many implausibilities. Although it may be unfair to deny Semel the literary license to alter the past’s historicity as she wishes, the most effective counterfactual tales are those that provide maximum grounding to their exposition. Semel’s novel never really explains the (constitutionally unlikely) means through which Isra Isle becomes part of the United States, nor how the state manages to hold 6 million people in its 28.5 square miles (Manhattan contains 1.6 million in its nearly 23 square miles).

In the end, the novel’s greatest significance lies in articulating the growing interest among many Jews in exploring alternate paths of Jewish historical development. At a time of growing concerns about the long-term security of the State of Israel, it is not surprising that counterfactual scenarios are proliferating on Jewish subjects. Whether they express fantasies or nightmares, wondering “what if” about the Jewish past expresses the present-day struggle to cope with the uncertainties surrounding the Jewish future.

Gavriel Rosenfeld is the editor of “What Ifs of Jewish History: From Abraham to Zionism,” due for publication in late October by Cambridge University Press.