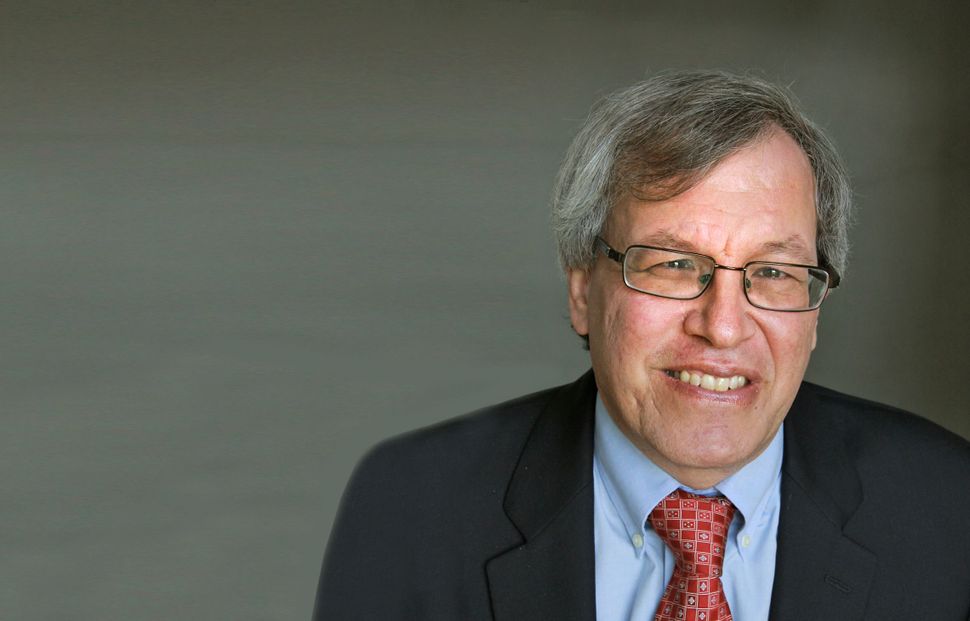 After Erwin Chemerinsky agreed to an interview with me, I sent a benignly gloating text to a friend who, in high school, had been my teammate in an intensive constitutional law competition.

Chemerinsky is something of an icon in the field of Constitutional law. Now, making news as one of a team of lawyers from Citizens for Responsibility and Ethics in Washington – CREW – suing President Donald Trump for allegedly violating the Constitution’s Emoluments Clause, Chemerinsky is facing an unusual opportunity. There is no existing Supreme Court precedent regarding the Emoluments Clause. If CREW’s case arrives at the Supreme Court, it will make legal history.

That would be another notch in Chemerinsky’s already impressive legal belt. He’s dean of the law school at the University of California, Irvine, and previously taught at the law schools of the University of Southern California, DePaul University, and Duke University. In 2014, he was found to be the second most-commonly-cited law faculty member in scholarly articles published between 2009 and 2013. (The first is Cass Sunstein.) His case law tome “Constitutional Law,” now in its fourth edition, is a common guide to the field for students and professionals alike. He’s argued multiple cases in front of the Supreme Court, but also been a critic of that body, recently publishing a book condemning it for failing “through American history, at its most important tasks, at its most important moments.”

Chemerinsky is also, as you might get from that excerpt, no stranger to controversy.

He’s taken publicly liberal positions on issues from free speech to gun control, occasionally drawing conservative ire. Most dramatically, after Chemerinsky signed a contract to become the founding dean of the University of California, Irvine School of Law in 2007, the university’s Chancellor, Michael V. Drake, voided the contract, explaining he felt Chemerinsky’s comments had been “polarizing.” Legal scholars from across the political spectrum came to Chemerinsky’s defense, and the contract was reinstated.

On February 9, Politico reported that after Trump’s inauguration, a lobbying firm employed by Saudi Arabia had paid for a room at the president’s Washington, D.C. hotel occupied by a veteran speaking to Congress on Saudi Arabia’s behalf. It was the first publicly revealed instance of a foreign government making a payment to one of Trump’s businesses; governments traditionally pay the expenses of those representing their interests.

That same day, Chemerinsky spoke about the Emoluments Clause case – which concerns the Constitution’s prohibition of federal employees drawing benefits from foreign governments – as well as the larger state of Constitutional law with the Forward over the phone. Read excerpts of that conversation below.

Talya Zax: Walk me through the history and contents of your case against the president.

Erwin Chemerinsky: Sure. Article I, Section 9 of the Constitution says that somebody who holds a position in the federal government cannot receive a present or an emolument from a foreign government. Emolument is a broad term that refers to benefits. Donald Trump, because of his business holdings, is constantly receiving benefits.

I think that it’s clear that the president is violating the Constitution. What the suit is about is the very basic principle that no one, including the president, is above the law.

Legal experts have questioned whether or not your case will be deemed to have standing to appear in front of the courts: That is, whether CREW can establish a personal harm incurred by what you argue are Trump’s violations of the Constitution. What are your thoughts on that?

There’s a Supreme Court case, Havens Realty Corp. vs. Coleman, that says that an organization has standing if they allege a practice is distorting their distribution of resources. I think we have really good case law on our side.

What are your greatest concerns about the case? Greatest confidences?

I think that the strongest aspect of the case is the presence of this article in the Constitution. I think that we’re right on the merits. It’s always difficult to ask a court to say to the President of the United States you’re violating the constitution, and of course there are questions of standing. [But] There’s no doubt to me that he’s benefiting from foreign governments every day.

Have you been following the news of Trump’s criticism on Twitter of Nordstrom for dropping his daughter Ivanka’s line? Do you think this very public demonstration of his lack of removal from his family’s business will influence how your case is received?

It isn’t directly related to the Emoluments Clause, because I don’t know of foreign governments buying, but I think it does relate to the serious conflicts of interest that exist, and I think it reflects the tremendous insensitivity Donald Trump has to the separate roles of president and businessperson. The underlying issue is whether President Trump will really separate himself while president from his business interests. What he said about Nordstrom shows he’s not doing that.

What do you see as the long-term stakes of this case, even beyond Trump’s presidency?

Well, to me the underlying question is the willingness of the courts to voice the Constitution. I think that Trump is a unique president so I think the Emoluments Clause is likely to be unique to him. It might not be.

What do you believe are the most pressing Constitutional issues of the moment, aside from your Emoluments Clause case against Trump?

Well, I think that the issues with regard to the immigration ban are enormously pressing. To me there’s again an underlying principle, and that is that we should never assume somebody is more dangerous because of his or her religion, or race, or ethnicity, or national origin. It’s just wrong to discriminate based on religion.

I thought the most important question on Tuesday in the oral argument was when the judge said are you saying, even if the president said we must exclude all Muslims, there must be no judicial review? Maybe it’s because I’m Jewish, I’m sensitive to the government saying this religion is not acceptable.

It seems like almost every day with Trump there are new Constitutional issues. I think he’s attacking the judiciary. There are real questions about judicial independence. I just think we’re going to see a whole series of Constitutional issues that are created by the Trump presidency. I think another example is a different executive order that says he’s going to take away federal funds from sanctuary cities raises big Constitutional issues. The Supreme Court has said that Congress can’t force state and local governments to adopt laws, that congress can’t use strings on grants to coerce local and state governments.

You’ve written before on the danger to free speech of the heckler’s veto, which is the practice of denying someone the opportunity to speak by shouting them down. What do you make of the University of California at Berkeley’s recent decision to cancel “alt-right” provocateur Milo Yiannopoulos’ speech there after violent protests against him?

I think that all ideas and viewpoints should be able to be expressed on a college campus. Generally, we shouldn’t cancel speakers because the audience doesn’t like the speaker. But, if public safety is such that there’s no alternative – in this instance, the campus was committed to having Milo be able to speak; they got law enforcement from nine different campuses to come help them. I think that the campus did what it had to do in cancelling the speech.