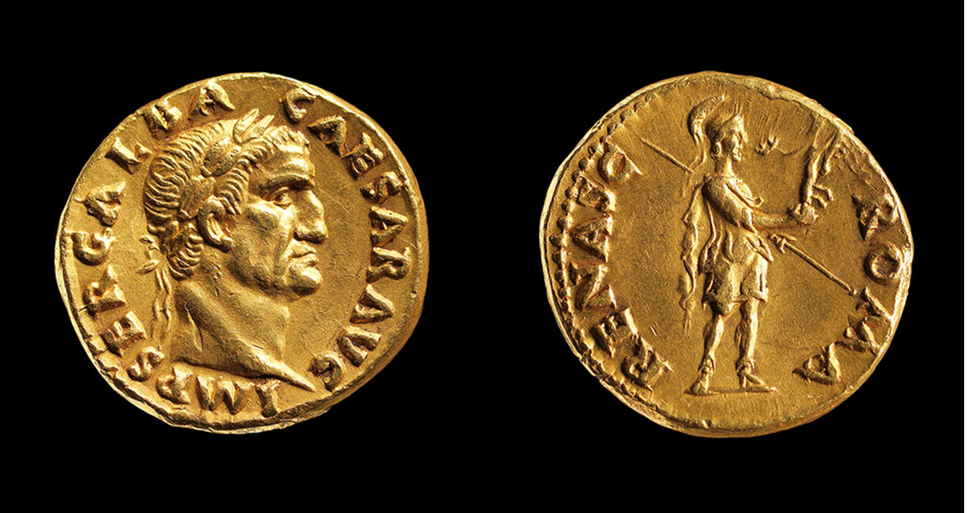 Just past the display of coffins from 13th-century BCE that once belonged to military legend and antiquities obsessive Moshe Dayan, a remarkable new exhibit of Roman coins at The Israel Museum, in Jerusalem, feels strangely contemporary. Before magazine covers, television shows, “fireside chats,” Twitter, and, of course, Donald Trump, coins were a method of asserting power and manipulating image — and they are especially worth thinking about now.

Only the emperor himself had the right to issue gold coins in Rome; the Senate could issue merely silver and bronze. Almost all Roman coins in this exhibit are aurei, from the Latin aureus for “golden,” and weigh about 7 grams each. As I bent down to get a good look at thumbnail-sized portraits of emperors long dead, what struck me was not the glitter of ancient gold, but how Romans couldn’t possibly avoid seeing the emperor’s face while living their daily lives; his face was literally in the palms of their hands.

I could not help feeling some commonality with the ancient Romans.

We, too, must deal with politics — however distasteful — reaching into the palms of our hands. We are now living in the era of a president who has also managed to find his way into every crevice of our daily life, into our hands, through cellphones that constantly beep, in response to a news cycle that jumps at his every outrage.

Part of having power, I thought as I looked at the coins, is knowing how to make oneself — or more accurately, one’s image — ubiquitous. Perhaps compelling people to hit “retweet,” creating more and more versions of one’s message, is not that different from forcing one’s face onto coins, and having more and more of them made.

It turns out that coins made by the powerful have a fascinating history. Julius Caesar (100 BCE-44 BCE) was the first Roman to put his portrait on coins, and at the time, a depiction of a living ruler instead of a god or ancestor was revolutionary. Caesar’s bold move of portraying himself as a god may have even led to his demise. Interestingly, Caesar’s successors — after the infamous betrayal that captivated Shakespeare — also made coins with his image. I stared hard at a Caesar coin issued by Octavius, with a diameter of 20 millimeters and a weight of 8.23 grams of gold, as well as a video offering a close-up of it, and thought about how easy it is to rewrite history, or to recoin it.

The right visuals can go a long way, and the truth has always been easy to manipulate in, well, gold, glitter, or any kind of shiny distraction. The glare of a cell phone is just the latest version. But perhaps it is soothing to consider that we are not the first to struggle with truth versus illusion, and not the first to have falsehood forced into our hands.

Next, I looked at coins of Augustus, (27 BCE-68 BCE), who portrayed himself as a young man, even decades after he most certainly was not. But after Augustus, the wrinkled portrait trend returns to coins. The idea that maturity was a valuable trait in rulers was popular in Rome, and even then, appearance really mattered. “Literary sources from the Roman Period indicate that it was common to draw conclusions about a person’s character on the basis of his or her external appearance,” the wall text reports.

Speeches also extolled the importance of visuals along with “honesty and humility” — and I thought of how such speeches were early versions of campaign rallies, even when no campaign was going on. An oration delivered by Pliny the Elder, for instance, describes the ideal Roman emperor as someone “possessing military discipline, honesty, humility, and moderation alongside such physical features as height, strength, a handsome countenance, and graying hair.” Marcus Tullius Cicero believed that the countenance and, more specifically, the eyes were windows into a man’s character. “The countenance is the portrait of the soul, and the eyes mark its intention,” Cicero said. And so, eventually, Roman coins included holes to indicate the pupils of the emperor.

I found myself scrutinizing those pupils, and wondering what, if anything, voters saw in Trump’s eyes, until I realized there was something more interesting to think about: the emperor’s relatives. It turns out that Roman emperors also used coins to depict their mothers, spouses, sons and daughters. And female relatives played a special role, then as now. “Though the women did not play an official role in government,” the wall text informs viewers, “their portraits, which express modesty, devotion and family unity, were meant to convey to citizens of the empire how women were supposed to appear and behave.”

It was difficult to read this passage without conjuring up an image of Ivanka Trump, constantly portrayed as the pinnacle of appropriate womanhood, a golden girl, even as her father’s policies threaten women’s health, and as his tweets demean women’s dignity and humanity.

All this is just on one side of the aurei, or golden coins. The other side was used for slogans. Before the billboard on the road, the nightly news or, well, Twitter, the back of a coin was precious real estate. And the Roman emperors used it to hammer home what they wanted to emphasize to their subjects. Topics included a recent conquest, the end of a war or “generic themes like peace, victory, prosperity and security.” The word “generic” made me jump a bit, as I thought “Make America Great Again,” with no details required.

Perhaps what was most chilling about Roman coins viewed on a scorching-hot day in Jerusalem, when I said a silent prayer of thanks for the invention of air conditioning, were the slogans emblazoned near the ceiling of the exhibit in Latin, Hebrew and English. They included “Rome Reborn.”; “Public Security.”; “Victory of the Emperor.”; “Eternal Rome.” And most bizarrely, given what happened to Caesar, “Cheerfulness of the Age.”

The idea of “Rome Reborn” sounded like a precursor of “Make America Great Again.” But the cheerfulness is what gnawed at me. It seemed like the following recent ideas floated by Republican politicians: that Medicaid recipients should get jobs that have health insurance, that the ill could be cured through laughter, or that the sick just need faith. It’s not just the oppressive policies the Trump administration is trying to force down Americans’ throats; it’s the idea we should be happy about it, that we can laugh or pray our way to health.

Maybe what we are being fed is the idea of Roma Aeterna, with a golden image of the emperor in the front, and a slogan alluding to greatness, eternity and, well — godliness — on the back, no matter what the bloody truth is. Rome perfected the emperor process, but the trailblazers included the ancient Egyptians, whose images of men as gods still make museumgoers gasp in admiration, 34 centuries later. Maybe there is something in the human that wants to worship, whether man or God, worthless or worthy, I thought as I prepared to walk back out into this city of holiness, nodding to the coffins on my way out.

“Faces of Power: Roman Gold Coins From the Victor Adda Collection” is on view at The Israel Museum, Jerusalem, through June 2018.