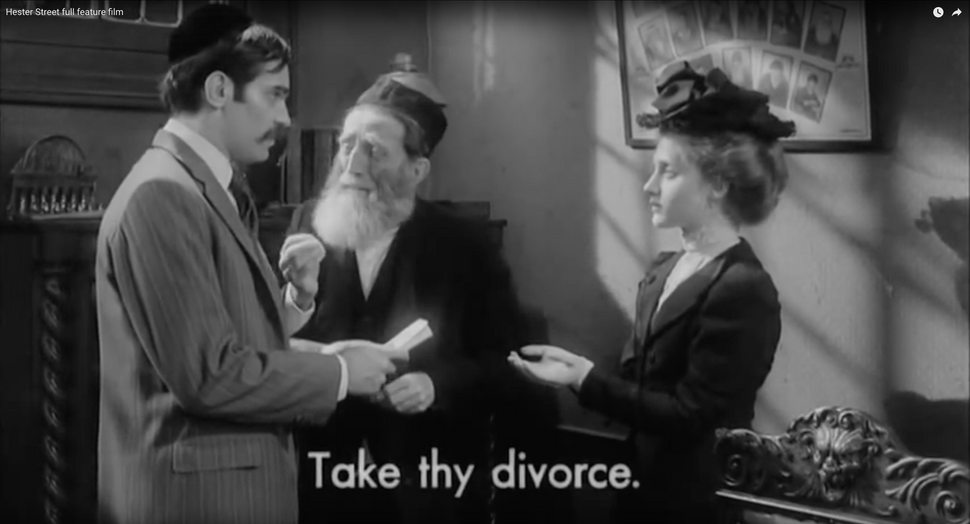 Most Accurate Wedding Sequence:
“Have Gun Will Travel,” ‘A Drop of Blood’ 1961

The length and accuracy of this scene is owed entirely to Shimon Wincelberg, a long-time Hollywood television scriptwriter who worked on everything from “Star Trek” to “Law and Order.” His melodious Ashkenazi chanting is dubbed over the actor’s in this scene—his only speaking role in his many decades in the industry.

The scene conducted in a mixture of Yiddish and Hebrew, is one of the best extended depictions of Jewish ritual ever to appear on the silver screen. The film was inducted into the Library of Congress National Film Registry for its historical significance.

Best Use of Jewish Ritual in a Movie about Aliens:
‘Shema Koleinu,’ “Independence Day” 1996

Jewish ritual is surprisingly frequent in the genre. See also: Hanukkah and shiva rituals on “Babylon 5.”

First appearance of Jewish ritual in an X-Rated film (probably):

Adapted from the Robert Crumb comic strip, synagogue services make a brief appearance. Skeptical of prayer, the movie depicts all the congregants identically: as old dogs in prayer shawls.

Oldest Prayer to Appear on TV:

Michael Ginsberg, the anxiety-ridden Jewish character, makes his debut in this episode. The prayer, which is given by kohanim to congregations and parents to children, is sprung on Ginsberg by his Holocaust-survivor father in a moment of tenderness.

Best Use of Aramaic:

“Berikh Shmei” is traditionally recited when the ark is opened on synagogue mornings. The Lost Ark is opened to excerpts from this prayer—with decidedly more gruesome results.

Kaddish. This ritual is, by leaps and bounds, the most commonly depicted. Unlike the real-life version, the Kaddish of television and movies is almost never said together with other Jews, or anyone else at all.