Looking for God, Notebook in Hand 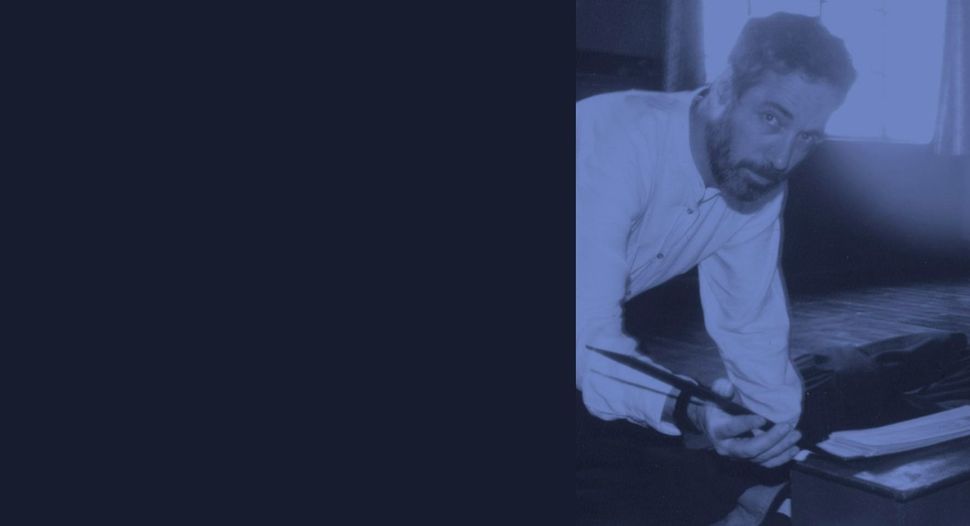 This article was originally published in the Forward on January 2, 1998

One of the more refreshing Jewish books of the ’90s was “The Jew in the Lotus,” Rodger Kamenetz’s account of a meeting between the Dalai Lama and eight American rabbis. This encounter, the first between representatives of the two ancient traditions, was occasioned in part by the Dalai Lama’s desire to know how Judaism had survived in exile and why so many American Jews were practicing Buddhism. As witness and recorder of that meeting, Rodger Kamenetz was transformed from a primarily cultural Jew into a religious seeker. “Stalking Elijah” continues the story by tracing Mr. Kamenetz’s spiritual journey from Passover 1996 to Passover 1997.

A professor of English and director of Judaic studies at Louisiana State University, Mr. Kamenetz has written a highly personal book about “the confusions and struggles in my own life.” (Stalking Elijah: Adventures with Today’s Jewish Mystical Masters HarperSanFrancisco, $22, 370 pages.) Deeply affected by Buddhism, he found himself dissatisfied with his relationship to Judaism as “a carefully preserved nostalgic monument to my immigrant grandparents. I wanted direct experience — to know what is useful and real about Jewish practice.”

Mr. Kamenetz goes in search of this experience by seeking out those he refers to in the subtitle as “Jewish Mystical Masters.” Mr. Kamenetz’s list of mystical masters is a subjective one, including, almost exclusively, men and women ordained or influenced by Rabbi Zalman Schachter-Shalomi, a former Chabad rabbi who has been a seminal figure in the Jewish renewal movement. In Mr. Kamenetz’s words, Rabbi Schachter-Shalomi melded “feminism, ecological awareness, progressive politics, and egalitarianism” with a sort of universalized chasidic mysticism that has become the hallmark of Jewish renewal.

The heart of “Stalking Elijah” is devoted to the almost two weeks Mr. Kamenetz spent in California with Rabbi Jonathan Omer-Man, director of Metivta, a school of Jewish wisdom. Rabbi Omer-Man studied mysticism with Gershom Scholem at Hebrew University, Kabbalah and Jewish meditation in Meah Shearim, and edited Rabbi Adin Steinsaltz’s version of the tales of Rebbe Nachman. After moving from his native England to Israel and living there 26 years, he came to this country in the early ’70s and was ordained by Rabbi Schachter-Shalomi 10 years later. 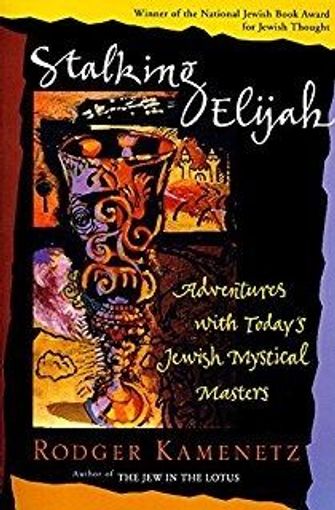 Widely respected for his knowledge of Jewish meditation techniques and Kabbalah, Rabbi Omer-Man also has deep roots in Orthodoxy and is simultaneously admiring and critical of Jewish renewal. “Liturgical prayer [as opposed to prayer of the heart] may be boring, but it’s a spiritual practice,” he says, sounding a welcome cautionary note in the book. “Here I have difficulty with Jewish renewal; they can’t stand boredom. But there is no such thing as a spiritual practice without boredom. Liturgical prayer is a discipline.”

Mr. Kamenetz comes to Rabbi Omer-Man seeking a Jewish talisman, some almost-magic words of meditation that will bring him to a state of spiritual enlightenment with a Jewish accent. The journal of Mr. Kamenetz’s reflections, as well as his conversations with the rabbi and some of his followers, comprise the body of the book. “There’s no point in seeing Jewish meditation, or any meditation, as a panacea,” he writes, because “the ego” merely seeks “levels of spiritual achievement as if they were mental BMWs.” Rather, one must “break set, break habits, work on purification, purification, purification — slowly refine oneself, break down old associations, and, as with the Shema meditation, move away from old mental grooves. This difficult venture requires patience, practice, purification.” It is not that this or anything herein is terribly wrong. It isn’t, and anyone familiar with mystical literature and/or practice will also recognize that nothing here is particularly original either. After a while, all the intellectualizing becomes tedious, and Mr. Kamenetz’s earnestness and spiritual ambition can be exhausting.

This brings me to the heart of my dilemma about the book. I like Mr. Kamenetz as he presents himself in his book and respect his integrity and sincerity. From an objective standpoint, I like “Stalking Elijah” and recommend it to anyone seeking a guide to Jewish mysticism in the renewal movement and some of the important figures of that movement. I also respect the openness and free emotional expression Jewish renewal adds to liberal Judaism.

However, subjectively, I am uneasy with the almost casual familiarity with which mysticism — the direct experience of God — and Kabbalah are approached. Historically, mysticism has been the hidden substrata of Judaism, present but not widely talked about. Today it seems not the final but the first door through which searching Jews are ushered in their quest for religious life.

“Stalking Elijah” represents too small a sampling of American Judaism to seem truly emblematic. The book fails to ask if there are “Jewish mystical masters” among congregational rabbis or Jewish laity. One wonders what rabbis like Lawrence Kushner, David Wolpe or Harold Schulweiss, academics like Moshe Idel or David Blumenthal, all of whom have written on Jewish mysticism in striking and different ways, not to mention any number of Bratslaver chasidim, would have had to say.

It is unfortunate that Mr. Kamenetz chooses to put on display the troubled lives of some of his “mystical masters.” When he reveals that Rabbi Omer-Man and his wife, Rabbi Judith Halevy, separated during the time he was there, his intent seems to be to show their humanity. However, the result is to make one wonder of what value it is to know how to unite with God if the person on the other side of the Shabbat table is an unendurable enigma? I don’t wish to sound unsympathetic, neither do I expect perfection from anyone. However, if an author chooses to reveal intimate details of his teachers’ private lives, then he cannot hold them up as models with one hand without helping the reader understand how their personal failures are to be reconciled with their spiritual practice. I am sorry Mr. Kamenetz involved readers in the intimate lives of these two people, presumably with their approval. However, the intrusion of the private into the public realm is one characteristic of the ’90s and Jewish renewal.

The personal mystical experience has traditionally been grounded in the encounter with the impersonal aspect of the Divine. In the synagogue service and in the synagogue community — scarcely mentioned in “Stalking Elijah” — one is reminded that however intense one’s personal experience of the Divine, God is also and forever beyond our ability to grasp. In this way, we remain grounded in finiteness and are not seduced into hubris, the dangerous underside of the personal mystical experience. A paradox of Jewish renewal is that many of its adherents describe themselves as neo-chasidic. They have taken the melody and ecstatic style of worship from chasidism but not the strict adherence to Jewish law. Ecstasy without parameters and discipline easily becomes emotional self-indulgence.

“Stalking Elijah” does incorporate some of this criticism, and Mr. Kamenetz’s mystics often acknowledge the problem of mystical solutions to practical religious life — witness Rabbi Omer-Man’s critique of the “neo-chasidic” aversion to religious discipline mentioned above. And Rabbi Schachter-Shalomi sees clearly that Jewish renewal has to face the problem of “what to do about halakhah” and is trying to develop a “psycho-halakhic process,” and examine what function halacha fulfilled “in an earlier time” and how best to “fulfill that function in our current situation.” With all its talk of mysticism, “Stalking Elijah” is a spiritually intoxicating book but an imbalanced one. Absent from it are the more ordinary Jews who have probably never experienced the Divine but, despite that, are there in synagogue every Shabbat. They pay their dues and do the drudge work on synagogue boards and committees. Too great an emphasis on the mystical can create Jews addicted to a spiritual high. I do not think this is true of Mr. Kamenetz, who finally realizes that “the search for a Jewish meditation doesn’t have to involve complex techniques. It can be as simple as saying one blessing a day over bread. Judaism is full of such meditative treasures.” He acknowledges that he “found gold in basic Jewish texts, prayers, and practices. The trick is to bring them inward, to take them to heart.” However, I think the way Mr. Kamenetz writes about Jewish mysticism may contribute to the ethereal drift of the Jewish renewal movement.

In Tractate Brachot [62a] we are told that R. Kahana hid under Rav’s bed. From there he heard Rav talking and joking with his (Rav’s) wife “and doing what he required. He said to him: One would think that Abba’s mouth had never sipped the dish before! [R. Kahana held Rav in such high esteem that he called him Abba, i.e., father]. He [Rav] said to him: Kahana, are you here? Get out, because it is rude, [i.e., it is not the way of the world]. Kahana replied: It is a matter of Torah, and I require to learn.” Now that’s what I call mysticism.

Looking for God, Notebook in Hand