‘The Cakemaker’ Finds Eroticism In Baking And Grief 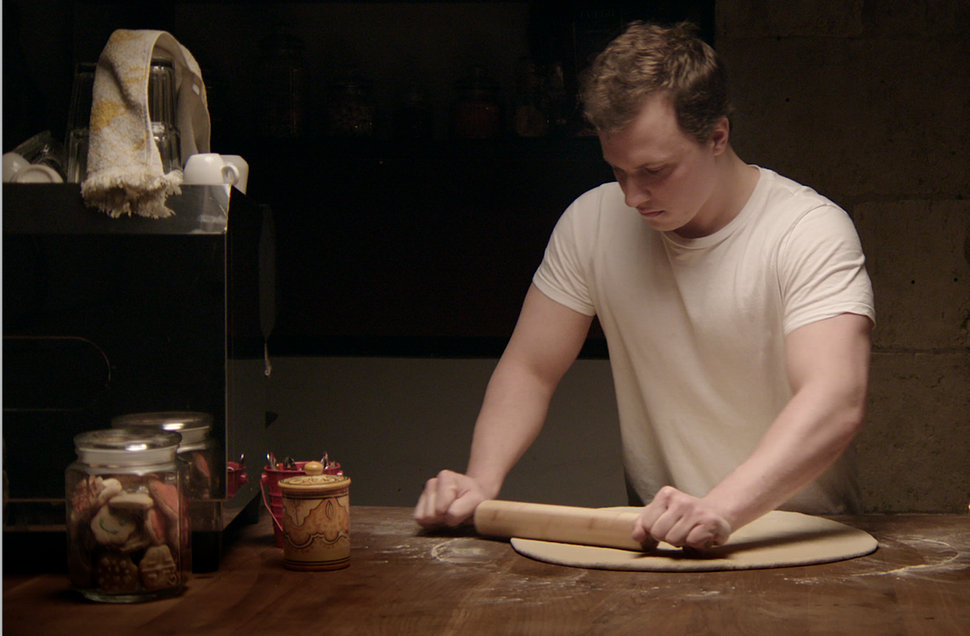 A still from “The Cakemaker” Image by Strand Releasing

Set in Berlin and Jerusalem, “The Cakemaker” is just another boy-meets-boy, boy-loses-boy, boy-meets-boy’s-widow, widow-falls-for-boy story. In other words, it’s unlike anything you’re likely to see this year, and an unflinching, ravishing look at a broken romantic triangle.

In the film, married-with-kid Israeli businessman Oren, a frequent visitor to Berlin, falls for German baker Thomas — and his cookies. After Oren dies in a car crash, a bereft Thomas travels to Jerusalem and insinuates himself into the life of Oren’s cafe-owning widow. Emotions reach operatic proportions, but the cakes really steal the show — I actually salivated at some of the baking scenes.

“The Cakemaker” is the first feature film for Ofir Raul Graizer, a Berlin-based Israeli who’s also published a cookbook and teaches cooking. As “The Cakemaker” opens in limited release this week, The Forward ambushed him just before bedtime in Berlin — afternoon NYC time.

With the kinds of characters and situations you present, it’s easy to see them as symbols. Was that your intention?

It was my intention to create this intention and then break it. Clearly, once I place characters in these contexts so suddenly they become representatives. But I did that in order to break these definitions, to say it is not the issue. This is not about Israeli or German or gay or straight or Jewish or Christian. It is about much simpler, basic things like love, loss, longing and the need for comfort. These emotions surpass any category of identity, and these characters don’t want to be defined.

How much of “The Cakemaker” reflects your own life beyond obvious connections like your connections to Israel and Germany?

How do you make a movie in multiple locations for $180K?

You make sure all the locations are close to each other so we don’t need to pay a lot for transportation… Seriously, the truth is that we actually shot the film with half of that – $90K. The other half we got when we had a rough cut. So it was really a miracle of a movie. We had a team of volunteers, actors who worked for lower fees, a great energy and a director-producer – myself — who moved to Jerusalem four months before the shoot and had every shot in mind. We were super-organized and planned, had a small crew, and a lot of passion. It just worked. It had to.

The food and baking scenes almost pornographic. Is it sublimation for all the repressed emotions? And who did the actual baking?

You’ve said Jerusalem’s your favorite Israeli city. I don’t often hear that from Israelis in creative fields. Why?

I think that the problem with Jerusalem for many Israelis mostly is what they see on the surface, which is religion, politics and division. Those are some of the reasons I love this city — its complexity; it’s in your face. I prefer that to pretending that Israel is a liberal, free, and open place. It’s not. Adding to that is the fact that the city is plain beautiful, amazing architecture, incredible food, a beautiful tapestry of people, and some of the most fascinating places in the Holy Land. I love it.

Your film doesn’t seem to judge anyone — Oren for having affair, Thomas for lying, Anat for falling for him. For you, is there a hero in the film, or a villain?

I try not think in terms like hero and villain. It’s the wrong genre for it. I don’t judge any of these people and not only that, I also love them all very, very much.

I am developing two scripts. One is set in Israel and talks about a man who comes back to his homeland after 10 years of absence to bury his father and finds himself lingering in the country much more than he had planned, finding it a completely different place than he remembered. The other I’m developing in Italy and it’s about a clerk who develops an obsession about a strange painting. I am now writing these two projects as well as being involved in all kind of other things. I am also finalizing a cookbook that will be published in Germany in September. Busy busy. And I want more.

‘The Cakemaker’ Finds Eroticism In Baking And Grief