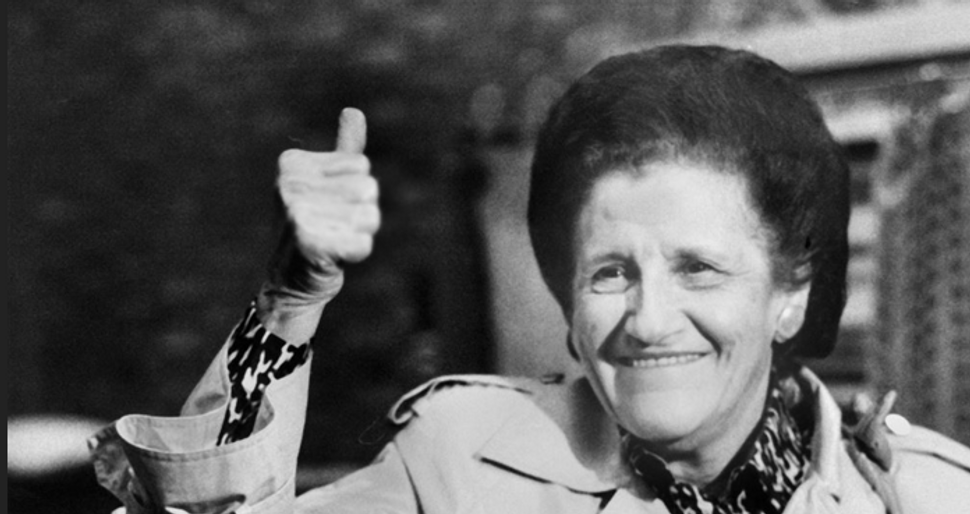 Pittsburgh’s Jewish history is receiving renewed attention in the wake of the October 28 shooting at the Tree of Life synagogue. But while we mourn, we also acknowledge that there is much to celebrate about the community’s past. Did you know, for instance, that the first female Mayor of Pittsburgh was also Jewish?*

Sophie Masloff, born Sophie Friedman to a poor, Yiddish-speaking immigrant family in Pittsburgh’s Hill District, served as the city’s mayor from 1988 to 1994, [The New York Times wrote in her obituary from 2014. It wasn’t a role she ran for, but one she inherited by writ of the City Charter following the unexpected death of Mayor Richard S. Caliguiri. As then-President of the City Council, Masloff, who was 70 at the time, was next in line for the job and was elevated to interim mayor.

Masloff, whose father died when she was two and whose mother made ends meet rolling cigars in a factory, had only a high school education and worked most of her life as a county court clerk. Though, as a Politico article on her legacy notes, Masloff made her way up the ranks of local Democratic politics alongside her lifelong friend and ally Rita Wilson Kane, she wasn’t groomed for the city’s top job and it showed. She was, by her own description an old Jewish grandmother, and as The Times obituary reports, for an ethnic, working-class town like Pittsburgh that presentation played well.

But in the 1989 mayoral race, she got tough, losing the grandmother act after her opponents derided her for her poor management skills. She encountered stiff competition in the primary, facing five Democratic opponents and lacking the endorsement of many of the major papers. She managed to win the nomination anyway, running unopposed in the general election and securing 4 more years as mayor.

Masloff was known for her regular use of the Pittsburgh pronoun “Yinz” and many intentional malapropisms and silly jokes, often butchering the names of visiting bands — Bruce Springsteen became “Bruce Bedspring”; The Grateful Dead: “The Dreadful Dead”; The Who: “The How.” Her patter was known as “Sophie Speak” and became her trademark, along with some signature pieces of legislation.

During her tenure, Masloff oversaw a significant advancement in Pittsburgh’s civil rights, signing a law that barred businesses and landlords from discriminating against gays and lesbians.

As Pittsburgh Post-Gazette Politics Editor Jim O’Toole reported in Politico, even in her final months in office, Masloff proved she could play hardball. She defied the powerful public transit commissioner by intervening in a strike that would have crippled the city.

At the time of her death, Pittsburgh’s current mayor Bill Peduto told the Pittsburgh Post-Gazzette Masloff was “the embodiment of our city…. She was kind, she was compassionate, she loved our city, but she was tough.” Her name made its way into the infrastructure of the only town she’d ever called home when on her 90th birthday in 2007, a corner of two major streets near PNC Park baseball stadium was dubbed “Sophie Masloff Way.” Fitting for the tough but approachable mayor. It was often her way or the highway.

By the time she stepped down as mayor in 1994, at the age of 76, refusing to run for another term, she had effectively tightened Pittsburgh’s belt to keep the city livable, employing tough measures to lead the one-time steel town through a period of urban decay and sudden economic change. Not bad for a Jewish grandmother.

Correction: This article originally stated that Masloff was, as is widely-reported, the first Jewish mayor of Pittsburgh. But new evidence suggests otherwise.