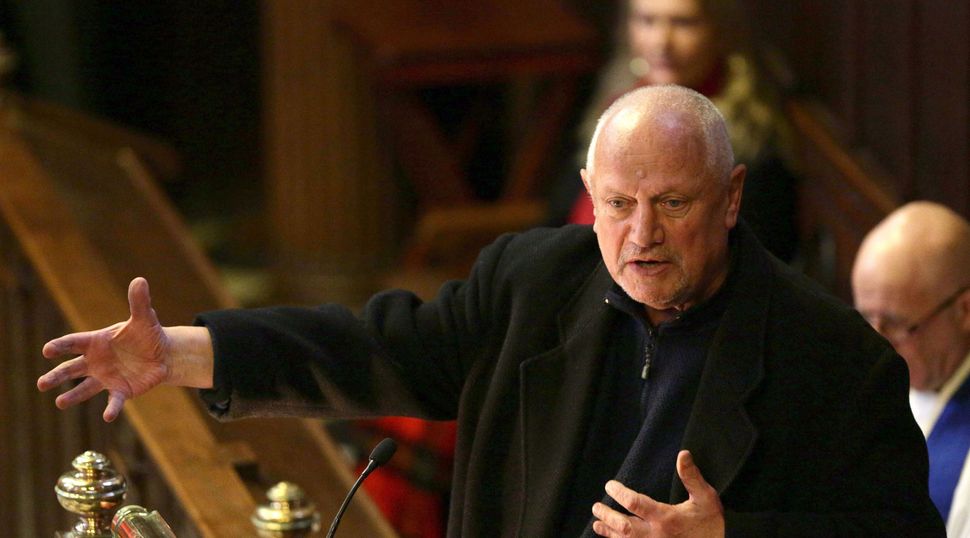 Actor and playwright Steven Berkoff in 2014. Image by Getty Images/AFP/Pool

Actor and playwright Steven Berkoff wants to stage and star in a production of “Harvey.” No, not the 1944 Mary Chase comedy about an invisible six-foot-tall rabbit, but a new, one-act, one-man show about the very visible movie mogul and alleged sex offender Harvey Weinstein.

“I like evil people,” Berkoff said in a November 20 profile for The Guardian “I’m like a surgeon who is happiest when working with a very diseased body.” The 81-year-old made his name as an actor playing sadistic villains in films like “Octopussy” and “Rambo” and as a playwright for his 1975 verse play “East” about his coming of age on the hardscrabble East End of London. Now Berkoff wants to tackle the challenge of Weinstein’s pernicious power plays as both a writer and performer – that is if any theater company in England will let him.

Even with the ouster of luminaries of the British theater for misconduct, Berkoff seemed confident his play, now a fifteen-page soliloquy, will have its day on the West End.

“#MeToo is just a reaction and, as with all reactions, it tips over,” Berkoff told The Guardian. “It comes from a very good source, but it attracts the elements who have, you know, minor disgruntlements and minor little feelings that they’ve been disrespected. It tilts too heavily that way. But it will tip back.”

Berkoff, the son of Jewish immigrants, who has railed against British anti-Semitism, did show some concerns about painting Weinstein as something of an anti-Semitic prop. The actor-playwright said he’d depict the disgraced producer with a measure of sympathy.

“It’s locked in the brains,” Berkoff said of England’s version of the oldest hatred. “We’re brainwashed with so much information that Jews are often demonized. Anti-semitism is massively on the rise everywhere, even in places you wouldn’t expect it – like the Labour party. It’s awful.”

The style of Berkoff’s “Harvey” described by him as “dense text” will likely play to the “epic” style of drama he feels English theaters are now overlooking in favor of naturalism.

Berkoff sat for the session with The Guardian after wrapping the narration for a film adaptation of Goethe’s “Faust,” and indicated the German author’s lofty prose is something he’d like to see emulated more. Maybe some deal with the devil will be involved when and if “Harvey” gets the go-ahead. Or maybe Harvey’s the devil making the deal.

“This is a creature who offers freedom, offers to change your life, because once you hear that magic word ‘Action!’” Berkoff said of Weinstein’s Mephistophelian manipulations. “You’ll be changed from this small, simpering B-movie actress. Suddenly on the screen, you’re touching magic, you become immortal. He’s offering that for just a few minutes in the shower.”

Yikes. Maybe Berkoff should stick to evil Soviets and mean army men. This one’s a bit too creepy for us.