If We Are Really Going To Tackle Jewish Poverty, Here Are The Questions We Need To Ask 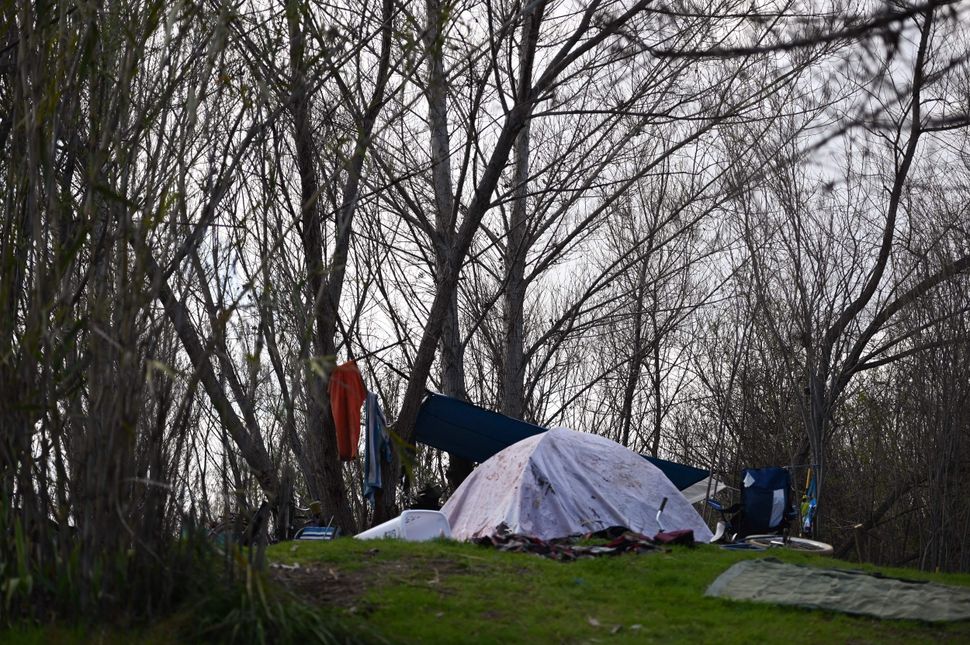 How the Homeless are coping in California Image by Getty Images

If the American Jewish community seriously confronted the persistence of Jewish poverty, it could look like this:

More than 200 people from 19 states and the District of Columbia gathered on March 19 at a large San Francisco hotel for a convening sponsored by the Harry and Jeanette Weinberg Foundation to examine why a surprising number of our Jewish brethren struggle with poverty and to discuss what can be done about it. Already, one outcome is the formation of an affinity group that will begin meeting in June to create a national agenda.

“I would not give 2 cents to a Haredi charity. They choose their poverty. They want to study all day and not work for a living? Then suffer poverty. I’d like to hike in the woods every day, but I go to work.

“A 10 year old child in 1945 is now 84 years old. The Holocaust survivor segment of Jewish Poverty is tragic, but it’s about to become non-existent.

“Of course there are Jews who are poor, and of course we should help them, particularly the elderly and children (non Haredi). But relatively speaking there is not a significant Jewish poverty problem.”

That came from a Forward reader in response to my essay adapted from a paper I contributed to the convening on why we don’t talk about Jewish poverty — and why we should. I want to believe that this reader’s loathsome and ignorant views are hardly common, and that the spirit and determination filling that San Francisco meeting room were far more representative of Jewish values and commitment.

But if we are going to tackle the issue of Jewish poverty, and we must, we also need to examine the prejudices and skewed priorities that have gotten us to this point in the first place. American Jews are among the wealthiest, most well educated and most respected minorities in the country, and yet 16 to 20% of us live at or below 150% of the federal poverty line, and 7% of Jewish households earn less than $15,000 a year.

Worse, some indicators show that the trend lines are going in the wrong direction. The percentage of Jews who are poor in New York City, the epicenter of Jewish poverty, has actually doubled in the last 20 years.

And while my loathsome letter writer is correct — poverty is high among certain segments of the ultra-Orthodox community, due in part to lifestyle and religious choices — most poor Jews don’t fit into that category. In New York, for instance, about 8% of poor Jews are poor because they are disabled and unable to work. In Boston, the most potent indicators for Jewish poverty are mental illness and homelessness. Jewish women are particularly vulnerable to economic security because of divorce, trauma and abuse, and gender discrimination in the workplace — conditions that are sadly found in every segment of our community.

“Jewish poverty is not just an issue for the Jewish community. It should be an issue for all our communities,” Wes Moore, CEO of Robin Hood, one of the nation’s largest anti-poverty organizations, said at the convening. “These are not exclusive issues for one group to deal with; they go to the heart of our common humanity.”

“We are at historic unemployment, but what hasn’t moved? The poverty level,” he continued. “Our proximity to poverty is much closer than any of us realize.”

Jews are not immune from the disheartening broader economic trends that leave so many struggling even at a time of relative peace and prosperity. Growing poverty among the working poor. Growing numbers of people who cycle in and out of poverty because the porous safety net can hardly catch them all. The scourge of rising income inequality.

That said, there was general agreement among the policy experts at the convening that we need more and better data to understand the extent and complexion of Jewish poverty. There are few national numbers, and local community efforts to survey the poor often use different data sets and definitions, making comparisons difficult.

If you value what you measure, and measure what you value, then this glaring deficiency says a lot about our Jewish values right now. We constantly monitor anti-Semitism and campus anti-Zionism. What about conducting serious (yes, it will be expensive) national research on the poor and needy among us?

And as we study the broader landscape, I hope we can engage in some introspection and study ourselves, too. At a breakout session I conducted at the convening, I found a receptive group of people willing to ask uncomfortable questions. Do we ignore Jewish poverty because it challenges our self-identity as a “model minority?” Do we need the equivalent of a #MeToo moment on this issue, where we create safe spaces so that the pain and hardship many endure silently can finally be revealed?

Who do we allow to be invisible? What are the real threats to the Jewish future?

And, importantly, how do we bring the voices of the Jewish poor into this conversation, to elevate their needs and concerns while respecting their dignity?

I would add that there is a political dimension to this issue that we can’t ignore, either. Owning up to the existence and extent of Jewish poverty requires us to recognize that not all Jews are privileged. So far, there is no data indicating that Jews of color are more likely to be poor than other Jews; that means the racial component of American poverty does not necessarily apply in our community.

But if many poor Jews are like other poor Americans, then we must work harder to identify and alleviate the root causes of poverty that transcend race, religion and ethnicity. The philanthropic potential in that convening room was enormous, and there was an admirable sense that a concerted effort to share best practices and build on existing success could really make a difference.

It cannot stop there, however. As Wes Moore reminded, “we must recognize the economic injustice that makes philanthropy necessary.”

If We Are Really Going To Tackle Jewish Poverty, Here Are The Questions We Need To Ask