The Gift Nadine Gordimer Gave to Me 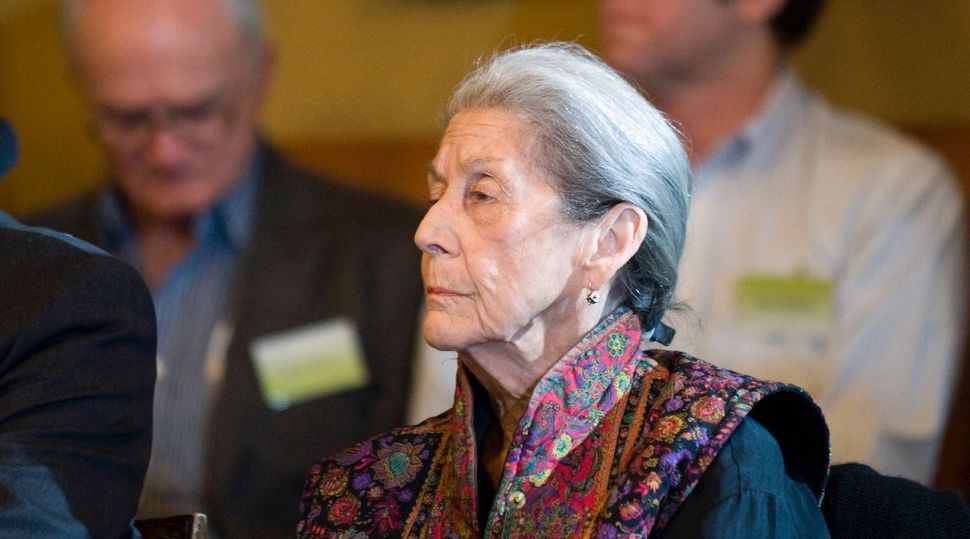 July’s Author: Nadine Gordimer passed away this month at the age of 90. Image by Getty Images

Editor’s Note: On this date in 1991, the author Nadine Gordimer received the Nobel Prize for Literature. To commemorate that anniversary, we return to this essay by National Jewish Book Award-winning author Kenneth Bonert, written on the occasion of Gordimer’s passing in 2014.

There is one quality that is perhaps more important to a writer than any other. Nadine Gordimer not only possessed it in abundance but was able to grant a measure of it to others, as she did to me when I was struggling to become a novelist, a gesture I’ll always be grateful for.

Gordimer, the winner of the Nobel Prize for Literature in 1991, authored fifteen novels and a dozen short story collections. She was born into a bleak little mining town not far from my hometown of Johannesburg. Her father, a watchmaker, had emigrated from the Yiddish shtetls of Lithuania, the familiar pattern at the root of most South African Jewish families (my own included). Her mother, also Jewish, was from England.

Gordimer led an extraordinarily sheltered and isolated early life. Her mother, bizarrely, took her permanently out of school at age eleven on a false health scare. Aside from visits to a tutor, she would thereafter spend the rest of her childhood and youth at home with books. Her schoolmates were Dickens and Woolf, Upton Sinclair, D.H. Lawrence. No doubt this cosseted, hothouse existence with its remarkable freedoms and attendant isolation, helps to explain her ferociously preternatural development as a writer. By twenty-eight, she’d put out a volume of stories and published in The New Yorker; and when her first novel appeared (she was barely thirty), it already carried the full weight of her mature style and lasting preoccupations.

The obituaries that have followed her passing invariably describe her as foremost an anti-apartheid writer. In the hypersensitive political culture that we all live in today, perhaps this stands as a supreme compliment. But for me, Gordimer’s achievements have always been primarily aesthetic.

She was one of those writers, like Hemingway, who developed a distinctly recognizable prose style of her own, and stayed with it through all of her books. Her tone was never comic or frivolous, her literary mission was the serious, sober, detailed recording of contemporary life in South Africa as she saw and felt it. She kept a bust of Balzac on her bookshelf: the great French writer had set himself the task of describing nineteenth-century French society from top to bottom, using many shorter novels with different characters rather than a single vast work. Gordimer’s own oeuvre seems to try for a similar achievement, with a proliferation of short or average-length novels and story collections, each piece focused intently on issues of current concern. She was not interested, generally, in writing epics or historical novels or fantastical works. With some few experimental exceptions, she tried only to record her time and place with the X-rays of her art. She was half poet, half reporter.

Her sentences are often lush and groping, with a Homeric quality of backing into their subjects, often poised on the edge of awkwardness as they strain to probe their twisting way as far as they can into the minds of the characters. Sometimes they’re sheened with a pithy, abstract quality in need of a second reading to unfold the meaning. Reflecting, for example, on the necessity of lying, an anti-apartheid activist in the 1994 novel “None to Accompany Me” rationalizes: “These were the only ways to defend at least something of the truth against the ultimate lie, the only way to defend the principle of life struggling against death, which is the ultimate, forgotten etymology, not to be found in any dictionary or political speech, of that embarrassing word, freedom.”

But there is also clarity and lyricism. From the 1981 novel, “July’s People”: “… the buttock-fold in the trees indicated the river … Like clouds the savannah bush formed and re-formed under the changes of light, moved or gave the impression of being moved past by the travelling eye; silent and ashy green as mould spread and always spreading, rolling out under the sky before her … Space; so confining in its immensity her children did not know it was there.”

Overall, her drifting, association-making prose has a way of enveloping its characters in an authoritative aura of reality. The intensely observed details ring true, and are there all the way down to the roots, whether personal or societal. It’s the kind of work that strains eagerly to convey, from every possible angle, the fullness of the experience of living. Such dense, profound language also had the effect, for me, of uncovering the importance in the banalities of South African life. What might have felt like suffocating provincialism was transformed through the alchemy of her language into an uncovered wealth of human experience. It was found in the shadow presence of Africa and Africans — the horrors they endured quietly subsumed beneath the daily lives of the colonizing class of which she was a part. In writing this way she gave her (and my) hometown a vital existence within world literature.

Her insistent focus on writing about the now and here was also the kind of literary mission that forces a writer out into the world. Her close friendship with Nelson Mandela was just one signifier of the breadth of her contacts. Perhaps having lived her childhood in such isolation, her artistic approach became a reaction against it, her work often seems to yearn toward a place within a sympathetic group.

Most of her major books tell not so much the story of an individual but of that person’s relationship with a small, often virtuous, clique of like-minded friends. In her first novel, it is a group of white, left-liberal artist types centered around Johannesburg’s Wits university; in her last novel it’s old comrades of the anti-apartheid struggle, black and white, and their neighbours in a new suburban Johannesburg development who are young, gay, of course multiracial.

Yet interestingly, among her novel’s central cliques there was never a Jewish one. For all of her Jewish heritage and personal connections (not only were her parents and family Jews, so were both of her husbands), overt signs of Jewishness are largely absent from her body of work. It’s impossible to guess from the books alone that Gordimer was Jewish; and it would be easy to assume the contrary, since whenever Jews do appear in her fiction, they tend to be seen through the eyes of a non-Jew, looking in with almost anthropological fascination onto an alien culture.

For a writer of her acute sensitivities and breadth of interest, this seems a peculiar absence. Perhaps to write from inside the identity that her own flesh and blood carried would have been too intimate; her work with its cool detachment, its abstract meditations, seemed to need a certain distance in order to make its careful observations.

It’s worth noting, therefore, that her final novel, “No Time Like the Present” (2012) features a half-Jewish character, married to a Zulu woman, who is drawn into meditating on his Jewish background at the “spectacle” of a bar mitzvah for his nephew. He cannot understand his brother’s impulse towards Judaism for his son. His brother answers him: “It isn’t enough to be black or white, finish and klaar, the way it was in the bad old days—you belong somehow to something closer … more real, you can, it’s possible.” (Finish and klaar means something like, over and done with in South African vernacular.) 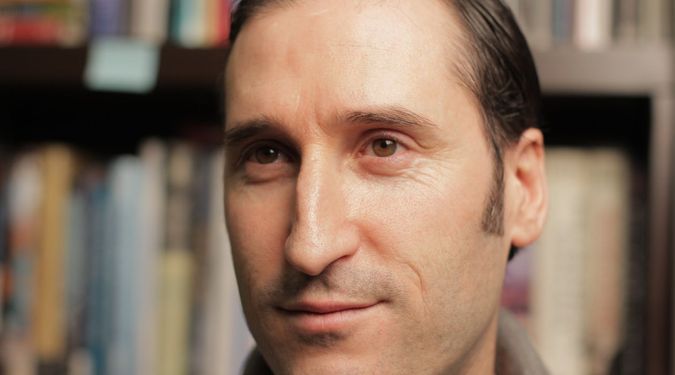 Gordimer’s Heir: Kenneth Bonert is the author of the debut novel “The Lion Seeker.” Image by Martyna Starosta

In post-apartheid South Africa, where all the old categories matter less and less, people are embracing new identities, looking for new certainties. Maybe in this environment, at the end of her life, Gordimer, still an atheist, was also beginning to write about whatever impulses had pushed her fiction away from preoccupations with her own tribe. There is something that strikes me as fundamentally healthy about writing fiction in the way that Gordimer did, pursuing work that forced her out of the study and into engagement with the world around her. But this approach also carries the danger of being corrupted or tempted by that world. If a side is too overtly taken, then propaganda and not literature is produced.

Gordimer was a member of the African National Congress, and helped to edit Mandela’s famous “I am prepared to die” speech. In her lifetime she took many risks to aid dissidents, helping to hide and transport them, carrying messages. Yet on the other hand she was never imprisoned or tortured as others were. To the contrary, her life during apartheid was very comfortable. She lived in a beautiful home, with black servants, in wealthy Parktown, in Johannesburg’s leafy northern suburbs, not far from where I grew up. This was a precarious position to be in and to maintain for as long as she did. She was able to do so because of that most vital quality for a writer which I alluded to at the start.

Gordimer believed above all in the gift of innate talent, and that the disciplined expression of that talent was close to a sacred duty. Her belief in her own voice gave her an absolute self-confidence without which no great writer can adequately function. It’s a self-confidence that shines like a bright light through all of her work, enabling her to stretch the boundaries of empathy and convincingly, unhesitatingly, enter the minds of her fellow South Africans, rich or poor, black or white.

Some years ago, I came across a family photo of my late uncle’s in which a very young Gordimer featured. On a whim, I wrote to Gordimer about it, also mentioning my literary aspirations. She was kind enough to respond with a typewritten letter that included these words, “I can tell you are indeed a writer … You may even discover for us a few missed truths; I have limitless faith in the power of the word!”

For a writer of her stature to take the time to send such lines of encouragement and recognition to me was a gift of profound value, struggling as I was then to even finish writing a novel, let alone publishing one. It was the certainty in her judgements that made her great; only a little of it was needed to help me find some of my own.

That Nadine Gordimer has died in July is a strange coincidence — “July’s People” is one of her most famous novels. It seems a kind of sign, pointing us away from her physical passing and back to her remarkable and enduring legacy, back to the written words that she so passionately believed in, words that will outlive any crumbling political system, words that we know will last as long as there are eyes still left to read them.

The Gift Nadine Gordimer Gave to Me