The First Yiddish Play Staged In America Gets A Timely Encore 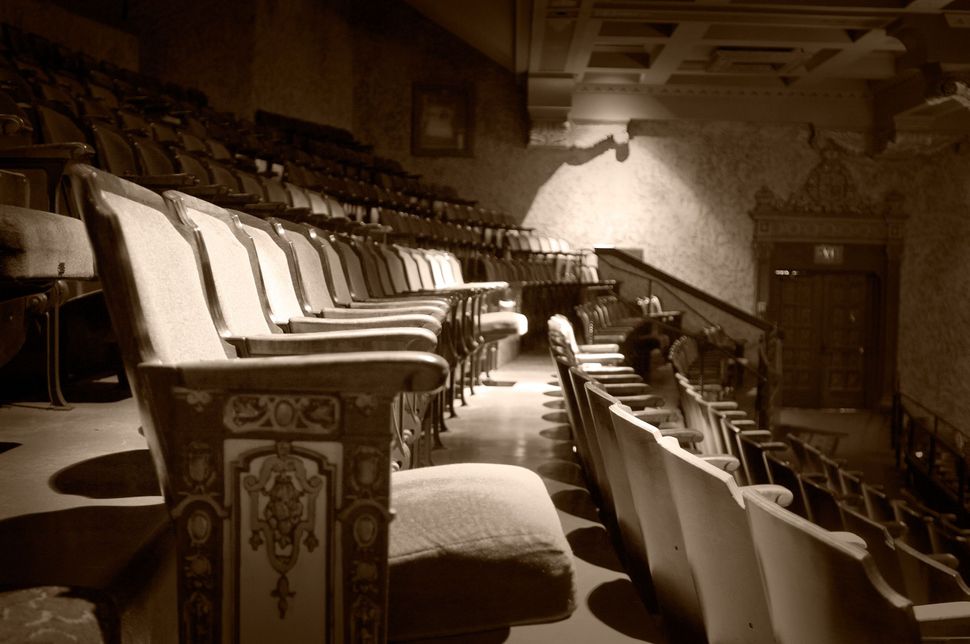 When Boris Thomashefsky arrived in New York Harbor in 1881, before the Statue of Liberty — and before Ellis Island – he carried with him the spirit of a born performer. But he had not yet found an outlet for his talents; neither, for that matter, had America. Within a year of his immigration, things changed for him, and for his adoptive country.

Toiling away in a cigarette factory, the teenage Thomashefsky, who had never been to the theater in his native Ukraine, learned the songs of the Yiddish stage from his fellow workers. He was not long for that job. In 1882, when he was 14, he persuaded a Bowery beer hall to produce Avrom Goldfaden’s operetta “Di Kishefmakherin,” (“The Sorceress”). The play, about a young woman, expelled by her evil stepmother with the aid of a witch, was actually a transfer of a British production from a London-based company. But with that troupe performing on the Bowery, Thomashefsky, who would soon become the leading matinee idol of Second Avenue, brought America its first Yiddish play.

Almost 140 years after that historic production, the National Yiddish Theatre Folksbiene is reviving the show for a run beginning December 1.

The new production, which premieres at the Museum of Jewish Heritage, is accurately more of a restoration than a revival. It is the first product of the Folksbiene’s Global Restoration project. Motl Didner, the operetta’s director and the associate artistic director of the Folksbiene, started digging, alongside Folksbiene artistic director Zalmen Mlotek, for the original libretto and orchestrations in the YIVO archive in 2017.

They found some of the needed pages in the Vilna collection, a cache of documents rescued by the famous “Paper Brigade” in that city’s ghetto. Under threat from the Nazis, these caretakers of European Jewish history found the sheet music significant enough to risk their lives to hide it.

“The Sorceress” was a natural first production for the Folksbiene’s initiative, much as it was an easy pick for Thomashefsky’s first go at producing.

“Because it was one of Goldfaden’s works, it gave it a name and gave it a degree of professionalism and coherency as a dramatic work,” said Mikhl Yashinsky, a Yiddishist who plays the title role of Bobe Yakhne the sorceress. “A lot of Yiddish theater before his time was all over the place, and he created of it something very professional and a very distinct art form.”

Goldfaden was famously prolific, writing for and running the first professional Yiddish theater troupe, based in Romania. But “The Sorceress” is special among his works. It tells a familiar, fairy tale-inflected story with lovers, a traveling merchant and an old crone with a clutch of cauldron-mixing apprentices.

While the piece hasn’t been staged on this scale and with these orchestration in America for over 80 years, “The Sorceress” produced cultural touchstones that are still present in Yiddishkeit. If you’ve ever sung the Yiddish happy birthday song, you have “The Sorceress” to thank. Goldfaden penned the tune for the play, a full 15 years before its English equivalent.

Didner told me that despite the story’s appealing fantasy trappings, Goldfaden was commenting on current events when he wrote it in 1878.

“It was actually quite popular for Jews to go to tarot card-readers and fortune tellers and tea leaf-readers,” Didner said of the era and place in which the operetta was first performed. “This was written as a cautionary tale not to engage with people like that, because they were ultimately manipulating you out of your money. They could be dangerous, because they took advantage of people who believe in such things.’”

The play bears witness to the dangers.

Bobe Yakhne arranges for the ingenue, Mirele, to be sent away to the Ottoman Empire, where she becomes the chanteuse slave of an organ grinder.

To contemporary audiences, this narrative detour may seem uncomfortably orientalist, but Didner notes that in Goldfaden’s time, the plot point was not so far-fetched. The Russo-Turkish War was raging, and the Ottomans took many Eastern European territories (and Eastern European people) hostage. Like the Grimm fairy tales that informed Goldfaden, “The Sorceress” has some patriarchal lessons. Namely, don’t go to witch doctors or you may end up the victim of human trafficking.

“I don’t know if he accomplishes what he wants to do if his message is ‘Keep away from these people,’” Yashinsky said. “Because he does make Di Kishefmakherin such an interesting attractive sort of character, although very base and evil.”

Part of Bobe Yakhne’s charisma comes from the many legendary performers who played her (almost all of them men). Yashinsky, who currently sports a voluminous beard for his turn in the Off-Broadway run of the Yiddish “Fiddler on the Roof” is reprising the role following the 2017 concert version. Don’t worry, he will shave just before he enters tech rehearsals.

While the young Thomashefsky is rumored to have played Mirele in that first American production (after the original actress got sick), he later went on to embody the titular part himself. By that point, he was addressing an immigrant community with different concerns than Goldfaden’s audience — although a great number of them still visited witchy women like the Sorceress on the Lower East Side, where they were sometimes referred to colloquially as “Bobe Yakhnes.”

But the message, whether in 19th century Romania, Amerike the Golden Land or in today’s United States, stands the test of time.

“It’s a Jewish fairy tale,” Didner said. “In other European cultures’ fairy tales, the children push the witch into the oven or the woodsman comes in and cuts open the wolf’s stomach. Here it’s not the protagonists who are committing an act of violence to bring about the end; the bad guys suffer from the fate that they wrote for themselves in a way.”

This Jewish poetic justice, or karma, Didner offered, is playing out in the headlines as we speak.

“Today I think the ‘He who digs a grave falls in it himself’ message is very resonant,” Didner said, referring to lyrics from the closing number. “I think we have a bit of ongoing national news that has to do with somebody who started a scandal by looking for dirt on their opponent. They were looking to dig the grave, and we’ll see if they really fall in it.”

_PJ Grisar is the Forward’s culture fellow. He can be reached at [email protected]

The First Yiddish Play Staged In America Gets A Timely Encore