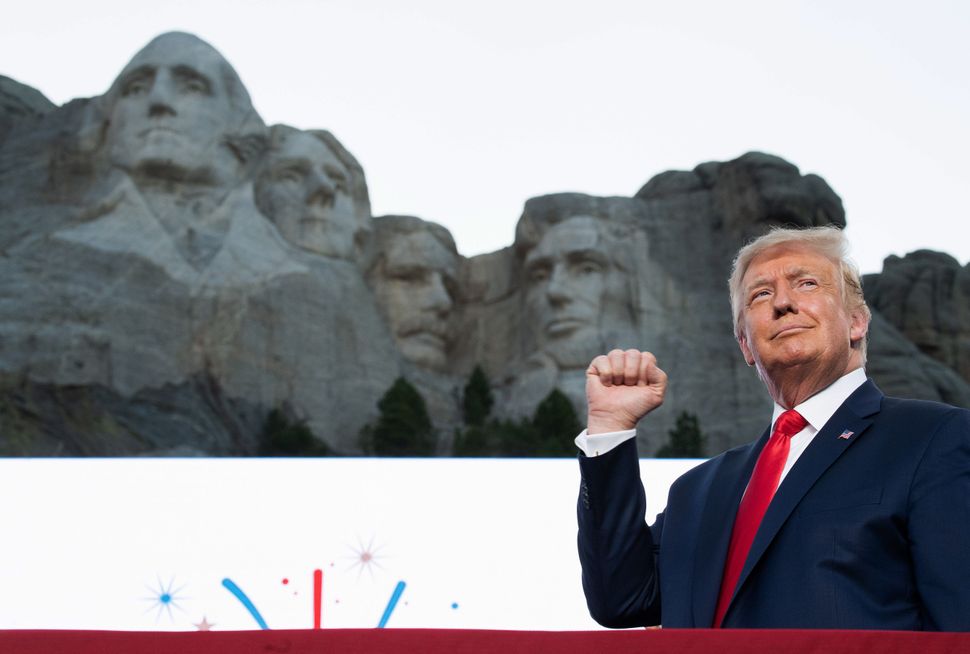 Trump at Mt. Rushmore on July 3, 2020 Image by Getty/SAUL LOEB/Contributor

Standing before the graven images of four American presidents on Friday July 3, Donald Trump announced the establishment of a “National Garden of American Heroes,” an offer of further idolatry that left historians puzzled by its strange assortment of figures.

At first glance, the American icons pegged for statuary treatment in the executive order declaring the garden seem as arbitrary as the cameos on the “Sgt. Pepper” album. One historian called the selection “random.” Another said the choices were “odd to probably inappropriate or provocative.” But, when omissions are considered and commonalities accounted for, the lineup betrays what the Trump administration values in its heroes — and what it discounts.

The proposed set of frontiersmen, statesmen, soldiers and generals is overwhelmingly white, and its honorees of color are a predictable lot: Martin Luther King Jr., Harriet Tubman, Booker T. Washington, Jackie Robinson and Frederick Douglass. There are no Latinos, no Asians, no Native Americans and no Jews. Of those listed, only one is an immigrant: Alexander Hamilton, who came to the American colonies from the Caribbean island of Nevis and did not have the typical narrative we associate with immigrants today. (Antonin Scalia, the arch-conservative Supreme Court justice, who was born to an Italian immigrant professor father in New Jersey and is one of this planned garden’s more controversial picks, comes closest to that trajectory.)

Many of the entries are problematic for being slaveowners or participants in the bloody quest of American expansionism. But taken as a whole, we see that this array shows a fondness for the hoary past of John Turnbull paintings, the now-quaint inventiveness of Orville and Wilbur Wright and the gruff, hawkish machismo of generals George Patton (a racist and anti-Semite) and Douglas MacArthur.

Trump often says he likes his generals to look like they come from “central casting,” and there’s not much of an exception here. When stocking the garden with women, for example, the order is pleased to place them in the roles society was happy to dictate for them — Clara Barton, a nurse; Dolley Madison, a first lady; Betsy Ross, a seamstress. He’s perhaps more bold in his selection of Susan B. Anthony, who by now, serves as a storybook cliché of a woman who cracked the glass ceiling. The African Americans are likewise largely included under the criteria of familiar barrier-breakers unlikely to offend those uncomfortable frankly discussing racism — King, not Malcolm X; Douglass, not James Baldwin.

The proposed individuals, “who made substantive contributions to America’s public life or otherwise had a substantive effect on America’s history,” are parsable when you accept Trump’s nostalgia for a reductive — and never real — time where crises like racism were easily resolved by Jackie Robinson’s at bats. Where America was made “great” by expanding its borders with Davy Crockett and Daniel Boone. Where science ceased its development with Amelia Earhart’s lost flight and Christa McAullife’s doomed mission to space. (God forbid they honor Jonas Salk and lend credence to virologists during a pandemic.) It is a world without music or art. It is also a distinctly partisan realm; the most recently-deceased honorees are a Republican president (Ronald Reagan), jurist (Scalia) and televangelist (Billy Graham).

Even what these statues would look like places our history firmly in an ordered past. The monuments will be “lifelike or realistic representations” not “abstract or modernist,” which, whether Trump knows it or not, echoes the enforced social realism of totalitarian states. The garden proposal fascinates on that level, as some of these former states suggest a different way to consider figures from history.

In Budapest, Memento Park preserves Soviet Era statues of Lenin, Marx and Stalin to allow visitors to reflect on the nature of dictatorships. Fallen Monument Park in Moscow displays some effaced communist leaders alongside modern conceptual art that many of those same Soviet rulers outlawed. These parks might have allowed for the kind of historical aid Trump often invokes in his defense of Confederate monuments. Their handling of cursed and vandalized objets d’histoire might provide a template for the preservation of Robert E. Lee and his toppled stone comrades: A park with the appropriate context to service historical understanding, and one that can be safely avoided or knowingly approached by the many who might find its content traumatic.

But that’s not a part of Trump’s vision for America. The Garden of American Heroes arrives as a kind of addendum to an earlier executive order calling for a minimum of 10 years in prison for those who deface federal monuments. To challenge a statue’s right to stand is being framed as an attack on heritage, and the language proposing the garden makes an effort to get ahead of any objections.

“None will have lived perfect lives,” the executive order says of its sculpture subjects — which it promises might one day include artists, “but all will be worth honoring, remembering, and studying.”

Surely we can’t expect perfection from our heroes, but we can continue to question which of them are worthy of study, which should be honored and which deserve to be carved in stone.