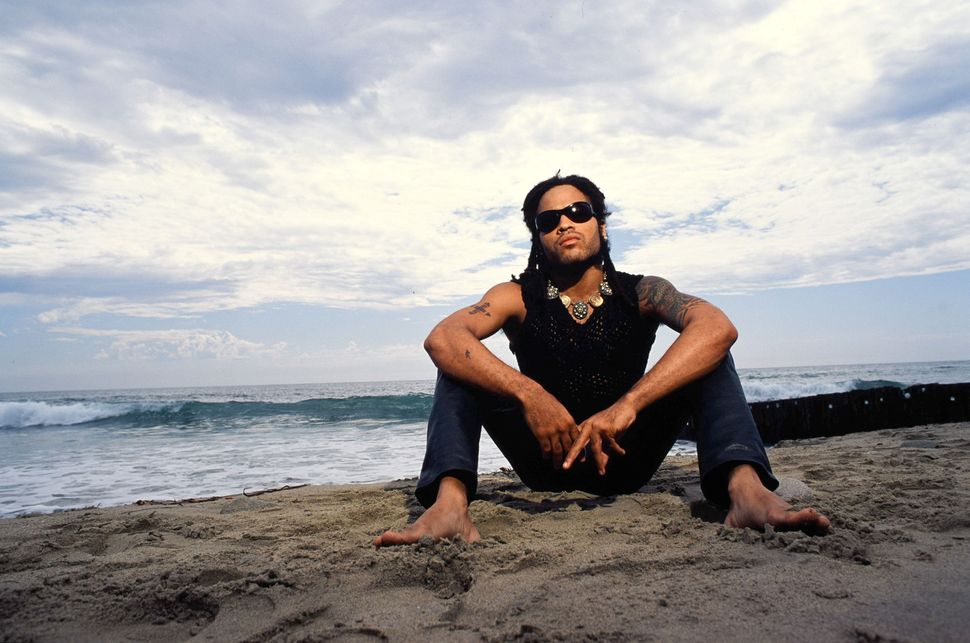 Who said, “I was just a happy-go-lucky kid hanging out in my grandma’s kitchen eating kasha varnishkes”? Uncle Solly? Your mother? Me? (Well, yes, but never mind that.) Would you believe: self-professed hippie-stoner rock star Lenny Kravitz? Because that’s just one of many of the heymish memories the multiple Grammy Award-winning rock artist and producer recounts in his terrific new memoir of his youth and early adulthood, “Let Love Rule” (Henry Holt). The book is in large part a loving tribute to his parents and his extended family, including his Jewish grandparents — Joe and Jean Kravitz of Sheepshead Bay — and his maternal grandparents, Albert and Bessie Roker, of Bedford-Stuyvesant.

As many already know, Kravitz’s late mother, Roxie Roker, to whom he dedicates the book, was an actress best-known for her groundbreaking, decade-long role on the TV sitcom “The Jeffersons,” playing the titular characters’ next-door neighbor, Helen Willis, one-half of the first interracial couple on prime-time TV. It was a role for which Roker was well-suited, having married TV producer Sy Kravitz in 1962.

As Lenny Kravitz, who was born Leonard “Lennie “Albert Kravitz in 1964, puts it, “I am deeply two-sided: Black and white, Jewish and Christian, Manhattanite and Brooklynite.” Albert was his maternal grandfather, a native of the Bahamas, a porter who settled down with his wife, Bessie, in Bed-Stuy. Lenny, who changed the spelling of his first name for show-business reasons, takes seriously his “Gemini soul.”

Kravitz says that while they were initially suspicious of his marriage to a black woman, Sy’s parents eventually warmed not only to Roxie but to the mekhutonim. “Sy’s folks soon grew to treasure Mom’s parents, and vice versa,” writes Kravitz. “Beyond bias was incredible joy.” Soon the senior Kravitzes were joining the Roker clan on annual visits to the Bahamas.

Young Lenny soaked it all in. His parents lived on the Upper East Side, but sometimes he lived with the Rokers in Bed-Stuy, before it became the gentrifying hipster neighborhood that it is today. At the time it was heavily populated by Blacks from “Down South,” as they called it, but this was also before the neighborhood became “a war zone,” as Kravitz puts it.

He also treasured his time spent with his Kravitz grandparents in Sheepshead Bay. It represented “yet another universe, Old World energy: kosher butchers, delis, synagogues.” Grandpa Joe word a “gold chain with a chai… He was in the shmata business,” writes Kravitz. Joe’s heroes were Al Jolson and Eddie Cantor, and his dream was to be an entertainer like them. “Unconsciously, I think he nudged me toward his deferred dream,” says Kravitz. “He was the first person to put a microphone in my hand.” He owned a reel-to-reel and loved to record himself singing show tunes. “He taught me songs from ‘Carousel’ and ‘South Pacific.’ I picked up the vibe and jumped right in.” Grandma Jean taught young Lennie a Russian card game called durak, or The Fool. “We’d play for hours while I devoured her chopped liver on matzo.”

Later on, he writes, “When I became an adult … and started watching Woody Allen movies, I recognized my family on the screen. That was the Jewish humor that raised me.”

Kravitz’s extended family also included his father’s two daughters from a previous marriage. Roxie Roker encouraged her husband to reach out to his daughters, from whom he was somewhat estranged, and include them in their family. They started by visiting them where they lived upstate. Before long, Laurie and Tedi were joining in on the family trips to the Bahamas.

“I was a multicultural kid,” writes Kravitz, “and, like my Jewish cousins, I wanted to have a bar mitzvah…. That’s when I learned that yarmulkes weren’t made for Afros; I couldn’t get the thing to stay on my head!” Nevertheless, Kravitz started attending religious school to prepare for the bar mitzvah ceremony. “[A]s the only Black kid in Hebrew school, I felt a little out of place,” he recalls. In the end, he withdrew and never became bar mitzvah. “But that didn’t keep me away from Jewish tradition,” he insists. “Grandma Jean and Grandpa Joe always had us over for the holidays. I remember one Hanukkah celebration at a big social hall on Long Island. My cousins and I got ahold of a bottle of Manischewitz, snuck into a corner, and finished it off.” He wound up getting so sick that, he claims, “I have never been drunk since.” (Instead, he became an unabashed fan of marijuana.)

Kravitz credits his mother for instilling in him pride in both his Russian-Jewish and African-American heritages. But she knew how the world would see him, and therefore made sure he had a strong sense of Black consciousness. That wasn’t a hard thing to do. In addition to time spent in Bed-Stuy — where he heard a constant stream of soul and salsa on the streets and emanating from storefronts and apartments — Lenny grew up among Black royalty. He had five godmothers, including Cicely Tyson and Diahann Carroll. Toni Morrison was another friend of his mother’s. His parents took him to the Rainbow Room to see Duke Ellington; Sy had arranged in advance for the orchestra to play “Happy Birthday” for young Lennie. And they frequently took him to the lounge at the Carlyle Hotel, where they were on a first-name basis with cabaret legend Bobby Short, who always set aside a table for them.

Kravitz’s highbrow cultural upbringing was challenged when, in 1969, a group called the Jackson 5 took over the radio airwaves with four consecutive number-one hits. Kravitz went crazy for the Jacksons. While his father lacked affection and was something of a stern taskmaster, he loved his son enough to surprise him one night with a jaunt downtown to Madison Square Garden to see the Jackson 5. He followed that up the next year with a trip to Manny’s Music, where he bought Kravitz his first guitar. His mom took him to see James Brown uptown at the Apollo Theatre; they even got an up-close glimpse of him backstage when they peeked inside his dressing room. By age eight, Lenny’s path in life was evident to all.

After Roxie Roker got cast in “The Jeffersons” and it became clear that the show was a hit and would be a long-term engagement, Kravitz and his father moved to Los Angeles to be with Roxie. Lenny joined the California Boys’ Choir, second in the world only to Vienna, where he received classical vocal training that would later serve him well when he began performing rock and R&B. After Grandpa Joe died, Grandma Jean left Sheepshead Bay and moved to Los Angeles, where she settled in an apartment in the heavily Jewish Fairfax District. Lenny wooed one of his first girlfriends, Jane Greenberg, on dates at the local Bagel Nosh.

As a young teenager, Lenny attended a summer camp in California, when one day he had what he describes as an “epiphany” and he was “born again.” He began exploring Christianity and discovered the Seventh-day Adventist Church, where he felt comfortable because they maintained many Biblical laws and observed Shabbat on Saturdays. Plus, he saw Little Richard preaching at an SDA church, where he referred to himself as a “Black Jew.” If it was good enough for Little Richard, it was certainly good enough for Lenny Kravitz.

In 1984, a sitcom about a Black family debuted on NBC. One week, a photo of the TV family appeared on the cover of TV Guide. Kravitz looked at the photo, pointed to one of the young actresses, and told a friend that someday he would marry her. The show was “The Cosby Show” and the actress was Lisa Bonet. Little did Kravitz know at the time that Lisa’s mother was Arlene Litman, a white Jewish music teacher, and her father was Allen Bonet, an African-American opera singer. A few years later, the two bumped into each other in an elevator. They became friends, in part based on their similar backgrounds. “We were both comfortable in different cultures,” writes Kravitz. A year after the two married, they gave birth to a girl they named Zoë Isabella Kravitz. She would grow up to become a famous actress, fashion model, and musician. According to a profile in Rolling Stone magazine a few years ago, Zoë Kravitz, the great-granddaughter of Joe and Jean Kravitz of Sheepshead Bay, “identifies as a secular Jew.”

Seth Rogovoy is a contributing editor at the Forward. He often mines popular culture for hidden Jewish stories.