Onstage wasn’t an option, so Jewish artists reimagined theater for the pandemic era. Here’s how 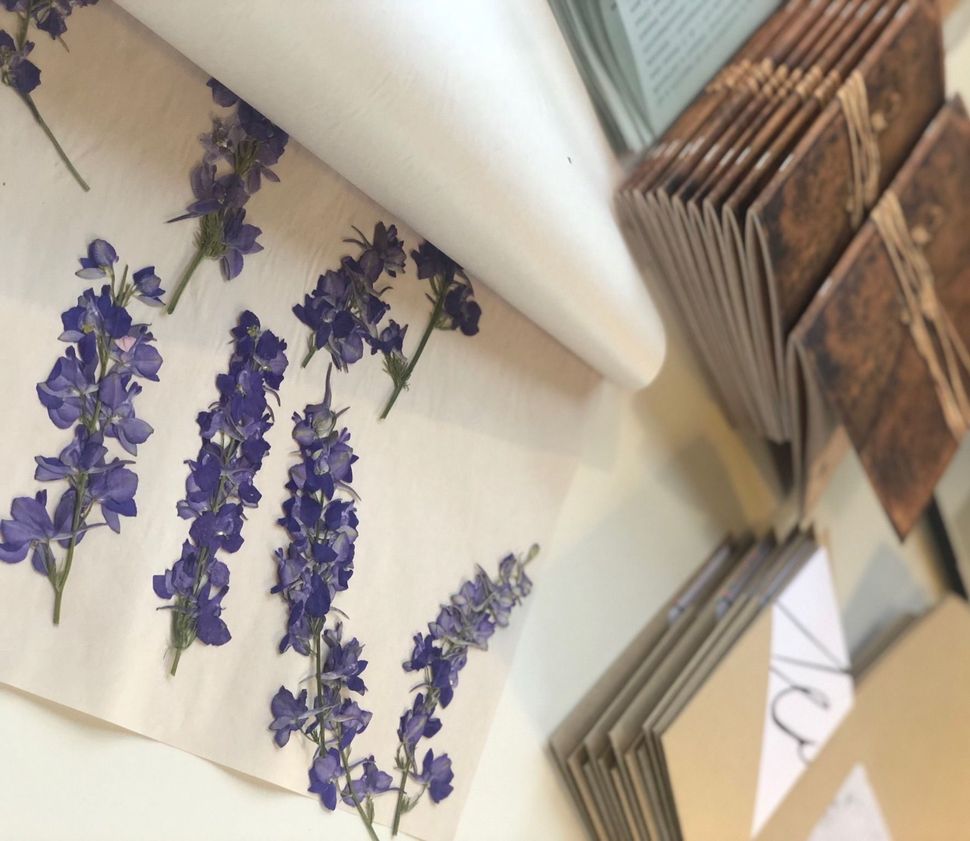 On Site Opera sent audience members boxes containing librettos and other ephemera related to its first pandemic era production, “The Beauty That Still Remains.” Image by Courtesy of On Site Opera

In a normal year, David Winitsky spends most of the spring on the road.

Winitsky is the founder of the Jewish Plays Project, a theater incubator whose annual playwriting contest begins in March with a series of live readings staged at Jewish community centers across America. Usually, Winitsky travels to each location, rehearses a cast of actors, and hosts an event during which audience members view excerpts from several plays and vote for their favorites.

Even as the American coronavirus caseload climbed in early March, Winitsky held out hope that he could proceed as planned: It was hard to imagine the competition without in-person gatherings. One night, Winitsky called a colleague to confirm that the contest’s first reading was still on. The next day, news broke that major cultural institutions like the Metropolitan Opera and Carnegie Hall were closing their doors in an effort to slow the disease’s spread.

Suddenly, it was abundantly clear that this was not a normal year.

Theater closures and stay-at-home orders left artists like Winitsky scrambling to figure out what theater looks like at a time when public gatherings aren’t possible. The pandemic’s first weeks yielded a bonanza of free streamed content, made available by various institutions as a gesture of solidarity and bid to remain relevant.

Yet many artists felt that, on Zoom, their work lost much of the immediacy and intensity that distinguishes live performances from prerecorded ones. With no clear end to the pandemic in sight, many shifted from reproducing their work online to re-imagining it entirely for an era in which the most captivating features of live theater — from virtuoso performances to the energy of a crowded lobby — are those that make it unsafe.

“People were trying to figure out what happens now,” Winitsky said. “What do theater people do?”

For Winitsky, the answer was a complete overhaul of the Jewish Playwriting Contest. At first, he and his colleagues tried to stage standard readings virtually, with actors simply reading their lines over Zoom.

But “like many other people, we realized that is not satisfying,” Winitsky said. Instead, he invited several directors to create more innovative virtual stagings of the plays under consideration. Some directors treated the assignment like a film project, asking actors to create makeshift sets in their own homes. One worked with an illustrator to create an animated version of a play excerpt. For a play centered around dance, Winitsky spliced snippets of classic vaudeville performances into a prerecorded reading.

A Moving Picture Excerpt from Jewish Plays Project on Vimeo.

Winitsky then played those recorded excerpts at virtual events he hosted with each of the community centers he’d planned to visit in person. He also uploaded them to the Jewish Plays Project’s website, allowing people who did not attend a formal event to watch and weigh in on their favorites. Not only did the events draw larger than usual crowds, over 1,000 people voted online — a major bump in engagement.

“It actually ended up being a really successful year for us,” Winitsky said.

Before the pandemic began, Hannah Aliza Goldman was looking forward to seeing “In the Kitchen,” a play she created, staged by the feminist production company Experimental Bitch Presents. Goldman had spent years crafting the piece, an exploration of Arab Jewish femininity based on her own experiences and interviews with other Mizrahi women. After workshopping the play in 2019, Experimental Bitch Presents obtained a Brooklyn Arts Fund Community Arts Grant to stage a full run. Finally, it looked like the project was getting its big break. Then, the pandemic arrived.

“In the Kitchen” depends on sensory experiences: In the original version, Goldman prepares Arabic salad and Moroccan mint tea onstage and then invites her audience to partake in the meal. She knew an online staging would strip the play of its emotional impact. So she decided to eschew Zoom entirely, working with her director, Coral Cohen and the team at Experimental Bitch Presents to transform “In the Kitchen” into an offline at-home experience.

Inspired by care packages many people sent and received in the early days of the pandemic, Experimental Bitch Presents commissioned Awafi Kitchen, a pop-up restaurant devoted to Iraqi Jewish cuisine, to create a mail order recipe box with ingredients to make ba’be b’tamar, a distinctive date-filled biscuit. While making the biscuits, audience members listen to an audio play that unfolds in conjunction with the recipe. 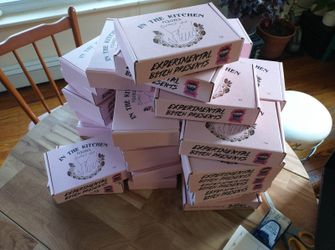 Awafi Kitchen, a pop-up restaurant specializing in Iraqi Jewish cuisine, and Experimental Bitch Presents collaborated with graphic designer Alexandra Lenihan on the design of the recipe boxes for “In the Kitchen.” Image by Annabel Rabiyah

For Goldman, long accustomed to multimedia performance, adapting the piece to focus on audio was a major shift — especially since she had to do it all from home. She worked with a sound designer to create a recording studio in her closet. She spent hours recording songs and stories, and rerecording when street noise or sirens interrupted. Each time her team finished a new draft of the play, she tested it out in her own kitchen, fine-tuning the timing so that audience members could knead dough or let it rise without pausing the audio.

“We were asking people to take a few hours out of their day: Don’t look at a screen, don’t do something else while you’re doing this,” Goldman said of the pressure she felt to get the audio just right. “We were trying to make an immersive experience on someone’s phone.”

Like Goldman, Eric Einhorn, the artistic director of On Site Opera, initially struggled to imagine how to serve a scattered, homebound audience. For an opera company that stages site-specific operas in unconventional venues — think “Pygmalion” in a wax museum — the end of public gatherings seemed as if it would be crippling.

But after canvassing regular patrons, Einhorn found that many were missing not consumption of art, which they could easily do at home, but the experience of being in an audience.

So when Einhorn and his colleagues staged their first pandemic-era production, “The Beauty That Still Remains” — a three-part series of song cycles based on real and fictive diaries, including Anne Frank’s, which is still running — they attempted to recreate not just a performance but the feeling of attending one.

That meant creating physical artifacts to accompany virtual performances. Along with access to prerecorded performances, audience members received librettos designed to look like actual diaries. While program notes are normally a minor accessory in the opera experience, Einhorn treated the libretto as an artistic object in its own right, basing the design on pictures of Frank’s actual diary and holding “auditions” for handwriting that resembled hers. 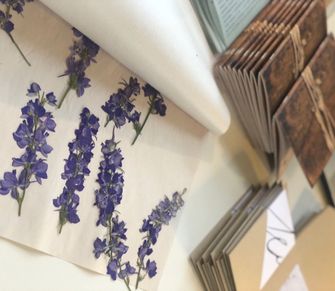 On Site Opera sent audience members boxes containing librettos and other ephemera related to its first pandemic era production, “The Beauty That Still Remains.” Image by Courtesy of On Site Opera

After listening to the performance, audience members could join virtual discussions led by artists and experts — the composer Juliana Hall, for example, discussed the process of creating music from Frank’s words. The panels, Einhorn said, imitated the longed-for “buzz” of a theater lobby.

In some ways, virtual performance has been a boon for artists looking to expand their reach. Like the Jewish Plays Project, On Stage Opera has gained a modest international following, which Einhorn hopes to expand through remote programming even after the pandemic ends.

Goldman said that adapting “In the Kitchen” forced her to create a hybrid project that may help her stand out in the New York theater scene “saturated” with in-person theater experiences.

Still, she’s biding her time until she can step into a theater again. “I’m a born performer,” Goldman said. “I love the engagement of the audience. I love getting that instant feedback. And with this piece, it’s not that. I kind of feel like I put a piece of my heart in the mail and shipped it out.”

Correction: A previous version of this article stated that Hannah Aliza Goldman obtained a Brooklyn Arts Fund Community Arts Grant to stage “In the Kitchen.” In fact, the production company Experimental Bitch presents obtained the grant.

Onstage wasn’t an option, so Jewish artists reimagined theater for the pandemic era. Here’s how