Remembering Larry King, a broadcast legend and a consummate entertainer 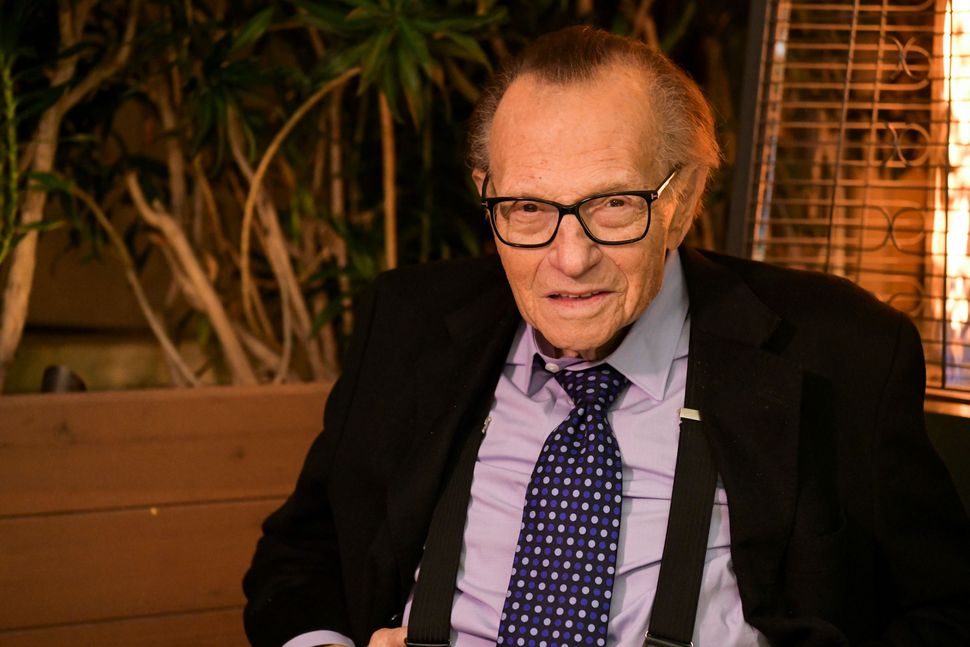 The TV host Larry King, who has died at the age of 87, applied a celebrity interviewing approach to broadcast journalism in a career lasting well over a half-century, with his Brooklyn Jewish roots as a constant element of his public persona.

King’s silhouette as interviewer became iconic, with hunched shoulders leaning in towards guests and suspenders, an autographed version of which were auctioned in 2016 to benefit the American Jewish Historical Society.

His distinctive galluses and shirtsleeves were even reproduced on a “Larry King” Onesie, marketed as infant wear on the website of Yussel’s Place, a vendor of Judaica.

Starting with his own childhood, King showed signs of occasionally being led astray, as “The Sun Sentinel” newspaper reported in 1988.

In junior high school, he joined a friend in faking the death of a classmate in order to take up a collection, ostensibly for funeral flowers. They used the money instead to buy Nathan’s hot dogs at Coney Island.

Later in life, financial peccadillos led to King being arrested in 1971 and accused of theft by a business associate, with charges dropped shortly thereafter.

Just last year, King was once again mixed up in unorthodox business practices, this time as victim of a scheme to discredit a Chinese dissenter with a faked interview in which he was filmed reading questions with no idea of what responses would ensue.

A few such raffish episodes in a long career certainly do not prove King’s jesting claim that dumbness was the secret of his success. Yet in truth, he was more of an endearing showbiz schlemiel than a standard cut-and-dried professional journalist.

An ideally appreciative audience for others, especially comedians, King was so visibly pleased to be on set under the studio lights that he repeatedly attracted criticism for being too soft on interviewees.

One such incident occurred in 1996, when Marlon Brando claimed: “Hollywood is run by Jews. It’s owned by Jews, and they should have a greater sensitivity about the issue of people who are suffering because they’ve [been] exploited.”

To further convey his viewpoint that Jews should be more aware of the travails of other ethnic minorities, Brando then launched into a series of ethnic slurs to which King mildly protested, “When you say something like that, though, you’re playing right into anti-Semitic people who say the Jews run…”

Whereupon Brando interrupted him again with another rant.

In the political realm, King’s passive approach of letting guests have their say could lead to especially toxic developments. Possibly distracted by the presence of a translator, King welcomed Mahmoud Ahmadinejad, then-president of Iran in September 2008, with results unsatisfactory for many viewers.

Between a respectful introduction and final cordial handshake, King gave Ahmadinejad a forum for denying the Holocaust, claiming that Israelis are “not Jewish people,” and other absurdities.

Somehow King’s West Coast-style cordiality via Brooklyn was no match for the occasion. At a public event in 2017, King would claim that Ahmadinejad’s Holocaust denial proved the “only time I’ve ever interviewed someone and I lost my composure.” At the time, the interview seemed very much business as usual.

When King filmed a promotional appearance for Sacha Baron Cohen’s 2012 comedy “The Dictator,” the mix between performance and reality in his interviewing career became even clearer.

Baron Cohen, as Admiral General Aladeen, dictator of the fictional Republic of Wadiya, spat on the floor after King admitted being Jewish. King’s reading of scripted questions to Baron Cohen/Aladeen was indistinguishable from his style in serious interviews with world leaders.

One conclusion might be that for King, in some ways it was all acting. That is certainly the impression from an early dramatic role in the 1961 TV detective series “Miami Undercover.” King played a Miami radio deejay named Sleepy Sam, who rejects gangsters’ payoffs for playing records, and dies in a volley of bullets.

King read his lines with perfect plausibility, helped by an already resonant voice with the jittery bebop cadence of a hipster circa 1960.

He might have continued as an actor, were it not that by then, his radio career was already launched through live radio broadcasts from the Miami Beach Pumpernik’s, one of a chain of delis, now gone, founded by Wolfie Cohen, who also established such outposts of Jewish cuisine as Wolfie’s and Wolfie Cohen’s Rascal House in Florida.

King was a lifelong devotee of deli, and with some Jewish entertainers in the studio, notably Don Rickles, whom he even invited in 1997 to make a speech at one of his weddings, or Albert Brooks, he was constantly dissolved in unselfconscious laughter, as if kvelling at a table in Pumpernik’s or Wolfie’s.

Such delights must have compensated for more fraught moments, such as in June 1995, when “Larry King Live” attempted to broker peace in the Middle East by interviewing, if not uniting, Israeli prime minister Yitzhak Rabin (from Tel Aviv), King Hussein of Jordan (from Amman), and PLO chairman Yasser Arafat (from Jericho) on a single show.

KING: Have you ever talked to Roman Polanski?

KING: How can you have a civil conversation with someone who so brutally murdered your sister?

KING: I’m sorry. When the fact that he would have this terrible thing happen to him after the death of your sister, to once again focus you into the public light. That’s what I meant.

A repeated tendency to confound things inspired comedian Jerry Seinfeld to launch a mock tirade in the same year, when King asserted to him about the end of Seinfeld’s sitcom: “[The network] didn’t cancel you, you cancelled them.”

Defending his ratings, Seinfeld made an ironic effort to apply a cognitive ability test to King by asking, “Do you know who I am?”
Although flustered on that occasion, for the most part King retained his good-humored equanimity, as some years of impromptu zany tweets about whatever happened to be on his mind demonstrated.

One typical conundrum by King, tweeted in March 2015: “How did Noah know there were only two flies on the Arc [sic]?”

Ultimately, Larry King’s gifts as a Jewish amuser and entertainer, a venerable tummler in the sober news media world, sustained a career remarkable for its longevity and the genuine affection it inspired among his loyal viewers.

Remembering Larry King, a broadcast legend and a consummate entertainer