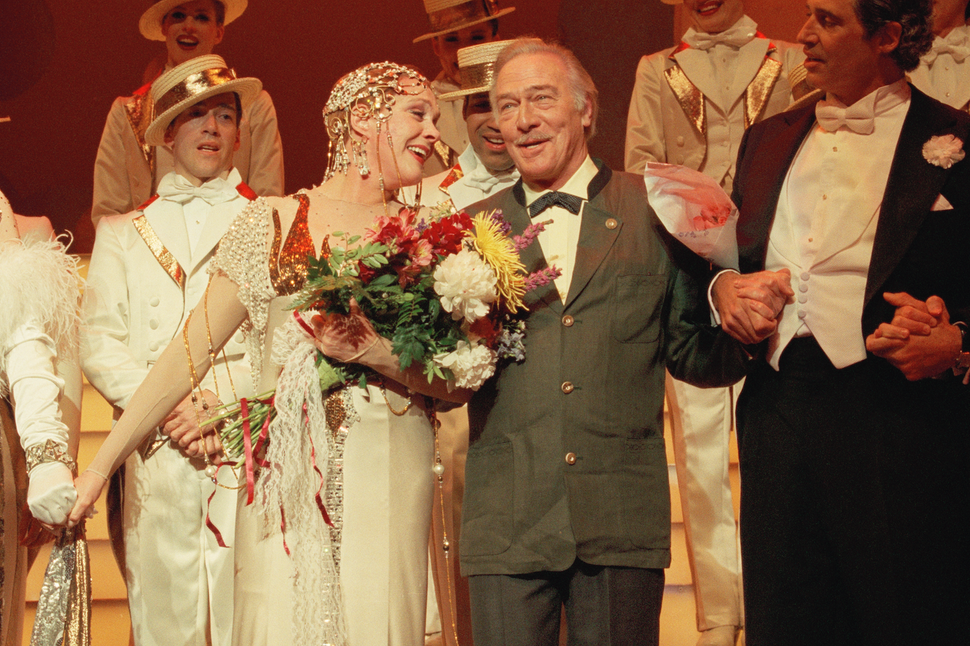 Last year, America was reminded of the anti-Nazi onscreen activism of Canadian actor Christopher Plummer, who died on Feb. 5 at age 91, after the previous occupant of the White House’s State of the Union address.

After that event, House Speaker Nancy Pelosi tore up a copy of the speech in a filmed image which was quickly turned into a GIF juxtaposing Plummer as Baron von Trapp in “The Sound of Music,” tearing a Nazi flag into pieces.

Even if Plummer is best remembered for his appearance in “The Sound of Music,” his full achievements were vaster and varied. A fervent, if sloppily edited, memoir published in 2008, reminds us that his artistry was often inspired by Yiddishkeit.

Growing up outside Montreal, he befriended the Canadian Jewish writer Mordecai Richler, whom he later described as “about to raise his head above the Jewish ghettos of Saint Urbain Street… the youthful satirist… was poised, ready to give us his ‘Son of a Smaller Hero’ and Duddy Kravitz.”

Plummer left Canada, he noted in his memoir, because there, White Anglo-Saxon Protestants (WASPs) “thought that theatre was something that you did in your spare time. The more artistic Jewish community was too occupied in rising like a phoenix from the dying ashes of racial intolerance to take up the slack at present.”

Soon after he reached New York, he was mentored by the theatrical agent Jane Broder: “Her speech was hard-core New York Jewish. She began most of her sentences with, ‘Now listen, honey.’…A surrogate mother and Golda Meir rolled into one, she would have made a damn fine prime minister of anything.”

Broder was also the agent of Jewish actors Paul Muni and Paul Lukas, and worked with producers Herman Shumlin and Kermit Bloomgarden, as well as the playwright Elmer Rice (born Reizenstein).

She first arranged a job for Plummer as part of a public play reading directed by her friend Morris Carnovsky. After Plummer auditioned for the role of a villain, Broder “came backstage afterwards looking like the matriarch of all Yiddisha-Mamas. She gave me the fiercest of double whammies and said, ‘Honey, you got yourself an agent.’”

As a young jobbing actor, Plummer was nourished by Jewish cuisine in downtown Manhattan landmarks: “Ratner’s downstairs for great kosher lunches thrown at you by traditionally insulting waiters; ancient Moscovitz and Lubowitz down the road for delicious Polish Jewish nosh.”

Of course, the Moskowitz & Lupowitz Restaurant as the place’s name was correctly spelled, was founded by Romanian Jews, not Poles. No matter. Plummer’s enthusiasm was unmistakeable.

Around the time that Plummer was a regular diner there, Moskowitz & Lupowitz offered such delicacies as Calf’s Brains and Pickled Herring, Stuffed Derma with Kashe Varnishkis, Broiled Lamb Tongue, and Boiled Brains with French Fried Potatoes.

He also thrilled to the Lower East Side’s Yiddish theater legacy: “These were the streets upon which Jacob Ben-Ami, Maurice Schwartz and the famous Adler family had all made history. This is where I had seen the fabulous Molly Picon, mama of all vaudevillians, and that slippery smooth comic, the sour cream on the Borscht Belt circuit, Myron Cohen.”

It seems somehow extraordinary that after a half-century, Plummer still cherished the memory of Cohen, a Jewish stand-up comedian rarely discussed in recent years.

By 1956, Plummer was acting alongside the Yiddish theater legend Paul Muni in the TV film “A Letter from the Queen.”: “Muni was a master at hogging screen time – what a devilish old trickster he was!”

Soon Plummer would have occasion to reproduce his own version of Muni’s scene-stealing diablerie when he played the Devil in the 1958 Broadway production of “J.B.,” an updating of the biblical “Book of Job.”

Even without Muni’s precedent, the young Plummer was something of a hell-raiser and Lothario; his memoir mentions his interest in the English actress Claire Bloom, whose Jewish origin appears to have been a decided attraction: “She was a pure-skinned, raven-haired, Semitic beauty from [England] and her name was Bloom. Not the Molly Bloom of “Finnegans Wake” nor the bloom of lilacs in Walt Whitman’s dooryard, but a fresh young bloom called Claire.”

Of course, Plummer should have situated Molly Bloom as a character in Joyce’s “Ulysses” instead of “Finnegans Wake,” but once again, the basic message is indubitably convincing.

A laser focus on truth-telling got Plummer through such roles as the Chekhov-like narrator in Neil Simon’s “The Good Doctor” (1973).

Plummer also played the wise photographer Alfred Stieglitz, of German Jewish origin, in a 1991 film about the relationship between Stieglitz and the painter Georgia O’Keeffe.

Showing his range, Plummer was also the fiery American Jewish newsman Mike Wallace in “The Insider,” (1999) directed by Michael Mann.

In a memorable scene, Plummer as Wallace screams energetically at representatives of the terrorist group Hezbollah, not at all intimidated.

Wallace was another of Plummer’s Jewish heroes, as he informed an interviewer in November 1999. Plummer had watched Wallace on TV from the 1950s onward, puffing on “endless cigarettes” as a proponent of “hard-core journalism. He was riveting. It was a whole new way of attacking guests. He was using the medium correctly, because [TV] is a cruel medium.”

In other, more uneven films, Plummer demonstrated comparable forthrightness. He was Dr. Rosen, the presumably Jewish psychiatrist in Ron Howard’s “A Beautiful Mind” (2001) about the mentally ill mathematician John Nash.

Plummer also validated by his mere presence the otherwise murky narrative of Atom Egoyan’s “Remember” (2015). He played a dual role, as Zev Guttman and Otto Wallisch, a presumed Holocaust victim who may have actually been a Nazi.

For all of Plummer’s longstanding complaints about the one-dimensionality of the screen character of Baron von Trapp in what he irreverently referred to as “S&M” or “The Sound of Mucus,” the musical “The Sound of Music” conveyed clear-cut imagery that encouraged no such ambiguities.

Whence the flag-tearing GIF, which may have been considered blatant or unsubtle in 1965 when the film was released. Yet in our time when Nazi symbols have been paraded into the US Capitol building in Washington, D.C. by insurrectionists, unambiguity is more welcome.

With nuance or boldly direct interpretations of Jewish characters and others, Plummer’s talent was so impressive that he was one of the rare actors whose performance must be looked upon with undiluted admiration, disarming criticism.

One devoted fan of Plummer’s was the American Jewish caricaturist Al Hirschfeld. When Hirschfeld, who had seen John Barrymore act onstage in the 1920s, witnessed Plummer’s incarnation of Barrymore in a 1997 Broadway play directed by Gene Saks, he proclaimed that Plummer in the role was a far greater actor than Barrymore himself.

In this way, Plummer’s abilities transcended the usual criterion of mere believability for actors. And even without his jaunty, sometimes slightly scabrous, autobiography “In Spite of Myself,” Plummer’s performances alone would convince us that he was an enthused admirer of Jewish people and their culture.