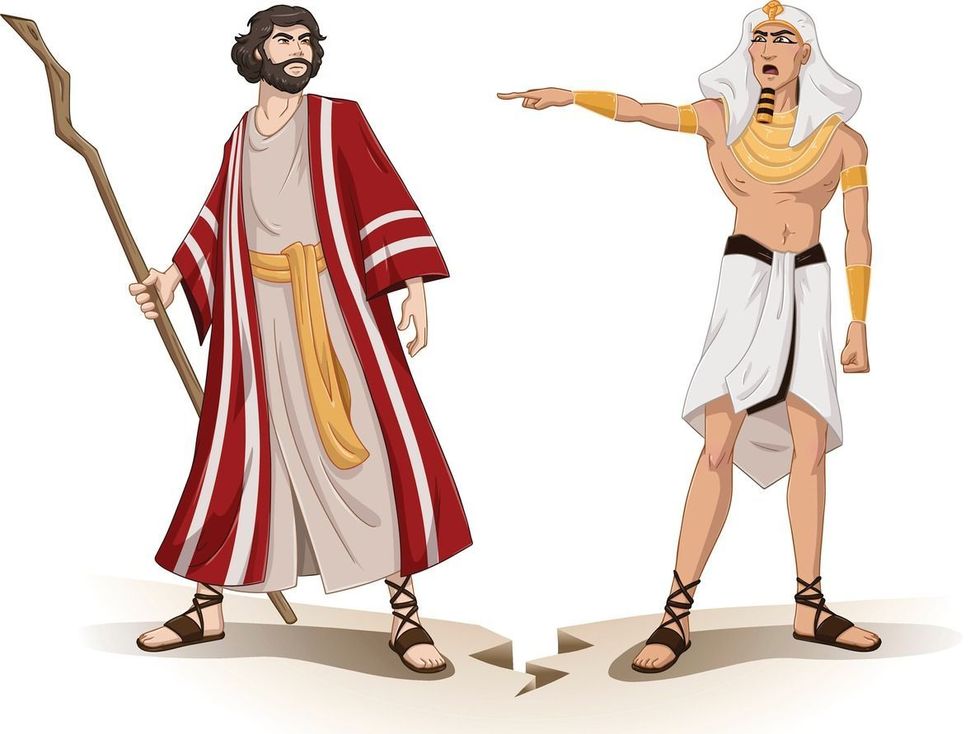 Pharoah and Moses Courtesy of iStock

Can Bible characters be “canceled?” This dire fate was suggested by Bill Hemmer, of Fox News, as the natural continuation of criticism of American presidents. “I tell ya, if they start canceling these American presidents, they’re going to come after Bible characters next — mark my words, right?” he warned. The topic under discussion was a move by Chicago mayor Lori Lightfoot to reevaluate the city’s monuments to ensure none are offensive; the list of monuments under scrutiny includes ones of Benjamin Franklin, George Washington and Abraham Lincoln.

Much of Twitter has already pointed out that there’s irony in Hemmer referring to biblical figures as “characters,” as implying they are fictional is already an affront to those who believe in the literal truth of the Bible.

This is a fair point, but it misses the real issue — the Bible is full of canceled people. Leaders, everyday folk, even whole cities and tribes at once. God loves canceling people! Lot’s wife? Being turned into a pillar of salt is pretty canceled, not to mention Sodom and Gomorrah. Adam and Eve? Basically the definition of being kicked out of society, aka canceled. Cain? Literally given a mark of shame! Also, everyone before Noah was canceled pretty decisively. That’s not even an exhaustive list of cancellations in Genesis, much less the rest of the Bible.

But Hemmer has inspired me to think more deeply. God and all the biblical authors may have missed some folks. Who else should have been canceled? I knew I got a Master’s degree in religion for a reason.

Disclaimer: This should not be taken as a complete list, and I’m not even touching the New Testament. In any case, canceling is really a communal activity so I’m just getting the ball rolling. The project is in your hands now.

I’m sorry, I know he’s the father of the Jewish nation, but Jacob is a terrible person. He manipulated his own twin into trading a bowl of lentils for his birthright, and then tricked his blind and dying father so he could steal Esau’s blessing as well.

Even if we forgive those trespasses because he was probably a teenager, there’s the whole question of marrying sisters. This was admittedly not all his fault — Laban also tricked Jacob — but he doesn’t seem to have been particularly nice to Leah, plus there’s the whole blatant favoritism among his kids. A terrible father and husband! Every time you think he’s turned over a new leaf, he lies to someone again.

Esau, on the other hand, has been unfairly canceled and doesn’t deserve the hate he gets from Jewish tradition, which often accuses him of violence. He seems like kind of a blockhead, but also generally a nice dude. He works hard to bring home good food to his ailing father and even forgives his conniving brother. Justice for Esau!

Look, David makes a lot of very human, selfish mistakes, but he is a sympathetic character — we have the whole book of Psalms full of his songs and poetry, and he explains and regrets many of his trespasses. He’s relatable and flawed and human. But also he just kept doing terrible things!

I’d say the biggest no-no here is the whole situation with Batsheva (as immortalized by Leonard Cohen in “Hallelujah”). I don’t really care how much you regret and apologize for sleeping with someone’s wife, impregnating her and then sending her noble husband to the front lines of a war so that he will die without ever finding out what you did. Sorry, some things are just too bad to come back from.

On Purim, we’re supposed to get so smashed that we can’t tell the difference between Haman, the villain in the book of Esther, and Mordechai, the hero. Except, first of all, by all rights Esther should be the hero. But also, they’re less different than you’d think.

First of all, Mordechai basically sold his niece as a concubine, and moreover as a concubine to a non-Jewish king and has her pretend she isn’t Jewish! I’m the product of an intermarriage myself, but for such a proud Jew as Mordechai, that seems in exceptionally poor taste. And then, in retaliation for Haman’s attempt to slaughter all of the Jews, Mordechai got King Ahasuerus to let him and his fellow Jews kill anyone they found threatening in the city, leading to 75,300 deaths. Two wrongs do not make a right, Mordechai!

4. Jacob’s sons, except Joseph and Benjamin

There are 12 of them — the 12 tribes of Israel, of course, all lauded forebears of the Jewish people. But, as is the case with their dad, I’m not sure we should be so proud to own them.

Their sister, Dinah, was raped, which is bad, and it is good that they rescued her. But — and I’m going to simplify this situation to use the ethics of the time, which would probably not have taken Dinah’s desires into consideration — he also wanted to marry her, which should have fixed the situation. This guy was in love with Dinah and willing to do anything to marry her, so the brothers demanded everyone get circumcised in order to marry their sister. And then they slaughtered them! Which, incidentally, probably doomed Dinah since it’s unlikely she could have found a new marriage after that.

Also — and this is a biggie — they sold their own brother to Egyptians as a slave and possibly to be killed because they were jealous of a coat! Accusations of human trafficking are a classic reason for cancellation these days, unfortunately, whether it’s Jeffrey Epstein or Ghislaine Maxwell, and I don’t see why Asher, Naphtali, Simeon and friends should not go down with them.

My main beef with Sarah is her handmaiden, Hagar. She gave her slave to her husband as a surrogate, which raises some hairy questions about consent (which would also apply to Rachel and Leah, incidentally); if you’re unfamiliar, this practice inspired the dystopian show “The Handmaid’s Tale.”

But then, to make matters worse, she threw Hagar and Ishmael, the son she had forced on her and then adopted as her own, into the desert with nothing to save them just because she miraculously got pregnant herself and was jealous about inheritance. First of all, she had already committed to adopting Ishmael and that is truly abusive parenting. Secondly, it was attempted murder. God saved them, but that doesn’t excuse Sarah.

This is a classic reason for cancellation — getting caught saying something gross about women, particularly women’s sex lives. In this case, his rape-y and sexist statement was immortalized in the Bible. “I, too, stripped back your skirts over your face” he says in Jeremiah 14:26-27. “I behold your adulteries, your lustful neighing, the depravity of your whoring.” Even accounting for the fact that it’s a metaphor (about Jerusalem), it’s unacceptable. There’s probably more examples, but Jeremiah is a long book.

Same things as Jeremiah, pretty much exactly. Stop making metaphors about women “whoring” you guys! There are so many other ways to call things bad that don’t slut-shame or denigrate sex work — which, incidentally, seem to be considered a totally fine a profession in the Bible.

Specifically, Ezekiel 16 goes on at length with a metaphor about harlotry, with choice accusations such as “you sullied your beauty and spread your legs to every passerby” and “you played the whore with them but were still unsated.” Nope!

A lot of the prophetic books talk like this, but both Ezekiel and Jeremiah are really long ones, so I’m going to call them out specifically.

This one is not a metaphor — he’s just poetically philosophizing about life, as he does. And, he muses, “Now, I find woman more bitter than death; she is all traps, her hands are fetters and her heart is snares.”

He’s not calling out a specific ex, which I guess I could forgive him for because we all get upset after breakups. But he’s just talking about women, at large, being evil, and that’s not really OK.

Ecclesiastes is admittedly a pretty ambiguous book of the Bible, so I might get called out here for totally misunderstanding this, but I still think it’s a dangerous phrase to put out into the world and have people take the wrong way. If you meant something else, say that! You brought this on yourself.

I know, bold. But also the obvious answer, right? For the global pandemic, if nothing else.

Mira Fox is a fellow at the Forward. You can reach her at fox@forward.com or on Twitter @miraefox.)