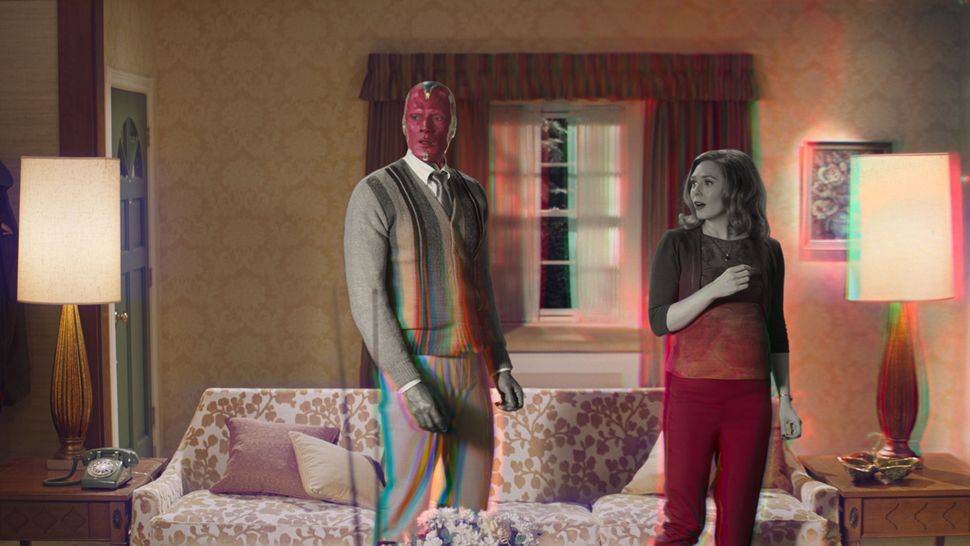 Paul Bettany and Elizabeth Olsen in ‘WandaVision’ on Disney+. Courtesy of Marvel Studios

Set against a candied nostalgic concoction of the great American sitcom, “WandaVision” on Disney+ is a story of trauma, upheaval and loss. This should come as no surprise considering the origins of the show’s protagonist, the Marvel superhero Wanda Maximoff, also known as the Scarlet Witch. Wanda, along with her twin brother Pietro, survived the Yugoslav Wars of the 1990s and were orphaned at a young age. And in a recent battle to save the world, Pietro and Wanda’s lover, Vision, died before her eyes. “WandaVision” picks up a few weeks after the death of Vision and examines Wanda’s grief within the world of the ever-peppy sitcom.

The aftermath of Wanda’s loss makes for a compelling bit of storytelling. But “WandaVision” is singular because of the particular type of traumas she has experienced. Although Marvel has changed Wanda’s backstory and parentage more than once, Wanda’s family — either partially Jewish or fully Romani — survived the Holocaust. (She has been the daughter of Auschwitz survivors, Max — X-Men’s Magneto — and Magda Eisenhardt, and in the current incarnation, she is the daughter of Romani parents.) When parents and grandparents experience deeply traumatic and life-altering events like genocides, famines and wars, their children and grandchildren often experience psychological distress and changes to their genetic makeup that alter how their genes function. Scientists call it intergenerational trauma.

Researchers agree that people with this trauma do not all experience it in the same way. While some descendants are driven to make the world a better place, others act immorally. But, most scientists agree that people who live with intergenerational trauma experience high levels of stress, anxiety and PTSD. In one study, scientists asked, “Are children of Holocaust survivors more likely to respond differently to a car accident than those who are not the children of survivors?” Researchers found that children of Holocaust survivors are three times more likely to respond to trauma by getting PTSD just like their parents.

Wanda Maximoff is not just reacting to the trauma of having lost two people she loved. Instead, Wanda’s trauma is layered. All of her reactions are colored by what lies underneath: the intergenerational trauma she inherited from her mother and father.

Creating a world where the outsider feels welcome 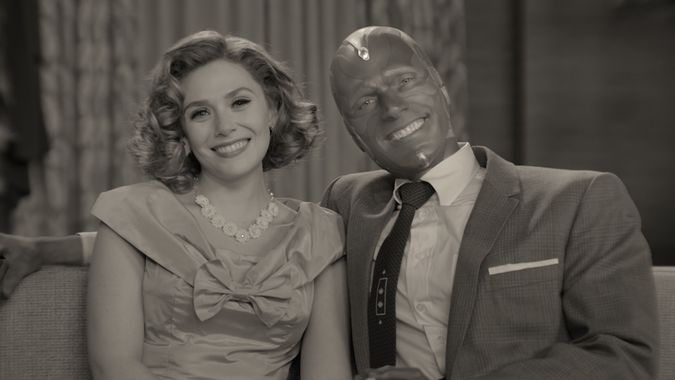 Each episode of ‘WandaVision’ portrays a classic sitcom from different decades. The first episode reminds viewers of ‘The Dick Van Dyke Show.’ Courtesy of Marvel Studios

After losing a brother and a partner, Wanda fully enters into the realm of PTSD. In the opening scene of the first episode of “WandaVision,” Wanda and Vision are oblivious; so deeply scarred, they have forgotten the traumatic events that brought them to Westview, New Jersey. They are even unaware that they have superpowers until the end of the first episode. Instead, the couple stands cluelessly inside a prototypical suburban home, an homage to the 1960s hit, “The Dick Van Dyke Show.” Subsequent episodes mimic different iterations of the great American sitcom from “Bewitched” to “The Brady Bunch,” “Family Ties” and “Modern Family.”

While viewers are in the dark during the first few episodes, the fourth leaves little in question. The world of sitcom bliss is engineered by Wanda who, in an escape from her overwhelming grief, has created a bubble around the town of Westview, New Jersey. Within the bubble, Wanda controls the minds and bodies of the town’s residents, using her telekinetic powers to bend everyone to her will. Grief is powerful, and Wanda creates her idealized life: a beautiful house in the suburbs, a loving husband, two healthy children, and problems that are solved in less than 30 minutes.

Like many who suffer from intergenerational trauma, Wanda wants to control the world she lives in. According to some psychiatrists, people who suffer from this trauma strive to create an environment in which nothing surprising or bad occurs. For Wanda (brought up amidst socio-political upheaval) that ideal world is the all-American family depicted in sitcoms. The nuclear family is whole, people do not die, and problems are solved quickly. But Wanda’s PTSD can be triggered, causing her playacting to break. When she is reminded of her trauma, the veneer of amnesia slips away, and she becomes uncontrollably angry and violent. In one instance, she forcibly ejects Monica Rambeau, an ally, from the bubble, and when threatened by a government agent, Tyler Hayward, she extends the bubble to encompass the threat, Hayward’s armed troops.

Wanda creates the world of “WandaVision” as a refuge, a place where she can pass as Wanda Maximoff. Although Wanda and Vision first try to hide their superhuman powers (Vision quite literally changes his appearance to look human), the pair ultimately give up, realizing that no matter what they do, they fit in. Some children and grandchildren of survivors feel unable to “pass” and struggle to feel like they belong.

Wanda and the grandchildren of survivors 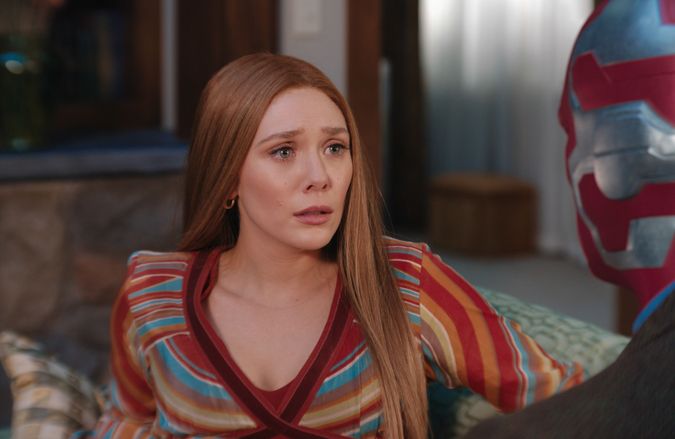 “WandaVision” coincides with a pivotal moment in Jewish history. More than half a century after the Holocaust, many survivors are gone, and their grandchildren are taxed with carrying the message: Never again. In fact, studies suggest that it is the grandchildren who experience and exhibit the symptoms of intergenerational trauma because their grandparents have bequeathed upon them their stories of survival and loss. Watching the first Romani (and possibly Jewish) female superhero is also watching her experience a version of what so many children and grandchildren of survivors experience every day.

Recently, the recall of intergenerational trauma enveloped the descendants of Holocaust survivors. In the days following the January 6th insurrection on the Capitol, many grandchildren took to Twitter expressing a desire to seek out a hiding place, withdraw money and ensure that passports were up to date. As the tweets started to collect, a wave of recognition bounced across the Twitter-verse with comments like “I thought I was the only one who did that!” and “Hello from London, same here!” Despite the pain the riot caused, there was a brief moment of recognition and of comfort. Impulses that had once seemed strange and isolating were actually part of a transcontinental pattern of the modern Jewish experience.

“WandaVision” offers a similar touchpoint of connection and identification.