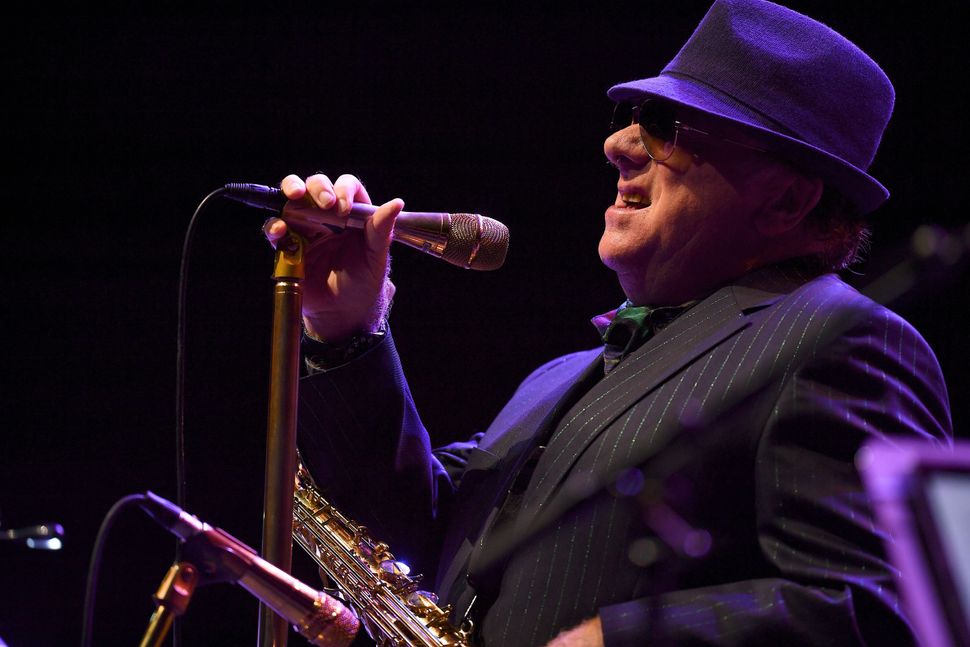 Van Morrison performs at the Americana Music Festival & Conference in Nashville in 2017. By Jason Davis/Getty Images

The lyrics of the song, “They Own The Media,” never indicate who the pronoun in its title refers to. But Morrison, a two-time Grammy winner, was also accused of antisemitism for the 2005 track “They Sold Me Out,” and throughout the coronavirus pandemic has been trafficking in conspiracy theories that frequently overlap with Jew-hatred.

The album raised eyebrows in March when its song list was revealed, including titles such as “Why Are You On Facebook,” “Big Lie,” and “Stop Bitching, Do Something.” On the website Stereogum, writer Tom Breihan called out “They Own the Media,” saying “it sure seems to be an antisemitic trope.”

“Maybe it’s satire,” Breihan wrote. “Maybe the “they” of the title doesn’t refer to any specific group of people. But when you consider that this man just went on a months-long COVID-denial tantrum, we have every right to be suspicious about this one.”

And on the website insidehook.com, Bonnie Stiernberg noted that “even if it’s not relying on old antisemitic stereotypes, the idea that any singular group of people ‘owns the media’ is a dangerous myth.”

Over the last year, Morrison, 75, has railed against stay-at-home orders, releasing a number of songs protesting coronavirus restrictions and calling social distancing pseudoscience. A native of Belfast, he accused the government of the United Kingdom of “taking our freedom.”

In “They Own The Media,” he sings, “They control the narrative / they perpetuate the myth / Keep on telling you lies / telling you ignorance is bliss.”

New 28 song collection coming from Van Morrison looks to be an assemblage of self-serving conspiracy theorist music. The man who once wrote Astral Weeks, Moondance, Wild Night & Brown Eyed Girl is now giving us the surefire spring bopper, Why Are You On Facebook. pic.twitter.com/QteP0saAek

Morrison — whose 1968 album “Astral Weeks” was ranked the 60th greatest album of all-time by Rolling Stone — denied back in 2005 that “They Sold Me Out,” in which he sings in first-person from the perspective of Jesus, was antisemitic. That song includes the lyrics: “For a few shekels more, they didn’t even think twice / For a few shekels more, another minute in the spotlight.” Morrison later said the song was about the plight of the artist in society.

The concept of Jews controlling the media dates back to the antisemitic text the Protocols of the Elders of Zion, which was first published in 1903. It was promoted by Nazi propaganda minister Joseph Goebbels, who said in 1933 that “The Zionist Protocols are as up-to-date today as they were the day they were first published.”

The new album, “Latest Record Project: Vol. 1,” is Morrison’s 42nd. It is scheduled to be released in full on May 7.

The full lyrics of “They Own the Media” are below.