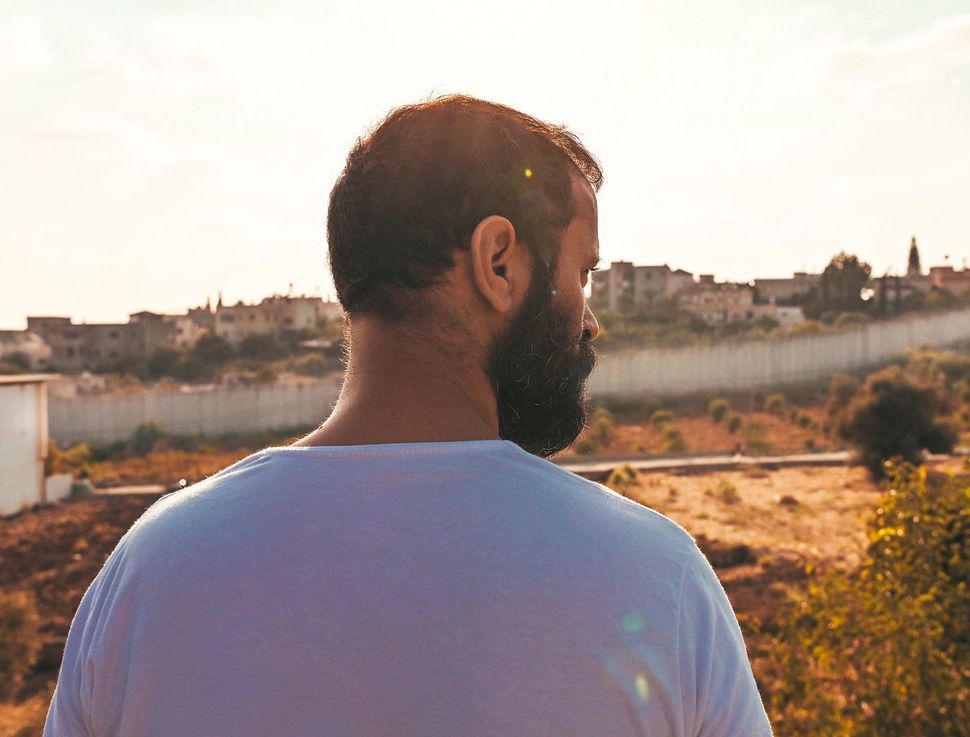 A still from “200 Meters.” Image by Alaa Aliabdallah

This is the nightly ritual that lies at the heart of “200 Meters.” Mustafa, the film’s fatherly protagonist, steps onto his balcony and flicks the light switch on and off. From their bedroom in a nearby apartment building, his three young children can see the lights flashing, and they eagerly reply in kind.

These two apartment buildings are separated by a short distance; their proximity gives the film its title. But between them lies the separation barrier Israel built in the early 2000s during the Second Intifada, a wall which has become a symbol of the occupation. Mustafa (Ali Suliman), lives in Tulkarm, a city in the West Bank. On the other side of the wall, his wife Salwa (Lana Zreik) and children are Israeli citizens. As a gesture of quiet protest against the occupation, Mustafa refuses to apply for residency in Israel, instead using his permit to cross the barrier and spend time with his family. It’s a system that riddles the family’s life with bureaucratic impediments but seems to sort of work — until Mustafa gets turned away from a checkpoint on the same day a car accident lands his son in the hospital.

What follows next, as Mustafa reluctantly boards a smuggler’s minivan, is a white-knuckle road trip that lays out the indignity of life under occupation. Most of his fellow travelers are construction workers who cross the barrier illegally as a matter of routine, but two new arrivals throw the trip into disarray: Kifah, an impulsive young man making his way to a family wedding, and Anne, his German (and, we slowly realize, Israeli) girlfriend, who is making a documentary about the trip. Anne’s naiveté about the stakes of their journey, and her hunt for “authentic” scenes of Palestinian life, put everyone in danger.

Director Ameen Nayfeh, who is making a polished cinematic debut with “200 Meters,” drew on events from his own childhood when making the film. Born in Tulkarm himself, he was a teenager when the wall’s construction cut him off from his grandparents’ village.

“I grew up in the situation, learning about what’s happening in my country: The oppression, and the occupation, and checkpoints, and checkpoints,” he said. “As a child I was standing on the balcony of our house and watching Apache helicopters. All these things started building up, and I decided that I wanted to tell stories.”

The film, which is part of the upcoming Human Rights Watch Film Festival, could not feel more germane in the current moment, amid escalating violence in Israel and Gaza. I spoke to Nayfeh on Tuesday, after Palestinians across Gaza, Israel, and the West Bank declared a general strike. They were protesting Israeli airstrikes in Gaza, the looming eviction of families in East Jerusalem’s Sheikh Jarrah neighborhood and mob violence against Arab Israelis.

Nayfeh couldn’t walk off the job — “I’m a freelancer, so I’m not working for anyone,” he said — but he hopes his work will contribute to a growing international conversation about Palestinian rights.

“I have a little bit of self-worth that I have a film talking about Palestine, and that it’s being shown,” he said.

We talked about Nayfeh’s journey to filmmaking, the challenges of making art in the West Bank, and his hopes for Palestinian cinema. The following conversation has been edited for length and clarity.

Irene Katz Connelly: You studied nursing before turning to filmmaking. How did you make that switch? 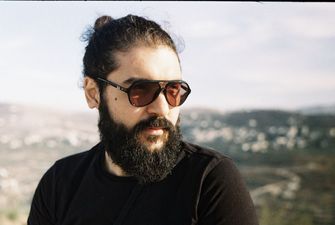 Ameen Nayfeh: My parents were against film, because back then we didn’t have a film school in the West Bank, we didn’t have an industry. The question was, “What are you going to do? How are you going to make a living?” In high school, we had a visit from a nursing college, and they said a few things that I thought might help me to study filmmaking: That you can work anywhere, because there is always a shortage of nurses, and that you can work at night. So I thought I could study and work at the same time. I graduated as a nurse, but then I went to film school in Jordan. I was lucky, I got a scholarship. That was the turning point in my life and that’s when I started “200 Meters.”

Can you tell me more about the personal history behind the film?

I am from the West Bank, but my mother comes from a Palestinian village that is now on the Israeli side. Before the wall was built, I was taking a taxi and going to my grandparents’ every weekend. I grew up in that town — and then suddenly you cannot go anymore, because it is out of reach.

When my grandfather was dying, we hadn’t visited them for four years. I received a call from my brother saying we finally got permits to visit him at the Israeli hospital. I was so happy — I went with my sister to get ice cream, because we were so happy. We made it to the crossing gate at 6 p.m., we had our permits with us, but the soldier was telling us to come back tomorrow, because it was closed. My brother said, “We have to go right now, because my grandfather is dead.” I looked at my sister, and we agreed that my brother was lying, he was maneuvering to get us past the checkpoint. After he heard this, the Israeli soldier looked at the permits and let us through — he’s a human being. But it ended up being true. My grandfather did die, and I knew at the checkpoint.

What are the challenges that come with shooting a film in the West Bank?

It was very difficult. I was very stubborn. I wanted to shoot next to the checkpoints and at the wall. These areas are controlled by the Israeli military, and you have to get a shooting permit from the military. So we decided to act very fast and in small units. The film, without these images, would not have had the same impact. I didn’t build any sets except the interior of the checkpoint where the workers are passing into Israel.

We had one situation when we were traveling to take some shots on the street, and we were driving past a checkpoint and got stopped because the camera was rigged in the car in a weird position. During the questioning our producer, who was driving behind us, stopped in front of the checkpoint and left the car and started walking toward the soldiers. She did not think with her mind, because that is very dangerous. We noticed that they were looking at her with their guns and shouting and then we started to shout that she was our producer. In that moment my heart beat, because in such such situations, if they fear danger they shoot.

”200 Meters” highlights the ecosystem of profiteering around the separation barrier — for example, competition between different smugglers who “control” different crossing points. Why was it important for you to show that?

I wanted to be as authentic as I know how, to give a glimpse of life for a man who just really wants to be with his son. In Palestine, we are oppressed, but we are also oppressing each other, because the situation gives some people the chance to exploit others.

I was fascinated by Anne, the filmmaker documenting the life of her boyfriend, Kifah. Anne sympathizes with the men trying to cross the wall but also endangers them by filming the process. Is her character a critique of foreigners who parachute in to tell Palestinian stories?

Yes, it had this angle, but also many other layers. For example, they’re always asking her if she’s working with the Mossad, if she’s a spy, who she is. I wanted to play with her acceptance in the group, which keeps changing depending on what they know about her background.

It’s interesting that Mustafa, the protagonist, is the only person who doesn’t judge her like that, even when he discovers she’s been hiding the fact that she’s Israeli.

Mustafa is older than the others, especially Kifah, the one who gets upset when he finds out that Anne speaks Hebrew. Mustafa is in his 40s, and he’s been working on the Israeli side for 25 years. Kifah, who is in his 20s, doesn’t know anything except the wall and the checkpoints. He doesn’t know any Israelis except at checkpoints.

And this happened with me, actually. I was at the [film festival] Berlinale Talents and we had a matchmaking event to meet other filmmakers. I was speaking with this man who asked where I was from. I said “Palestine,” and he said “I am your neighbor.” I told him it was the first time in my life I was having a conversation with an Israeli guy who’s not holding a gun. This is the reality for my generation.

You mentioned that the West Bank doesn’t have an established film industry. What would you like to see change in the future?

I would like to see a national film fund that would help us make our films. In Palestine, we struggle to tell our stories, while on the Israeli side they have the Israeli Film Fund. In many of the films they produce they tell a Palestinian narrative, which for me is not OK. I have to tell my story. We have amazing filmmakers, amazing projects, but we lack the infrastructure.

Are you working on any new projects now?

I have a new idea in development. It’s a story about a boy who is growing up and failing to connect with the world around him, only connecting with his smartphone. And suddenly he has to spend the summer in his father’s village in the south of Jordan, where he meets an older man who becomes his mentor. It’s a universal story, a coming-of-age tale.