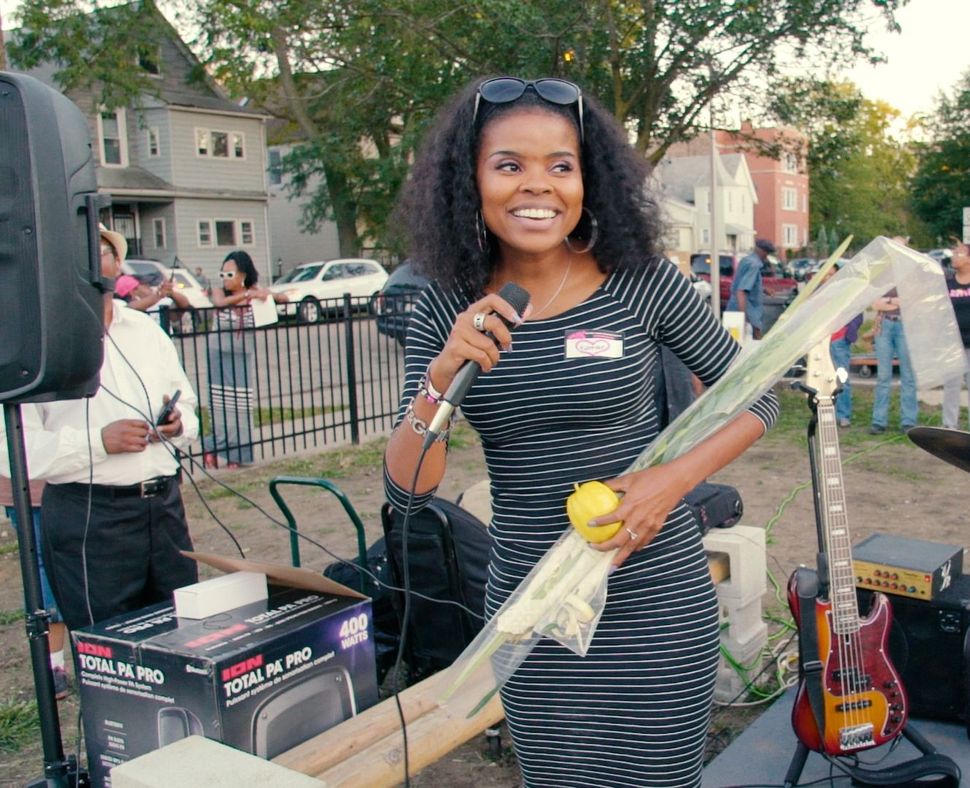 Tamar Manasseh, subject of “They Ain’t Ready For Me.” Image by Brad Rothschild

Tamar Manasseh, the mother of two teenagers, remembers hearing about another young mom who had been shot and killed while attempting to break up a fight in broad daylight.

Manasseh decided to take matters into her own hands by setting up shop — literally sitting on the corner of 75th and South Stewart Avenue in Englewood, precisely where that other mom was killed. Manasseh thought that maintaining a constant presence could be the first step in diffusing the escalating gun violence in a community awash in poverty, unemployment, drug abuse and gang activity.

Within a few days, others — both women and men — joined her, setting up lounge chairs and sitting alongside her every day throughout the summer of 2014 in the late afternoon and early evening. They served as watchdogs, mentors and mediators, and they also provided dinners free of charge to anyone in the community who wanted one.

Six years later, more than 200 meals are prepared daily and Manasseh’s grass roots organization, “Mothers and Men Against Senseless Killings” (MASK) is gaining traction (financial contributions, volunteers, press coverage). It has been credited with the plummeting violence in Englewood.

In one instance, Manasseh prevented one teenage boy from killing another. “We talked to the boys, they listened to what we had to say, and they calmed down,” she said. “We need more moms, not more police.Their being on the corner is inflammatory. The people are scared, the police are scared, everybody is scared, and then somebody gets shot.”

Asked if she’s ever had any near misses, she says every day of her life is a near miss. “That’s how it works for Black people,” she said. ”Even if you’re in a safe community, the community may be safe but that doesn’t mean you are. It’s a constant level of awareness of what can happen. I can’t save my kids. I can’t save myself either.” Manasseh is a former rabbinical student, who keeps a kosher home and speaks some Hebrew. She observes the holidays and both her children were bar and bat-mitzvahed, respectively. She says she does not identify with any particular denomination. “I’m just a Jew,” she said. “And I’m a Black woman in America.”

Manasseh’s multi-layered identity, fierce determination and personal charisma are all captured in the new documentary, “They Ain’t Ready For Me,” which will be released on June 25th through JCC’s virtual theater. Produced and directed by Brad Rothschild, it explores Manasseh’s daily struggles as she doles out meals, chats with her friends, instructs children on how to negotiate disagreements, and in one instance, sets up a tent on a vacant lot for a communal Passover celebration where local residents who are not Jewish prepare matzo ball soup for the annual Seder.

“I wouldn’t be doing what I’m doing if I wasn’t a Jew,” she told me. “Being Black tells you something should be done. Being Jewish tells you it can be done. Being human brings it together and it gets done. Jewish belief says ‘this is broken. I see that it’s broken. It’s for me to fix it.’ If I didn’t know that I am commanded to fix things I probably wouldn’t be doing it.”

Manasseh’s mother was Jewish and enrolled her in Akiba-Schechter, a Jewish day school. She regularly attended Beth Shalom B’nai Zaken Ethiopian Hebrew Congregation, which she dubs a “Conservadox” African American synagogue. Women don head coverings, do not wear pants, and cannot become rabbis, a source of contention between Manasseh and the hierarchy in her temple.

She matriculated at the Israelite Academy, (an African-American Jewish seminary) with her sights set on breaking that glass ceiling. She wanted to be a role model for Black Jewish girls including her daughter who was well versed in Torah and was the only Black entrant in international bible competition for orthodox Jews.

“But she can’t cook and that’s a problem in a community where girls are brought up to be wives and mothers, but not rabbis,” Manasseh said. “And that’s when I decided to be a rabbi. I wanted to make sure that door would be open to her if that’s what she wanted to do.”

Although Manasseh completed all her course work and requirements she refused graduation because it did not come with ordination. Also, her own sense of what it meant to be a Jew had shifted from formal classes and shul attendance to a community centered activism, which she contends is the true expression of Judaism.

“I’m practicing Judaism on the corner,” she said. “You can’t see God’s work in the world unless you’re doing it. You see the hand of God through yourself in the work that you do.”

Still she acknowledges that there are very real pockets of anti-Semitism in the Black community. “Some feel such a kinship for Christianity that to be a Jew is an affront to them as Christians and an added assault to them as Blacks,” Manasseh said.

But thanks to her communal work, she says that her neighborhood has come to see Judaism in a new light.

“That’s why Jews don’t have to proselytize,” she said. “Jews don’t need to recruit. People will find you. They’ll say, ‘If this is what Judaism makes you do what you do, I’m ok with it. I want to know more about it.”

Manasseh’s community has gravitated towards the collective holiday celebrations she hosts. For them, the appeal of Sukkot, Passover and Yom Kippur forge connectivity both with each other and their lost family members. At Yom Kippur, the shofar is blown to commemorate loved ones who were killed by gun violence; their names are read aloud by volunteers.

According to Manasseh, the concept of atonement also resonates. “You can be forgiven for the things you have done in the world,” she said. “You can change. You are not outside redemption.”

Though she does not believe the future of religion exists in houses of worship, she nonetheless says she would like to see Black Jews (also Asian-American and Latinx-American Jews) more welcomed in synagogues. She herself has experienced some discrimination among Jews who may not fully believe she’s Jewish or just feel ill at ease in her presence or disconnected from her without in any way viewing themselves as racist.

“We’re not used to being in the same space and fears are ingrained,” she said. “Someone new comes into your niche and you may react in ways that you’re not.

So, what’s next on her itinerary?

In addition to MASK duties, Manasseh’s attentions are centered on an online “study-buddy” tutorial program. She’s also played a significant role in building a private neighborhood school whose function will ultimately be determined by need. It may be an elementary school, a trade school, or a community based learning center whose goal is to make sure its students meet certain hallmarks of achievement.

“This woman is a force of nature, a force for positive change,” says Brad Rothschild, who produced and directed “They Ain’t Ready For Me.” “She’s a testimonial to the idea that everyone can do something.”

The scene in the movie that most haunts him (and Mansseh) takes place at the end when she travels from Chicago to a South Carolina cemetery, the resting place of her ancestors, the children and grandchildren of enslaved persons. She comes to pay tribute to their sacrifice and contribution to her life. As she looks at the headstones dating back more than 100 years the presence of ghosts is palpable.

Manasseh says they’re always with her, informing her motivations, ambitions and resilience. She knows that so much is invested in her. She owes it to them to be somebody.

Simi Horwitz won a 2018 Front Page Award from the Newswomen’s Club of New York for her Forward story, “Ruchie Freier: Hasidic Judge, American. In 2019, she received a first place prize from the Los Angeles Press Club for “Reviews-TV/Film, All Platforms,” at the Southern California Journalism Awards.