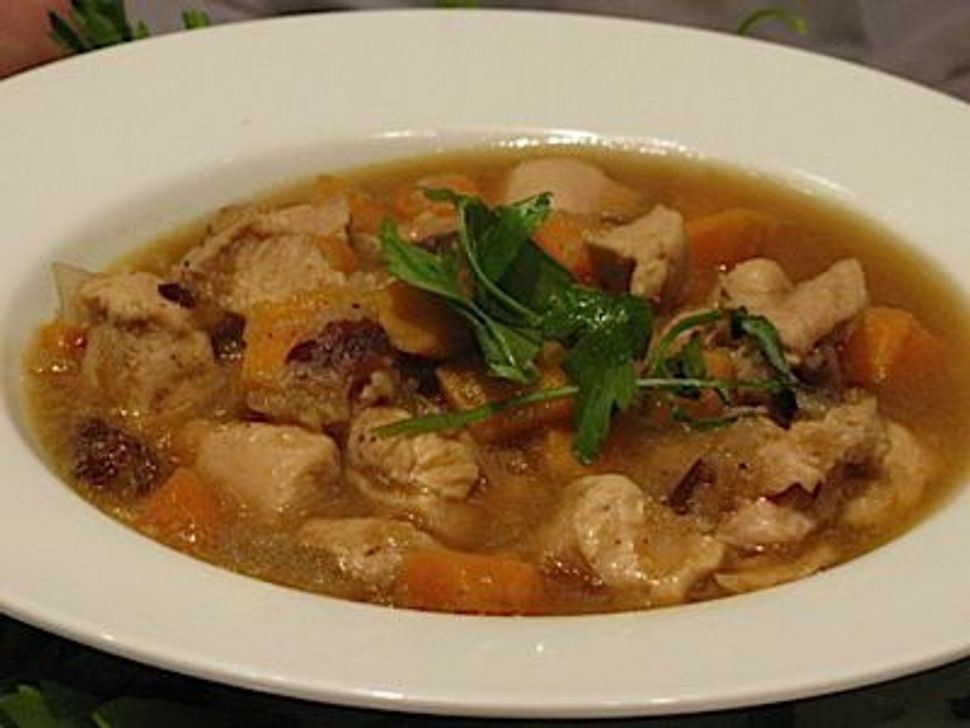 Last month on JCarrot, Renee Ghert-Zand uncovered shul cook-offs from New York to the Deep South — whether it’s BBQ, brisket, cholent or holiday foods, Jewish cooks are facing off in fierce and friendly food contests like never before. So one might expect that the mother of all of these, the Man-O-Manischewitz Cook-Off, which bills itself as the only national kosher competition, would focus on Jewish food. But in a surprising way, this year’s contest didn’t.

Last Thursday five contestants, their family and friends and a panel of celebrity judges, including Jacques Pepin, gathered at the Manhattan JCC for the heated competition for the grand prize, $25,000 of cash and new kitchen appliances.

The contestants were chosen out of 3000 applicants for their recipes, which had to incorporate two Manischewitz products, one of them being the company’s line of All-Natural Broths, and had to call for nine or fewer ingredients total. We were “looking for family friendly recipes,” Stacey Bender, whose PR company organized the event, said.

The dishes which ranged from a light fisherman’s stew made with cod, to a Japanese inspired egg and chicken donburi and a shallot smothered chicken took a noticeable sidestep from traditional Jewish foods. Perhaps, in large part, because three of the five finalists were not Jewish and neither was the head judge, legendary chef, cookbook author and TV personality, Pepin.

When asked if he was concerned about his knowledge of Jewish food and his role as a judge, Pepin responded, “taste is taste, presentation is presentation.” Pepin said he would be “looking for creativity and taste — mostly taste.”

Event guest and JCarrot writer Itta Werdiger-Roth keenly observed that the dishes, four of which focused on boneless-skinless chicken breasts, seemed to represent food that “Jewish people can connect to [but] with a twist.”

The most traditional tasting dish, a golden sweet potato tagine, was coincidentally prepared by a non-Jewish contestant, Jeanette Nelson. An unintentional riff on tzimmes, the dish’s sweet flavors came from honey, sweet potato and dried plums, though with a touch of Garam Masala, it strayed slightly from tzimmes’s Eastern European roots.

The winning dish, a chicken and egg donburi, a rice based dish flavored with soy sauce and mirin and garnished with pickled daikon was prepared by Stuart Davis, the lone male competitor. “This is Japanese comfort food,” said Davis, who learned to make the dish during a four-year stint in Japan.

Judge and director of culinary arts at the JCC, Jennifer Goren wasn’t surprised by the recipes presented. “Jewish food influences [other] cuisines and vice versa. Jews around the world eat local food,” she commented. “Manischewitz is looking for younger hipper audience and that audience is interested in ethnic cuisine,” Goren added.

Guests, who also had a chance to sample the recipes prepared by a catering company, were taken with Davis’s donburi. Doris Latino, assistant in the JCC’s culinary program, said it was her favorite and commented “the donburi is so unusual.”

The company was also not surprised by the recipes. Paul Bensabat, president of Manischewitz, emphasized “only 15% of kosher consumers are Jewish.” While that may be the case, the blend of donburi and Manischewitz, whose sweet wine graces nearly Shabbat table in America, seemed slightly incongruous. But considering a recently Japanese Jewish bake sale at a San Francisco day school, perhaps its not as odd a pairing as we may have thought.