A Shabbat Potluck Amid the Protests and Shouting 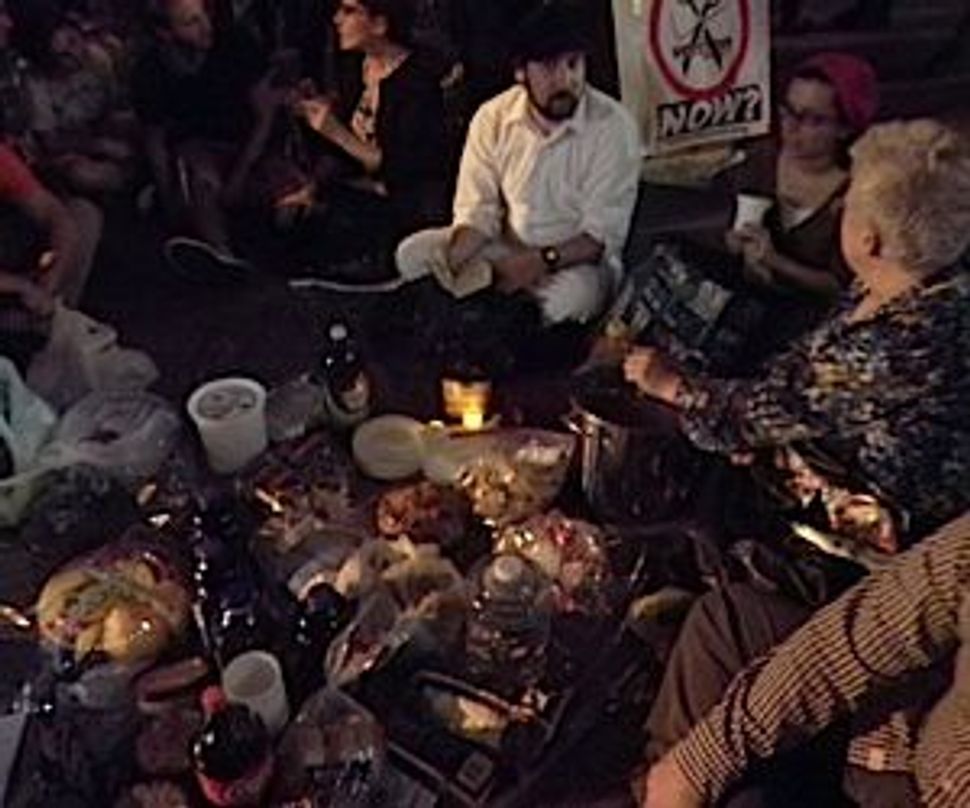 While Sabbath is a day of rest, some prefer unrest. Dan Sieradski, a new media activist, organized a Shabbat dinner last Friday amid the hubbub of the Occupy Wall Street protest taking place in Lower Manhattan.

Around 20 gathered in a corner of Zuccotti Park to welcome Shabbat, not far from the din of protestors and the soft “ommmm” of a few people meditating.

A couple of hours before Shabbat, Sieradski, 32, sent messages on Facebook and tweeted: “This is what shabbocracy looks like,” inviting Jews and non-Jews to join him.

As a group of ten carrying food formed, Aharon Varady, a Jewish educator who conceived of an initiative called the Open Siddur Project, led the singing of “Shalom Aleichem,” welcoming the Sabbath. Some raised their hands into the light rain in place of the ritual washing of hands. The supply of food grew as the evening went on: Welch’s Grape Juice, kugel, challa, tuna, grapes, as well as vegetarian chili in a large silver pot were placed inside the circle. “Absent entrees… it was all there,” said Sieradski. Honey cake, for Rosh Hashanah, also lay in the circle.

Offering what he called a “modern midrash,” Charles Lenchner, applied examples from Jewish history to the protest.”Wall Street is the modern Goshen,” said Lenchner, referring to the biblical name of a part of Egypt. “We need a Moses to lead us away from slaving for the Pharaoh, keeping the system of oppression.”

Lenchner, who co-founded Organizing 2.0, an organization that that assists activists and the labor community in using online resources strategically, said in every social justice movement, there is a special role for the Jews, “and today, we’re the ones.”

Marisa James, a Reconstructionist rabbinical student, who was seated next to cantorial student, talked about combining Judaism and activism. She said having Shabbat dinner by the protest was an example of “doing Jewish” at a demonstration. The protests, she said, involved a “sense of communal responsibility.”

Others, like Elana Levin, said the Wall Street protest was “about community building rather than confrontation.” Levin, who has worked for labor unions, claimed the dynamic of the protests will change when unions and other groups join the protest later this week.

For Sieradski, the event was a family affair. His wife Ris Golden-Sieradski, who is a Jewish day school teacher, was there. “I want to stand by with people who are having a hard go of things,” she said.

Jeanette Friedman, Sieradski’s mother, who is herself currently going through bankruptcy, also joined the circle. With an extensive history in activism including protesting the Vietnam War and supporting the women’s movement in the 1970’s, the long-time Jewish communal professional said, “I’m here because I’m fed up.”

Two hours into the Shabbat celebration, just before heavy rain came, activist musician David Peel joined the circle, and began to sing music from “Fiddler on the Roof.” Sieradski later put a link on Twitter of Peel performing “Hippie from New York City” with the help of the Lower East Side Band as well as John Lennon and Yoko Ono.

Others elsewhere milling around the park could be seen listening to drums or some fervent orator, while enjoying bread and pasta and downing cups of water drawn from plastic barrels. There has been a lot of pizza served down at the protests, leading some humorously to call the protest “Occup-PIE Wall Street.”

But as often happens with protests, there come times when there is some friction among those involved. A couple of people were piqued with Sieradski for not coordinating the culinary activity through the main communal food pantry and instead organizing his own meal separate from the other protestors.

“This was our autonomous action in solidarity,” a defiant Sieradski said. He added that he found it ironic that at such a decentralized protest, some were criticizing independent, self-determined activity. Still he hopes to have future Shabbat meals coinciding with the protests. “After Yom Kippur, the Shabbat dinner could become a routine thing,” said Sieradski. “This is the second Shabbat since the protest began. Then, who knows?”

A Shabbat Potluck Amid the Protests and Shouting