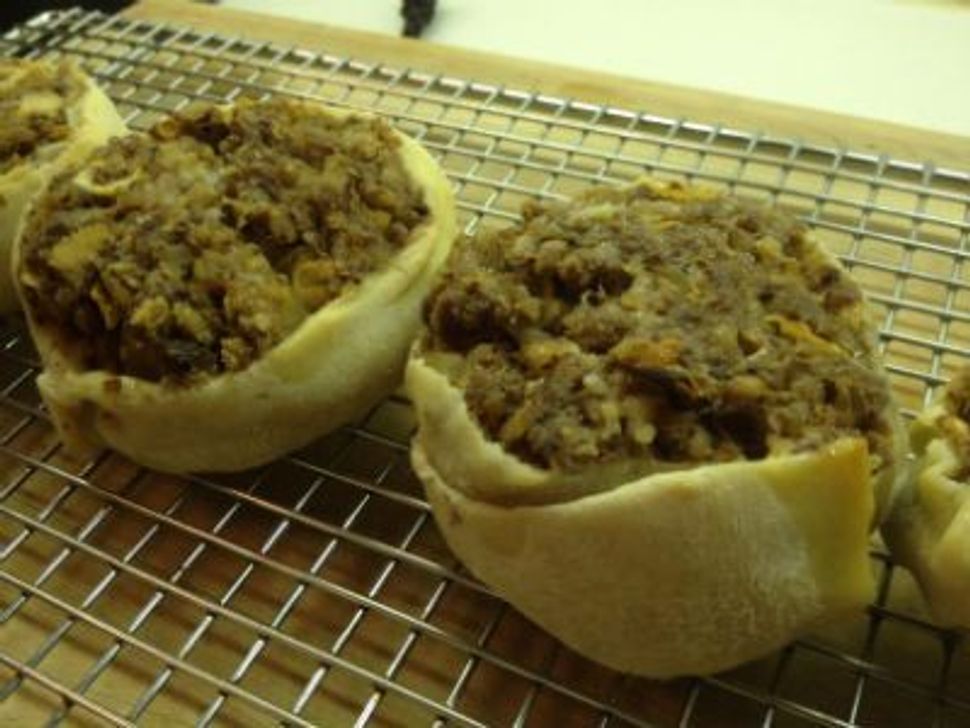 “A knish is basically a dumpling,” Noah Wildman said, when I interviewed him for the Jew and The Carrot in November. “You can pretty much put anything in it.” Noah was explaining some of the unconventional ingredients, like chocolate hazelnut and spiced pumpkin, he had used to stuff a line of knishes for his Knishery NYC debut.

When I read Julia Moskin’s article “Lucky to be a Leftover” earlier this month, about ways to repurpose leftover holiday meats, my mouth watered at the mention of a brisket knish — soft dough, surrounded by oniony potato and stuffed with succulent tender brisket — it seemed all the best parts of a Jewish grandmother’s kitchen combined into a single bite.

Like most people, I love leftovers. They’re delicious homemade foods that I have already cooked and cleaned up after. But no matter how tasty the original meal, eating the same dishes over and over can get boring, especially with meats like brisket, which can become dry after being warmed too many times. What a great way to reuse that meat, creating an entirely new meal and ensuring that the brisket doesn’t end up drying out in the back of the fridge.

I knew Noah Wildman was my best shot at tasting such deliciousness, so I called to ask if he’d be willing to come up with a recipe. Noah set about consulting cookbooks, searching for the perfect combination of ingredients and technique. What he found surprised him.

“Meat knishes usually contain some kind of offal,” he said, and most of the recipes he found called for lung. But because he was unable to find that particular cow part in any of the markets he visited, he used tripe instead. (Though Noah strongly cautioned against skipping the tripe, he offered a few suggestions for substitutions, like textured vegetable protein, or sautéed Portobello mushrooms, in the “Cook’s Notes” at the end of the recipe.)

Also, all the recipes called for the cooked meat to be ground. “That’s just not something I’ve done in my culinary career,” he said, referring to both his formal training at the Institute for Culinary Education and his restaurant work.

There was an added benefit as well. Back in the old days, lots of Jewish grandmothers ground their own meat, using cast iron machines that have since gone out of favor. “But grinding up pre-cooked brisket,” he said, “using my Kitchen-Aid attachment to develop a traditional recipe, I feel a real connection to my Bubbe.”

1) Simmer tripe for 2 hours in salted water. While simmering, cook kasha according to box’s directions (1 cup uncooked makes about 3 cups). Sautee onion in shortening with a little salt over low to medium heat until brown and soft, about 30 to 45 minutes.
2) Chop brisket and tripe into small pieces, then run through grinder with large hole dye once. Combine ground meats with kasha, onions and eggs, season to taste. Refrigerate until ready to use.

1) Preheat oven to 350.
2) Using a rolling pin, roll out the dough on a level, floured surface, generously coating the dough with flour to prevent sticking to the surface or the pin. Roll into a large rectangle.
3) Deposit a line of filling in a log shape. Roll up like a big cigar. Using a bench scraper or large knife, cut into 2” segments. On each segment, tuck the dough under to cover one side, leave the other side open.
4) Places knishes on a parchment lined baking sheet, open side up. Brush each with egg wash. Bake for 40-45 minutes, under crust is golden.
5) Serve hot or at room temp. Holds in fridge up to 4 days, in freezer for about a month.

• If you have it, replace the shortening with schmaltz for a more traditional flavor.
• As tempting as it may be, do not skip the tripe. Mildly flavored organ meats have been used in meat knishes, as well as other meat-based dumplings like stuffed cabbage, derma and pierogies because its soft texture lightens up the otherwise dense and crumbly brisket.
• If you must skip the tripe, or simply can’t get a hold of it, you have a few other options. Any mild organ meat will work (but not liver, as it has a strong taste). Alternatively, you could use ½ lb of textured vegetable protein, or three Portobello mushroom caps, finely minced and sautéed in oil until soft. Be sure to add it into the grinder with the brisket so it is uniformly mixed.
• I used whole granulation kasha, as its big grain size matched nicely against the size of the meat grind. Common substitutions are mashed potatoes or cooked rice, but I prefer the earthy barley flavor of the kasha as an excellent pairing to the meat.
• If you cooked your brisket via braising, reserve the braising liquid to cook the kasha or rice instead of just plain water, it’ll give you a much bigger flavor that’ll compliment the meat.