Debates: Should Foie Gras Be Banned? 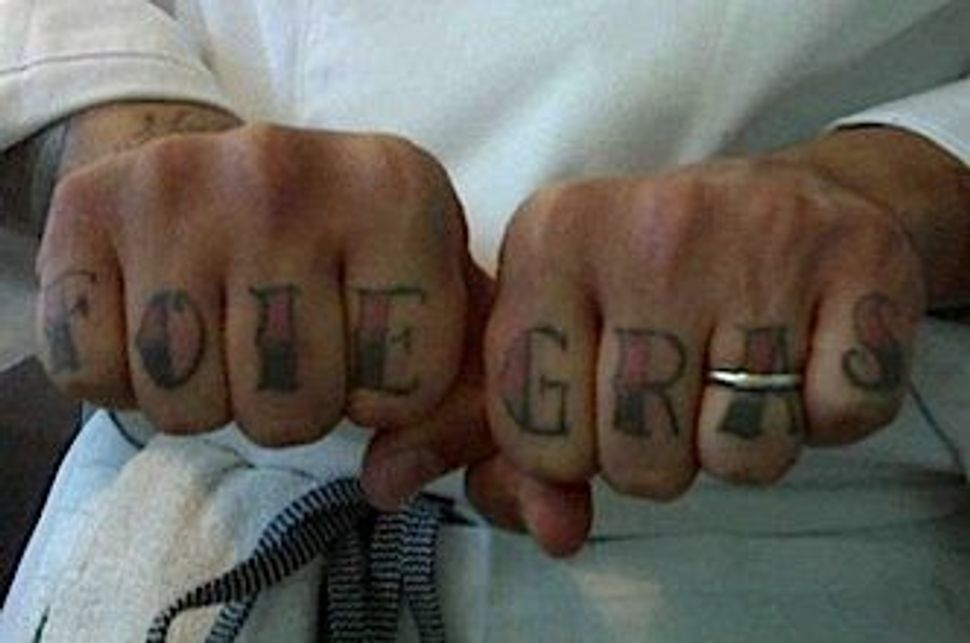 It’s not only the humble hot dog getting a grilling in the media these days: a much fancier Jewish food has been making headlines and igniting the passions of foodies and lawmakers alike. Is it a killer kugel? A rogue rugelach? Or a fiendish…foie gras?

Yes, the delicacy of pate made from fatty bird liver, which as of yesterday is banned California (after a seven-and-a-half year grace period passed after a 2004 law), is thoroughly Jewish, says Michael Ginor, acclaimed chef and author of “Foie Gras…A Passion.” “Duck and goose fat made a good substitute for pork,” says Ginor, who is also the president of Hudson Valley Foie Gras in Ferndale, New York.

The rich foodstuff is practically synonymous with luxury, a perennial favorite of gourmet chefs that’s singular in its sumptuousness. “It’s unlike any other animal product that I know of,” Jon Shook, owner of the Los Angeles restaurant Animal, told the New York Times. “We’re working on dishes to replace it, but you can never really replace foie gras.” Still, not everyone’s so eager to tuck in to the treat. To produce the highly-sought-after enlarged liver, geese or ducks must be force-fed for the last days of their lives leading up to slaughter. The process — called “gavage” — has long been a lightning rod for the ire of animal-rights activists, spurring California lawmakers to push for a statewide prohibition the on production and sale of foie gras.

It’s not just a modern — or secular — controversy, either. The discovery that waterfowl could be overfed to produce a richer, fattier liver goes back to the ancient Egyptians, who were stuffing their birds’ stomachs as early as 2500 BCE, and passed it to the Greeks and Romans.

Though it fell out of fashion elsewhere, the fattened liver remained popular with Jewish cooks, and it was a group of Italian Jews who reintroduced it to Europe in the Alsace region of France in the 11th century, according to The “Encyclopedia of Jewish Food.” As the Ashkenazi preparation of broiled and chopped liver gained popularity as the Alsatian dish foie haché (literally, chopped liver), rabbinic authorities began to question the animals’ welfare. However, after judging that the relative hardness of the fowl’s gullet made the process minimally painful, religious authorities allowed the overfeeding. Later, foie gras would even become one of the first products exported from the state of Israel after its founding in 1948.

It was there, while serving in the Israeli Defense Forces in the 1980s, that Ginor first encountered this “great product,” and shortly afterwards partnered with Izzy Yanay, a pioneering Israeli producer of foie gras, to found Hudson Valley Foie Gras in 1989. In Israel, Yanay had begun to use a hybrid breed of duck that was more disease-resistant, allowing for vertically integrated production where all steps, from feeding to slaughter, could occur on one site with the hardier birds. Today, at Hudson Valley, the birds are cage-free and hand-fed three times a day, with one feeder taking care of every 300 ducks to ensure lots of human contact. The end product is both prized and pricey — one-pound will run you a cool $40 online.

In the future, the company hopes to develop a facility for production of kosher foie gras, something which “we’ve wanted to do for a long time,” Ginor says. In modern production, foie gras can be considered kosher under the correct rabbinical supervision if an inspection of the bird’s esophagus after slaughter reveals no blemishes, holes, or scars to indicate any suffering during its lifetime. But even without kosher certification, Ginor insists that his methods sustains the welfare of the animals. “There’s no question that the duck on day 28 of feeding is not as happy as a duck that hasn’t been fed,” he said earlier this year, in response to a lawsuit over the use of the word “humane” to describe another chef’s menu item prepared with Hudson Valley’s products.

As for the no-foie-zone in California, police officials in Los Angeles and San Francisco reported Tuesday that they have “no plans to enforce” the $1,000 citation fee. Many chefs are stubbornly doling out foie-centric fare, offering it up for free as a side dish or with a “foie-kage” (think corkage) fee to slide through loopholes. Ginor is optimistic as well, saying he expects “a good chance of overcoming [the ban] with litigation.” If the past is any indication, he could be right. In 2008, Chicago city council members overturned a similar ban after almost two years of outcry from chefs. Whatever happens, don’t expect the wild goose chase to end without a fight: “Some [chefs] may stay away, but others will challenge,” says Ginor.

Debates: Should Foie Gras Be Banned?