The Best Kosher Pop-Ups, BBQ Contest and Things To Eat this Summer 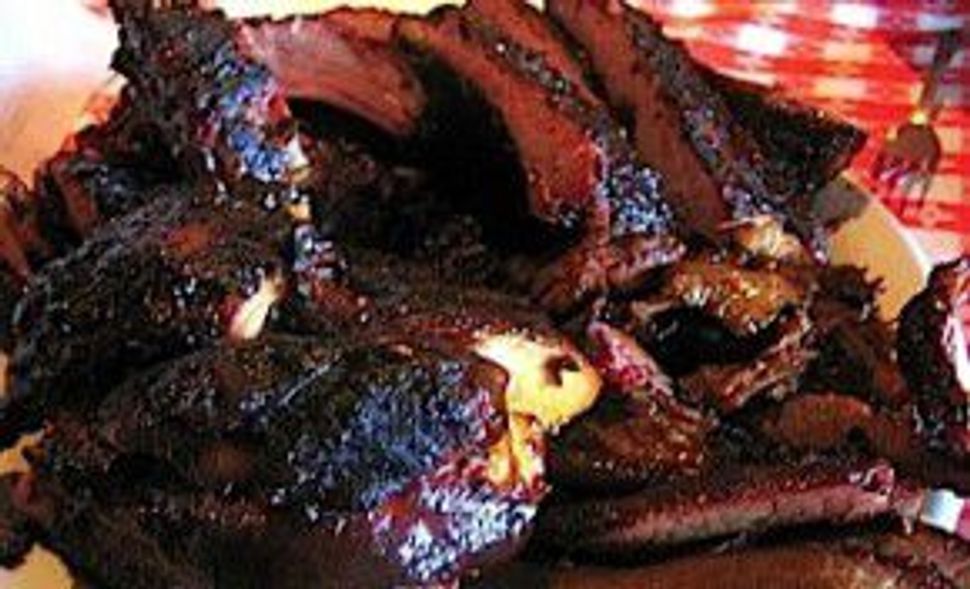 Hakadosh BBQ Pop Up Truck offers kosher diners a taste of what Southern barbecue is all about. Image by Courtesy of Ari White

Wondering how to fill the balmy days ahead? We’ve rounded up some of the most exciting Jewish food events from around the country to keep you going during the warmer months. From New York to Los Angeles, and even as far as London, it’s going to be a delicious summer. Think hefty (kosher) BBQ ribs, hand-rolled couscous and merguez burgers — yum!

Ari White, the grill guru behind Hakadosh BBQ, is bringing his Texas ribs to pop up locations across New York City and as far as New Jersey and Pennsylvania. Here’s a handy list to keep track of locations and dates, or follow White on Twitter at @HakadoshBBQ for up to the minute updates. Hat tip to Yeah That’s Kosher

If you think Jewish cooking is all about gefilte fish and kugel, you should get in on NY Shuk’s — which means market in Hebrew — Middle Eastern Shabbat Supper. Chef Ron Arazi and pastry artist Leetal Arazi will show you how to make hand rolled couscous, tanzeya (a dried fruit and nut stew served with melt-in-your-mouth lamb) and a medley of salads. Because no Shabbat meal tastes as good dry, participants will also get to create a cocktail with arak, the popular Middle Eastern anise-flavored alcohol.

All this “Great Gatsby” talk has us dreaming of some jazz-era ambiance. The Brooklyn underground supper club is teaming up with Side Tours New York to offer a three-course organic seasonal vegetable and fish-based kosher meal with live music and drinks straight out of Prohibition.

This Jewish Chicago pop up dinner club is celebrating spring with a six-course tasting menu that includes smoked venison, fresh corn panna cotta, fresh herbs and produce. Spots are first come first served. Email rimonchicago@gmail.com by May 13 to save your spot!

The Gan Project wants you to get back to the farm. The social and environmental justice organization grows organic heirloom produce on a quarter acre farm in West Rogers Park, Chicago. Half goes of the produce goes to the community, and half is donated to local food pantries. May 19 will mark their second Chag HaBikkurim — first fruits festival. There will be music, chef demonstrations, and gardening activities. Go get your hands dirty!

The Israeli coffee shop is opening its 10th U.S. location since 2006, and its fourth in the Sunshine State. In case you’ve never been (and if that’s the case, you’re missing out) here are some of our favorite treats to look forward to: Halumi Salad (chopped salad with halumi cheese, served with lemon olive oil dressing), Halva Pastries, and Warm Garbanzo Salad (chopped salad with garbanzo beans, hard boiled egg, homemade garlic croutons, tahini sauce and parsley dressed with lemon olive oil).

This annual kosher fest features goodies from local restaurants such as Burntwood Tavern, Giovanni’s Ristorante, Grovewood Tavern and Wine Bar, Jezebel’s Bayou, The Black Pig, the Melting Pot and Rockefeller’s. All food preparations are supervised by a kosher supervisor. Hat tip to the Cleveland Jewish News.

Granted, this isn’t in spring or summer, but it was too good to pass up. Heard of Memphis in May? Well, this is the kosher version. Last year, 40 teams competed for the title of rib-master and more than 3000 people showed up to eat the results. If you’re not comatose from all that food, the congregation also hosts a basketball tournament — a great way to burn off those calories and go back for more.

This Hollywood counter is the Israeli burger joint’sfirst U.S. location. What makes these patties special? Smaller portions for one, with flavors ranging from Kobe beef, to Ahi tuna and merguez. And let’s not forget the sides. Moroccan-dusted onion rings? Sounds deeelish.

This yearly festival celebrates the best of British Jewish food, bagels, challah, cheesecake and all. With speakers, workshops and an Ashkenazi vs. Sephardi cook-off, this promises to be a tasty outing — and maybe even worth a trip across the pond.

The Best Kosher Pop-Ups, BBQ Contest and Things To Eat this Summer