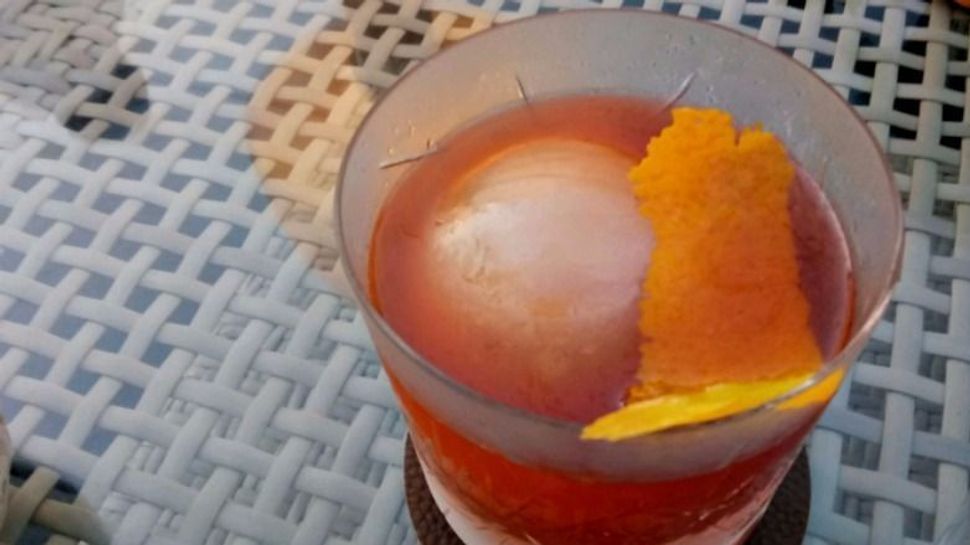 The Jerusalem Gold cocktail at the Waldorf-Astoria, Jerusalem. Image by Linda Gradstein

The Garden Terrace on the roof of the Waldorf Astoria Hotel in Jerusalem feels like another world, not a bad thing these days. The setting is enchanting, with rattans sofas and chairs separated by trees strung with fairy lights. It’s a beautiful place to relax and enjoy the cool Jerusalem night air. The wait staff even offer shawls if it gets too cool as the winds pick up.

The signature cocktail, called “Jerusalem of Gold” is based on Havana Club 7 rum, a light vanilla-scented rum imported from Cuba.

“We take a lowball glass, spray it with a few sprays of anise,” Zoe Yassky, our waitress originally from Connecticut told me. “In a shaker we have some maple syrup, some Havana Club 7, and some lemon juice. We mix it all together and add some ice. We take the drink and put it into a chamber with some cinnamon smoke so the drink catches some smokiness. We bring it to you, release the smoke and let you enjoy it.”

As the bartender lifts off the cover, now filled with cinnamon smoke, you feel like you’re watching a magic trick. 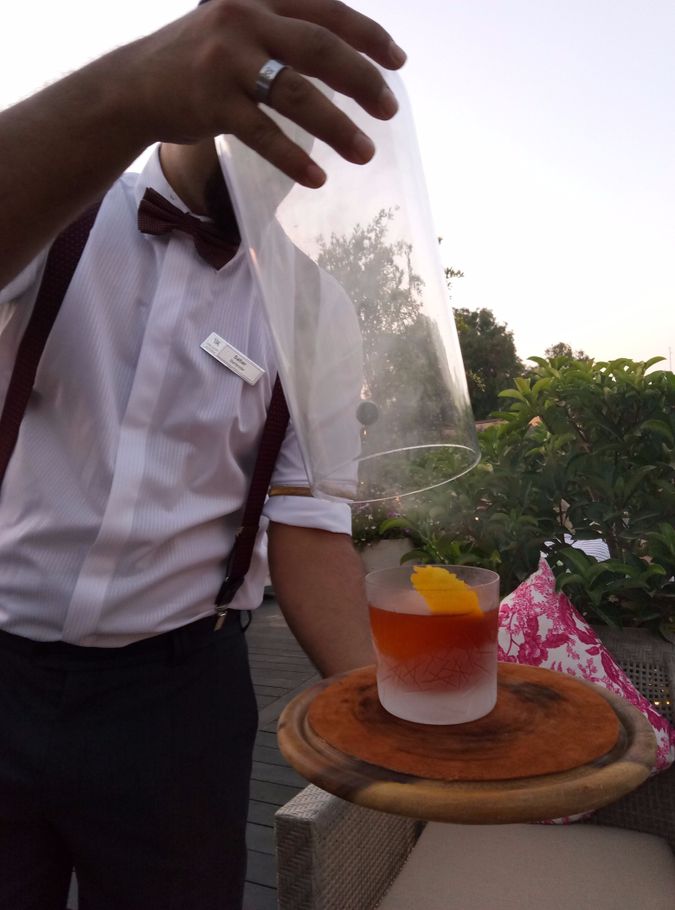 The result is a sweet and slightly spicy drink, similar to the city after which it’s named, perfumed by the cinnamon smoke and orange peel. Instead of square ice cubes, the drink has one large round ice ball in the middle, engineered to melt more slowly, and therefore have less effect on the composition of the cocktail.

If you’re hungry, there is a kosher tapas meat menu, with the dishes ranging from 40 – 60 shekels ($11 – $16). My companion and I tried several small plates, including beef carpaccio, tempura cauliflower, slow-cooked veal cheeks, and slices of juicy rib-eye steak. Portions are small but the dishes were perfectly cooked.

The cocktails are pricey. The Jerusalem of Gold is 86 shekels (almost $24). My companion had a mint julep, with bourbon, fresh mint, sugar and bitters served in a special metal cup, which cost a more reasonable 58 shekels ($16).

Remember that there’s also a ten percent service charge and 17 percent VAT, so the cost adds up. But it’s a lot cheaper than going abroad, and that’s what an evening here feels like.

The Garden Terrace is open from mid-June to mid-September.

Linda Gradstein is a wine and alcohol enthusiast. When she’s not drinking, she is the Mideast Bureau Chief of The Media Line, a US news agency. She lives in Jerusalem with her husband and four children.