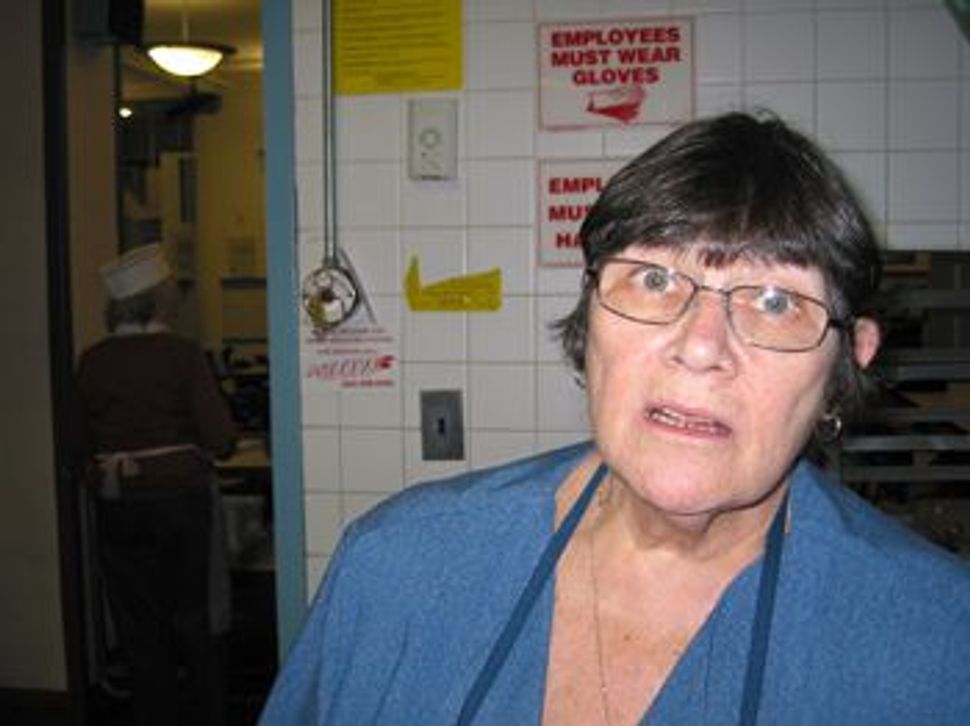 NunSense: Sister Lillian McNamara, Encore?s co-founder and director of its senior center, was angry when she saw the meals. ?I told our seniors, I don?t want this garbage to be fed to you.? Image by REBECCA DUBE 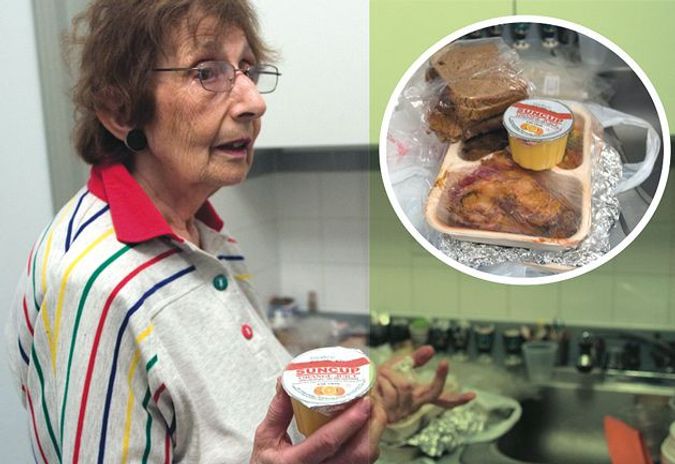 Unpalatable: Edith Speizer complained about the kosher meals. She said the vegetables were mushy, the fish portions were small and she had to cut away mold on the bread. Image by ARIEL JANKELOWITZ

Home-bound seniors on Manhattan’s West Side are complaining that the quality of kosher meals being delivered to them took a sudden turn for the worse this spring when new city contracting policies took effect — a situation some elderly Jews found so unpalatable that they actually decided to switch to receiving non-kosher meals.

“It was a lot of valueless calories,” said Edith Speizer, 78, who is receiving home-delivered meals as she recovers from knee surgery and a shoulder injury. She had been perfectly satisfied with her meal service until New York City reorganized its program and she began getting food from a new contractor in March.

The vegetables, she said, were watery, mushy and sometimes unidentifiable; the fish portions were smaller than a business card (she measured them and wrote down their dimensions); the chicken was dry and miniscule (“I didn’t know chicken came that small,” she said); the powdered milk was unwieldy to mix and didn’t last all week; and the bread sometimes showed up moldy. Speizer gamely cut the mold away and tried to doctor the vegetables with herbs to give them more taste, but she still found that the new meals left her hungry.

City Councilwoman Gale Brewer said that she heard about the problem from Speizer and many other Jewish seniors who were similarly dissatisfied with the kosher meals. “The food is horrible,” Brewer said.

Until recently, a variety of Jewish groups and community organizations had received city funding to provide kosher meals to the home-bound elderly on Manhattan’s West Side. But this spring, the city moved to consolidate home-delivered meal services in order to save money, awarding contracts to one provider in each geographic area and standardizing payment for both kosher and non-kosher meals. Some Jewish groups that had previously participated in the program decided against taking on the much larger caseloads and opted out.

The changes hit Manhattan in March. Brooklyn, the last borough to switch to the new system and the one with the largest number of seniors receiving kosher meals, started operating under the new contracting rules May 5.

On the West Side of Manhattan, from 14th to 110th streets, Encore Community Services won the city contract for home-delivered meals. The non-denominational community group, founded by two Roman Catholic nuns, assumed responsibility in March for delivering daily meals to more than 1,000 seniors, including about 90 who receive kosher meals. (Jewish agencies such as Dorot continue to provide kosher meals to some seniors in Manhattan, paid for by private donations.)

Encore dipped into its endowment to install new kosher ovens and refrigerators at its senior center in Midtown. But with no experience in kosher cooking, the group hired a city-approved subcontractor, Tov Kosher Caterer of Queens, to provide meals to its kosher clients — a common arrangement under the new, consolidated system.

But the nuns who run Encore say the arrangement did not work out as they expected.

“We aim for restaurant quality, and when the kosher meals arrived, I near died. I was so angry,” said Sister Lillian McNamara, Encore’s co-founder and director of its senior center. “I told our seniors, ‘I don’t want this garbage to be fed to you.’” 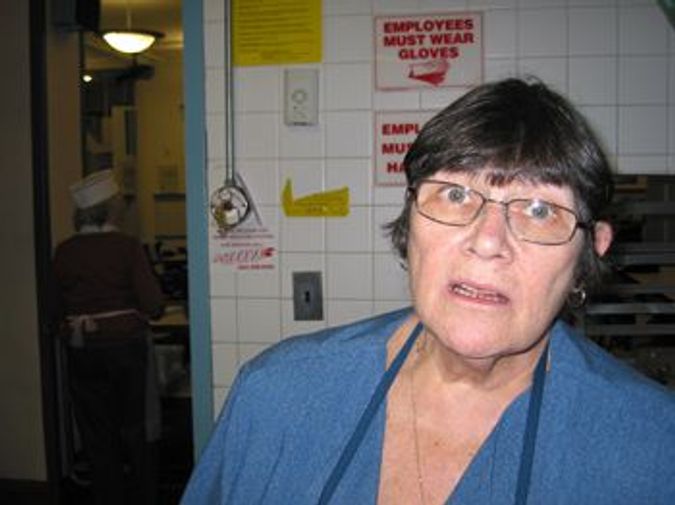 NunSense: Sister Lillian McNamara, Encore?s co-founder and director of its senior center, was angry when she saw the meals. ?I told our seniors, I don?t want this garbage to be fed to you.? Image by REBECCA DUBE

About 10% of Encore’s kosher clients have switched to regular meals, McNamara said. Most of those were people who got kosher meals because the delivery times were more convenient or because they preferred the taste. But for those who keep kosher out of religious conviction, switching was not an option.

“It’s not fair for me to be able to offer quality to everyone but them,” McNamara said.

The proprietor of Tov, which has been in business for more than 40 years, defended the quality of its meals for home-bound seniors.

“To tell me that it’s not fresh or that the quality is not there, it’s not true,” owner Josh Aaron said. “A lot of times it’s what happens at the other end that I have no control of.”

Aaron said that Tov also provides home-delivered meals for the elderly in other areas of the city. He said his company has not received complaints about its food from clients in other programs.

When the Forward contacted McNamara the last week of April, she was already trying to find a new subcontractor. At the beginning of May, Encore terminated its contract with Tov and hired another kosher meal provider. But the new contractor is more expensive, and McNamara doesn’t know how Encore will cover the cost.

The problems experienced by Encore, Speizer and other seniors in Manhattan, however, may be just the tip of the iceberg. The city’s funding formula for home-delivered meals pays the same amount for delivering kosher and non-kosher meals. This puts providers of kosher food, which tends to be more expensive, in a tight spot.

The current recession only puts more stress on the system. Across the country, publicly and privately funded meal services for the elderly are struggling with budget cuts, reduced donations and greater need.

“These are really, really, really tough times,” said Enid Borden, president and CEO of Meals on Wheels Association of America. Her organization has had to shut down programs in Texas, California, Colorado and Minnesota because of lack of funding, and other programs across the country are starting waiting lists for needy seniors. Whenever an economic crisis hits, Borden said, kosher meal programs feel the pinch especially hard, simply because of the higher cost of kosher food.

Under the old New York City contracting system, providers often negotiated higher reimbursement rates from the city for kosher meals. The new system pays a flat $7 rate for all meals, whether regular, kosher, diabetic or some other specialty.

“We can’t have a different rate for every type of meal,” said Caryn Resnick, deputy commissioner for the Department for the Aging. The city spends about $30 million per year delivering meals to 17,000 elderly people in their homes.

Brewer said she plans to ask about changing the payment rates for kosher meal services when city budget hearings begin May 11. But any increase in funding will be a tough sell in this economy. Mayor Michael Bloomberg’s proposed budget for 2010 would trim $1.4 million from the home-delivered meals program, which previously had been insulated from cuts.

At Encore, McNamara is facing her own budget crisis. She is confident that the new kosher subcontractor, which will take over from Tov in a couple weeks, will supply good food, but it will cost more — $4.60 per meal versus the $4.25 she was paying with Tov. Encore makes its regular senior meals in-house, and they cost about $3.25. (That’s food price alone; Encore also has to pay for packaging, transportation, insurance, delivery and other costs as well.)

Now, McNamara is trying to raise money from private donors to help subsidize the kosher meals.

“This is important,” she said. “It allows people to be independent and take care of themselves at home…. Hopefully to God we’ll start with a new vendor in a couple of weeks, and then we’ll figure out where we get the money.”

As for Speizer, she’s just glad that her complaints found a sympathetic ear in McNamara. Informed that a new meal provider had been found, she exclaimed, “Hallelujah!”