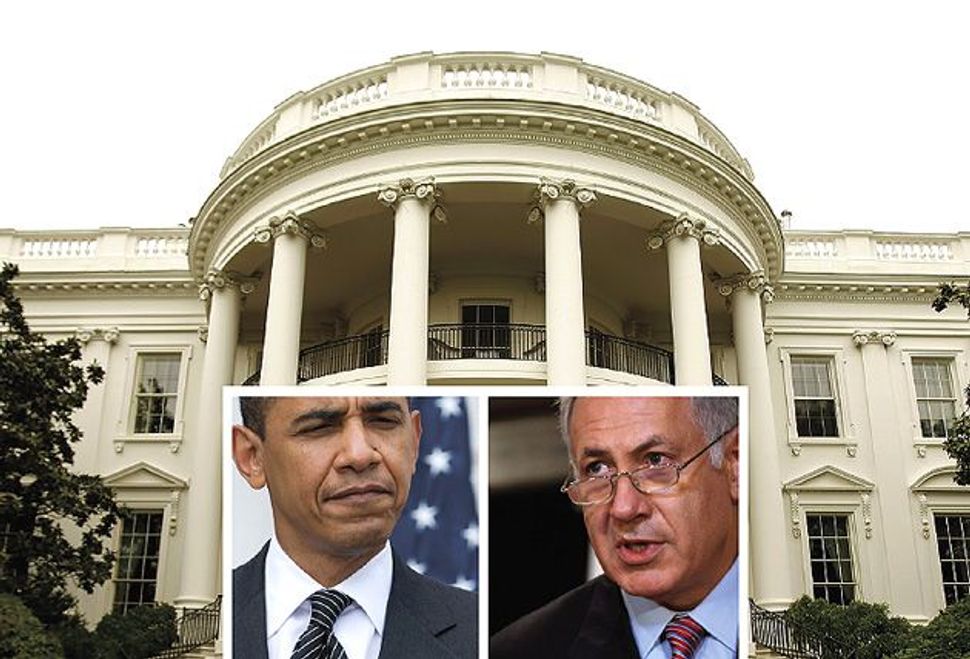 Face to Face: President Barack Obama and Israeli Prime Minister Benjamin Netanyahu will meet for the first time as their country?s respective leaders in an attempt to advance the Middle East peace process. Image by GETTY IMAGES

President Obama will seek to revive the moribund Middle East peace process in his first official meeting with Israeli leader Benjamin Netanyahu, offering a new regional initiative that aims to bridge increasing differences between the new governments in Washington and Jerusalem.

The new approach takes the 2002 Arab peace initiative another step forward by making clear that normal ties between Israel and the wider Arab world need not await the end of negotiations on the Palestinian issue.

But at their May 18 meeting, President Obama is expected to insist on explicit Israeli recognition of the two-state solution for the Israeli-Palestinian conflict as a prerequisite for moving forward — a step Netanyahu has so far resisted. He will sweeten the demand with a promise of broadening the negotiation circle to include all Arab and Muslim states.

Netanyahu, on the other hand, will try to focus on Iran and on the need to prioritize forging a regional understanding with moderate Arab countries against the threat from Tehran.

Obama’s regional approach, which is expected to also include a joint effort to counter Iran and move forward on the Israeli-Syrian peace track, will be discussed with leaders at the White House this month and could be rolled out as part of President Obama’s speech to the Muslim world scheduled to be delivered during his June 4 visit to Egypt.

But the plan hinges on Israel’s agreement to accept the two-state solution, an issue which is expected to loom over the Netanyahu – Obama meeting.

“Neither the U.S. nor Israel are looking to pick fights with each other, but this is not enough. Success will be judged on whether the leaders built a relationship of trust and converging interest,” said David Makovsky, co-author of forthcoming book “Myths, Illusions and Peace: Finding a New Direction in the Middle East.” “It is not enough for each to say what they cannot do, but

where are the areas that each can say, yes, I can?”

The Obama administration views the meeting within the context of a round of talks with regional leaders that began with Jordan’s King Abdullah and will continue later this month with Egypt’s president, Hosni Mubarak, and later with Palestinian President Mahmoud Abbas. In a May 12 statement, White House press secretary Robert Gibbs said that Obama intends to discuss with the leaders “steps all parties should take to help achieve peace between Israelis and Palestinians and between Israel and the Arab states.”

The new idea floated by the Obama administration is stressing the regional element of the peace process and assuring Israel that moving forward with the Palestinians will go hand in hand with improving its relations with both the Arab and the Muslim world. This approach takes the 2002 Arab Peace Initiative forward by making clear that normalization with Arab states needs not wait until the end of negotiations. Returning from his visit to Washington, Abdullah said the regional approach is now the plan to pursue.

“It’s the work that needs to be done over the next couple of months that has a regional answer to this. That is not a two-state solution, it is a 57-state solution,” Abdullah said in an interview with the London Times.

According to Israeli press reports and early statements made by Netanyahu’s close advisers, the Israeli prime minister will offer a variety of steps meant to improve living conditions for the Palestinians, but will stop short of endorsing a two-state solution. Netanyahu is expected to explain that since the future Palestinian entity will lack certain attributes of sovereignty (such as military force and control over its air space), there is no reason to use the term “state.”

So far, this approach has gained no support within the administration.

“How many times do senior administration officials have to say it before Israelis take them at face value? The U.S. is talking about an independent Palestinian state. Their goal is a two-state solution,” said Tamara Cofman Wittes of the Saban Center for Middle East Policy at the Brookings Institution. She added that given the wide degree of world consensus over the idea of a two-state solution, it would be unrealistic to try any other formulation.

Netanyahu, according to Israeli diplomatic sources, will make clear in his discussions in Washington that the coalition he heads has only limited room to maneuver on the Palestinian issue and that given the widespread disappointment in the Israeli mainstream with Palestinian leadership, focusing on Palestinian self-determination would be a mistake at this time.

Middle East expert Stephen P. Cohen, a scholar at the Israel Policy Forum, argued that Netanyahu’s claim of political limitations would not go very far with the Obama administration. The White House is aware of the fact that Netanyahu could form an alternative coalition if the current one collapses. “All he needs to do is to turn to Tzipi Livni,” Cohen said, referring to the Israeli opposition leader who was willing to join his government if Netanyahu changed course on the Palestinian issue. Cohen added that the administration is also aware of what he sees as Netanyahu’s weak point. “Bibi is susceptible to pressure if it is applied directly,” he said, pointing to an instance in Netanyahu’s first term as prime minister, when he gave in to American pressure to accept the Wye River interim peace agreement.

George Mitchell, America’s special envoy to the region, has been meeting in recent weeks with American Jewish groups and making clear the administration’s commitment to pushing forward the Israeli-Palestinian peace process. These talks, an official with one of the Jewish groups speculated, are aimed at preparing the ground for a possible conflict of views between Israel and the Obama administration over the Palestinian issue, and at mitigating Jewish reaction to this.

Netanyahu, meanwhile, intends to focus on the importance of dealing with Iran’s nuclear threat in his meeting with Obama.

Defense Minister Ehud Barak said Israel would like the administration to put a strict time limit on the talks it is now planning with Tehran and to move ahead with tough sanctions if an agreement is not reached by that deadline.

United States officials have argued that this approach is counterproductive. “I think it’s not appropriate at this time to be trying to establish timetables for this, but rather to see how the engagement can move forward,” National Security Council spokesman Mike Hammer said at an April 29 briefing for the foreign press.

“The administration is torn on this issue,” said Shai Feldman, director of Brandeis University’s Crown Center for Middle East Studies. He explained that while the United States understands Israel’s concerns, America also believes it cannot publicly accept Israeli preconditions. “That would be seen as if Israel is determining the parameters of engagement with Iran,” he said.

According to Elliott Abrams, who served as deputy security adviser in the Bush administration, reaching agreements regarding Iran will be the central issue at the meeting. “This portion of the meeting will be fateful,” Abrams wrote in a May 9 article in The Wall Street Journal. He argued that if Netanyahu senses Obama is not willing to use force in case engagement and sanctions fail to stop Iran, and if he feels “that Mr. Obama is plenty smart, but will never risk confronting Iran,” then, Abrams wrote, Netanyahu “may resolve that an Israeli strike on Iran is unavoidable.”

The Israeli prime minister will try to make the case that the Iranian crisis is an opportunity for realignment in the region, one that would unite moderate Arab regimes and lead them to join forces with the United States and Israel to stop Tehran’s quest for regional dominance. But for that to happen, the administration argues, Israel first needs to agree to move forward toward a two-state solution with the Palestinians.