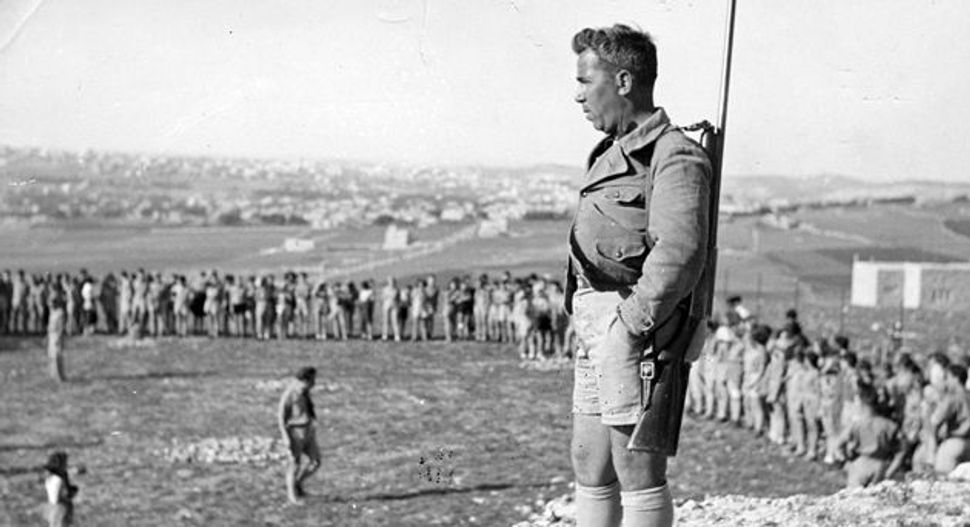 Growing the State: An armed man stands guard at a meeting of young pioneers in Palestine (1938). Image by FORWARD ASSOCIATION

Over the past year, a who’s who of Jewish performers has made a pilgrimage to Livingston, N.J., a well-to-do suburb of New York City, to record interpretations of old Israeli pioneer songs.

They sang and played in an unoccupied three-story home, where a drum kit was often set up in the 18-foot octagonal foyer inside the front door. Musicians helped themselves to bagels and coffee laid out on a marble bathroom counter. And in a bedroom upstairs, used as the control room for this odd recording venue, sessions were presided over by an Orthodox rabbi who happens to blow a mean saxophone. The mission? Raise funds for cancer charities.

This Pioneers for a Cure project is the brainchild of a Manhattan-based Jewish not-for-profit called Joodayoh Arts. After a year of recording and mixing, digital downloads of the pioneer songs are being sold on the Web, at http://www.pioneersforacure.org. The project just may revive a piece of music history that began in the 1920s with the Keren Kayemet, known in English as Jewish National Fund, commissioning the composition of folk songs that could be sung by all the Jews who immigrated to Palestine.

It is a rich musical tradition, according to Marsha Bryan Edelman, an authority on Israeli folk music and a professor at Gratz College in Pennsylvania.

“In the early years, there were a lot of songs, ‘We will be the first, we will be the pioneers,’” Edelman said. But by the third and fourth aliyot, when the hora had become popular, many songs trumpeted the notion of “work all day and dance all night.”

Rabbi Greg Wall, a respected sax player who leads the band Hasidic New Wave, has served as the producer of the Pioneers for a Cure project. Wall found a treasure trove of sheet music for the pioneer songs in the archives of Brandeis University.

“He started unearthing compositions and developed this Indiana Jones attitude about rescuing these tunes from obscurity,” said Ricky Orbach, founder of Joodayoh and front man for the alternative rock band Kohane of Newark, which recorded one of the pioneer tunes.

When the first batch of pioneer songs was recorded in the 1920s, the Keren Kayemet sent out hundreds of thousands of postcards with the melodies and lyrics of the songs to Jews all over the world. And in the 1930s, a German-Jewish ethno-musicologist sent postcards of some songs to prominent Jewish composers in the hopes that they would compose new works based on the original pioneer melodies. Darius Milhaud, Kurt Weill, Aaron Copland, Ernst Toch and Stephan Wolpe agreed to do so.

Wall said that when it was time to reach out to contemporary Jewish performers, he simply e-mailed them a scan of one of the original postcards.

“They would get the music on a virtual postcard, not learning from another recording, not basing it on anyone else’s version, just getting the DNA of the music: a melody and a text,” Wall said.

“When I heard that I could sing to help, that was healing for me,” said Karen Rosen, a Scottish-born New Jersey rocker who was diagnosed with breast cancer in 2006. Rosen sings “Yeled Kat” (“Little Child”) in Hebrew, with a slight trace of her Scottish accent.

Pharaoh’s Daughter put a Beatlesque instrumental intro onto a pioneer song called “Hinei Achal’la Bachalili” (“Lo, I Play on My Flute”) and proceeded to play the tune with a Brazilian groove. The song was written by Mordechai Zeira, one of the “fathers of Israeli song.” It turns out that Chava Sharlin, the mother of the band’s accordion player, Uri Sharlin, worked with Zeira at Israel’s national electric company when she was a teenager.

Uri grew up on the pioneer songs in Israel.

“They still play in my head,” he said in an interview at his home in the Harlem section of New York. “Even after doing different types of music, I guess there’s still something that I can relate to.”

George Robinson, a music critic for several Jewish newspapers and magazines, called the Pioneers for a Cure recordings “a great sampler of what’s going on in Jewish music right now.” He noted that the project’s anthem, “Am Yisroel Chai,” is a “great jamming track. It works really well as a place for singers and instrumentalists to stretch out.” Made from more than 90 instrumental and vocal tracks laid down by all the participating performers, the seven-minute anthem was mixed by legendary West Coast engineer Bob Clearmountain, who counts major albums by Bruce Springsteen and the Rolling Stones among his credits.

“Am Yisroel Chai” is one of some 30 songs currently offered online for a minimum of $1.99. Contributions of $9.99 or $99.99 per song are encouraged. Proceeds from each song are directed to a specific cancer charity selected by the artist who recorded it. Pioneers for a Cure is being touted as a green project. No manufacture of CDs or their plastic cases is involved.

Work is already under way on a series of American pioneer songs, also to benefit cancer research and care.