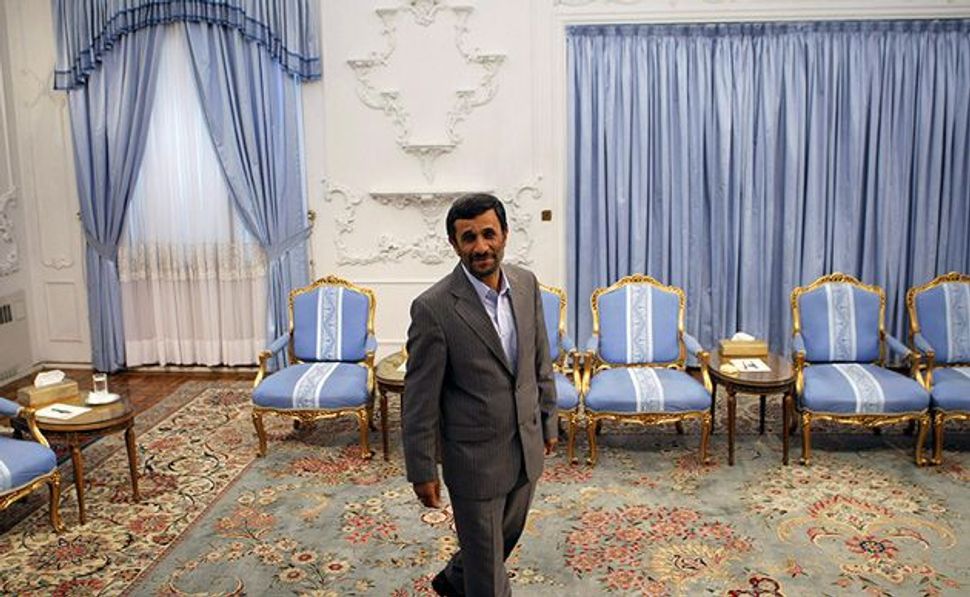 Iran’s descent into instability has confronted Israel and its American supporters with a dilemma in choosing between two competing approaches: one based on human rights, and the other on realpolitik.

Israeli officials might personally be rooting for the fall of Iranian President Mahmoud Ahmadinejad, whom they view as a tyrant. But at the same time, some fear that his defeat would set back their fight against Iran’s nuclear ambitions.

As a result, Israelis in official positions have avoided, for the most part, publicly taking sides between presidential candidates as the disorder in Iran has intensified over Ahmadinejad’s disputed June 12 election victory. Still, some public and private remarks have slipped through the cracks, shedding light on the debate in Jerusalem.

In testimony before the Knesset’s Foreign Affairs and Defense Committee on June 16, Dagan said that a Mousavi victory would have required Israel to “explain to the world the danger of the Iranian threat, since Mousavi is perceived in the international arena as a moderate element.”

Dagan went on to argue that on the nuclear issue, there is no difference between Mousavi and Ahmadinejad, the latter of whom has voiced doubt about the historical existence of the Holocaust and expressed his wish to see Israel liquidated.

Last May, speaking at the annual conference of the American Israel Public Affairs Committee, the pro-Israel Washington lobby, Ilan Berman, a hawkish Iran scholar at the American Foreign Policy Council, called Ahmadinejad “the gift that keeps on giving,” since his harsh rhetoric compels the world to take him seriously.

In the long term, Iran’s rapidly changing profile could mean a difficult challenge for Israel. If Iran is indeed in the process of change, as most analysts agree, Israel could end up the lone voice advocating a tough stance toward it, while Washington and the world seek ways to reach out and embrace the change.

“Already, in Washington policy circles, the Israelis’ mantra, let’s bomb them, has gone off the table,” said Marshall Breger, a former Reagan and Bush senior White House aide and Orthodox Jew who has been engaged in interfaith dialogue with senior Iranian clerics. “It’s not considered serious.”

For now, Israeli leaders, including Prime Minster Benjamin Netanyahu, have tried to maintain an approach similar to that of the Obama administration as events unfold, condemning the brutal suppression of demonstrators without publicly supporting the reformists’ claims of electoral fraud.

But Dagan’s harsh and more candid analysis did draw detractors in what is clearly an ongoing internal debate. Ephraim Halevy, a former head of the Mossad, termed it “simplistic” to say there is no difference between Mousavi and Ahmadinejad on the nuclear issue. “No one can predict what Mousavi would do” if he emerges as the winner of this standoff, Halevy said in a June 21 speech in Jerusalem. Halevy believes there will be “a new ballgame in Iran” if that happens.

For Israel and pro-Israel activists, the crucial question that remains is how events in Iran will affect Tehran’s foreign policy. The Israelis’ goal is to stop Iran from enriching uranium it claims it needs to develop civilian nuclear power but that could potentially be used for nuclear weapons.

No one knows how Mousavi would approach this issue if he gained influence in the end — an eventuality most analysts still consider unlikely.

The only clue thus far comes from an interview that Mousavi gave the Al-Jazeera news network a day before the June 12 elections. He said the West should not expect Iran to abandon its quest for nuclear technology, but he stressed, “What we can talk about, in the international level, is whether we deviate toward the development of nuclear arms.”

This may hint at possibilities for an approach long advocated by Ray Takeyh, a prominent Iran analyst recently appointed to a senior State Department Iran policy post.

Takeyh and others advocate a U.S. “détente” with Iran that would include a negotiated agreement to enforce much stricter control and monitoring of Iran’s enriched uranium. Takeyh argues that this could prevent its diversion to any military use and yet allow Iran to enrich it, as permitted under the nuclear Non-Proliferation Treaty.

Breger agreed that this was likely the direction developments will take if there is eventual progress with any government in Tehran.

“All Iranians believe they have a right to nuclear technology,” he said. “But many moderates are more interested in economic development than in exercising that right.

Breger, who served as Reagan’s liaison to the Jewish community, added: “This is a problem for Israel, since as long as there is an Islamic republic, Israel doesn’t want strict inspections, they want regime change.”

The real problem for Israel, he explained, was not the prospect of Iran dropping a nuclear bomb on it — a prospect he viewed as unlikely because of Israel’s own nuclear deterrent — but that “an Iran with nuclear capability, even with no weapons, will constrain Israel’s freedom of action. Israel’s first military principle has always been, they must have total regional military hegemony, or as has been more politely stated, a qualitative military edge.”

“Solutions [to the nuclear issue] that can satisfy the U.S. security needs might not satisfy Israel’s sense of security,” Breger said.